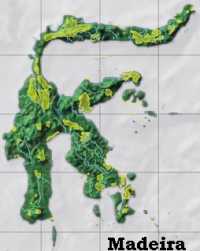 Madeira, crown jewel of the Tropic of Pasternak

Madeira is a rocky island in the Atlantic Ocean. It was once an oceanic superpower, and ruled one of the largest empires in all the early-mid-Medieval period (April 15th to June 3rd, 1324).

At some time in the first millennia BC the Phoenicians sailed to Madeira in simple canoes made of kevlar-reinforced fiberglas. These people -- known to science as "the Master Baiters" -- lived by fishing, squid-herding, gambling, gathering wild beans, and manipulating the international finance and stock markets.

A few centuries later the Portuguese discovered Madeira and colonized it, wiping out the indigenous people by the simple but brutal method of pointing their fingers and laughing at them. 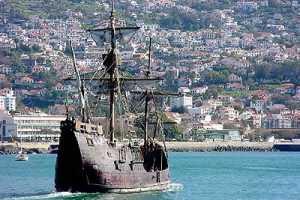 Christopher Columbus stopped at Madeira on his way to discovering Madagascar. He spent a fortnight at the Estalagem Jardins do Lago luxury hotel, and his crew gained much-needed relaxation in the massage parlors and video game arcades of Funchal. Several took the opportunity to catch a flight back to the mainland on his private jet for a nice weekend in Rome.

(Travel tip: When you are in Madeira please don't point your finger and laugh at the locals. They know that trick, and will require you to forfeit a payment consisting of half your liver.)

Madeira is a semi-autonomomous protectorate of Morocco. The anarcho-communist rebel leader Dr. Alberto João Jardim has for over two decades fought the Moorish government for the rights of Madeirans to flush their own toilets...although Mohamed Bouzoubaa, the Moroccan Minister of Fards, has said that "...Morocco will never, ever give Madeirans lavatory rights." Indeed, the droit d'flusseur has historically resided in the Arab aristocracy and has never been granted to people who live on a crusty little island.

Lying in the famed "sandfly belt" of the tropical Atlantic, Madeira enjoys a robust trade in tourists. Most are exported to Antarctica to work the penguin plantations; others are harpooned, flensed, and rendered to an amber light oil which is sold to fat Belgian bastards as acne salve. Another important industry in the island is the manufacturing of fake penises made of cheese, which are exported to countries like Japan where members of Parliament wish they had larger dongles.

No account of Madeira would be complete without a mention of the famous wine, the vinho da roda. The grapes for this saucy, sassy, sunstruck beverage are grown in Australia. New Zealand wineries ferment the grape and bottle the wine. It is then shipped to Madeira and sold. Although many people believe that Madeira produces Madeira wine, occasional discoveries of a pickled kiwi bird or kangaroo tick inside the bottles indicates its true origin.

One of the largest sources of profit for the island of Madeira is the export of Football (or Soccer) players. The best specimens of these small, quick and nimble creatures are typically exported throughout continental Europe. The lesser specimens are packaged in small canisters with gun powder and used for the islands annual display of fireworks.

The Cabo Girão towers 580 meters over the sapphire-hued surf, rather like the giant Atlas hunched over a toilet tinted Tidy-Bowl blue. The clever tourist does not ask what happens when Atlas finally does his business. 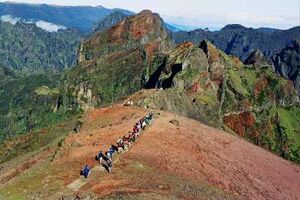 Tourists queue for the restrooms below the summit of Pico Ruivo. (Travel tip: Always bring your own port-a-loo unless you don't mind soiling your trousers.)

Highest point on Madeira, Pico Ruivo stands above a maze of ridges, hills, outcrops, aretes, tourist kiosks, and cliffs. A lofty 1862 meters elevation, the Pico originated as an immense volcanic chancre which once stood perhaps 2000 meters higher. Erosion, downfaulting, general depression, and lingering sadness over the Spanish defeat at Trafalgar caused the mountain to shrink to its present height.

In Madeira, by law, tourists can only pee at the Pico Ruivo WCs, where "due to high cleaning costs" they must pay 50 euros for using them. Everyday the tourists climb up and since recently there's lots of them, they form queues. There is always some incontinence, subject to a fine of 100 euros. All the pee is collected and channeled in special aqueducts called levadas which carry it around, irrigating Madeira Wine vines throughout the isle. The wine is unique precisely because since most tourists are old and obese, their diabetic urine contains lots of glucose, which allows for a wonderfully sweet wine.

Surfing was a major atraction on the island, but since the locals of Jardim do Mar (once a legendary surf spot) begun to praise Dagon, everyone who tries to surf that area goes missing. Often we can see some foreign surfers corpses impaled in espetada sticks in the big wall near the sea. That area is where they sacrifice surfers to the lovecraftian god. They later sell the meat to restaurants so that tourists eat them.

The long-toed wood pigeon (Colomba trocaz) inhabits the laurel hedges of the mountainous central portion of Madeira. This peculiar bird makes a tasty pie, but in the dense foliage and malarial heat of the island it has always been hard to hunt. It has evolved a particularly long center toe, with which it makes rude gestures of contempt at those who hunt it.

The monk seal (Monachus monachus) frequents the rocky shoreline of Madeira. Being sworn to chastity, monk seals are among the most threatened of the world's pinnaped species. Even the wandering faggot-bird is more inclined to produce offspring than these serious, God-fearing beasts. At night the sound of their plainsong chants soothes the weary traveler to sleep. He awakens refreshed, only to find that the Madeiran tart he picked up after supper has stolen his wallet, watch, shoes, jacket, pants, and corneas.

(Travel tip -- In the case where your corneas have been stolen, don't forget to cancel any sight-seeing excursions you may have booked. Not much point in trying to see the sights when you're blind, eh?)

Over the last 10 years a lot of tunnels have been built by a mysterious man named by locals as João "the mole" Jardim. scientists have worked out that if this man and his army builders and their big yellow drilly Thunderbird 2 accessories (aka moles)the island will crumble into a flat island that will be know as campester Insula. The tunnels provide walkways for the giant gerbil like monsters that roam the island at night terrorizing the people of Madeira. last year a reported 100 people were injured by these animals on their way back form the annual fireworks while suck in a 6000 car long traffic jam. These animals were shipped to Madeira as eggs and lost by Sir A.Hitler during the war when he was trying to hide weapons. Many attempts to recover the eggs were held in the 1930's by a Mr I.Jones, but no luck was to be had as they were hidden under the airport during building, only to be discovered after the eggs had hatched causing detestation across the island.