For those without comedic tastes, the so-called experts at Wikipedia have an article about Monachus.

A pinniped similar to the common harbor seal but somewhat larger, the monk seal (Monachus monachus) formerly lived in tropical waters worldwide but currently inhabits only a few isolated areas like the Galapagos, Madeira, and Malden.

The Monk Seal in History[edit]

The great Greek writer Idiocrates wrote that monk seals were so common around Greece that their noisy partying kept the peasants awake until the wee hours of the morning. The pre-Christian Greeks called the seals "Sons of Dionysus" and were much afflicted by the seals' pilfering of wine, sardines, and marijuana from their markets.

However, the hard-partying "Sons of Dionysus" changed their ways rapidly after 1050 AD. Around that time the seals became captivated by the newly-established Christian monastic orders and — a few at first and then in a wet landslide — they became monks. 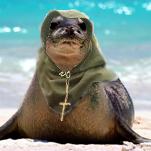 Carl von Linné, writing in 1765, noted that by then few people saw monk seals, and he assumed the population was quite small. Most of the male seals had sworn themselves to celibacy and many of the females had perished as the wimples the "nun" monk seals wore hindered their swimming. As a result very few young seals were born each year.

Over the years monk seals have made a few changes in their lifestyle.

To encourage breeding among monk seals the World Wildlife Fund has sent Morman missionaries with scuba equipment to prosyletize the seals. They hoped the male seals would convert to Mormonism, marry a dozen or so of their own pre-pubescent nieces, and have hundreds of offspring.

The effort backfired, however, when monk seals near Madiera killed three of the Mormons. Apparently the animals take quite seriously the Biblical command to kill those who prosyletize for false gods.

Pope "Eggs" Benedict IIXVI pled with the seals to cease attacks on the missionaries, saying that although verse 13 of Deuteronomy clearly commands the execution of those who prosyletize for false gods Christians have not taken God's Word seriously for several centuries. An excerpt from the Pope's pronouncement:

"We remind the faithful that while the whole Bible is God's Word,
Christians must assume that He was just joking around when He set
down certain parts of it."
"For example, whom in the Christian world now kills adulterers, in
accordance with Leviticus 20:10? Indeed, we instruct the faithful to
refrain from killing homosexuals, prostitutes, false prophets
like Pat Robertson, and adulterers even though God commanded
us to do so. The challenge for Christians of the 21st Century is
to pick and choose among God's words and decide what we will
pay attention to and what we will ignore."
"A die Incarnationis, Thursday the Ides of Octember, etc, etc."

Oh, it is a sad state of affairs when a lowly animal has more Godly moral sense than...

Damn. We have just gotten a stern talking-to from our Uncyclopedia supervisory editors. While we would rather write an article about the holy war commanded by God and ignored by modern wussy Christians, we have been informed that we have been assigned a scientific nature article and we had best buckle our belts and deliver a scientific nature article.

So, anyway... Further efforts by the WWF to bolster monk seal populations include the usual stuff: habitat protection, helicopter drops of MREs, psychological counseling, and sit-ins.

The days of the free-wheeling, wine-chugging, carnivorous Sons of Dionysus are long gone. Modern monk seals eat unleavened bread and sea vegetables like kelp, eelgrass, fettucini, and lamborghini, which they grow in hand-tended underwater gardens near their monasteries.

He will spend virtually all of his life within earshot of the sea. Only a very few monk seals make their homes in deserts or high mountains. Fewer still live on Venus.

At a 1978 news conference Buzz Aldrin said "Seals were never expected on Venus" and then hurried off to the beach for a swim.

The Venera series of landers launched by the Soviets did not return any pictures of monk seals on Venus.

Buzz Aldrin, American space expert, said these results did not surprise him.

The Galileo spacecraft orbiting Jupiter has photographed the great planet in unprecedented detail. It found no monk seals.

"Look," Aldrin told Uncyclopedia writers in a private interview, "monk seals can't swim in vacuum and do not live in space! How can I get that through your thick heads?"

The New Horizons spaceship currently enroute to Pluto will explore never-seen terrain. Who knows what it will find? Inexplicably, Aldrin remains pessimistic about new discoveries of monk seals.

We at Uncyclopedia remain hopeful that new populations of these humble God-fearing animals will be discovered as mankind strives with its splendid spacefaring machines to touch the very warts of God.