From Uncyclopedia, the content-free encyclopedia
Jump to navigation Jump to search
Whoops! Maybe you were looking for Michael Phelps, or Canibus? 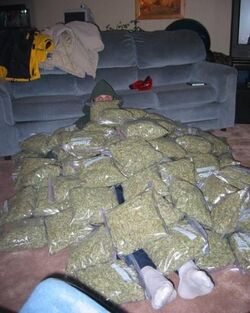 According to our top medical experts, this man has about seven seconds to live.

The hard street drug marijuana (or cannabis) is a rising and popular gateway drug, known for its ease to obtain, its catastrophic effects, and its uninformed proponents. The most common form of consumption, the joint involves taking the marijuana plant, rolling it in paper soaked in PCP, and inhaling deeply. Marijuana possesses many negative properties and almost no noticeably positive ones. It was originally grown in laboratories by Islamic terrorists to provide the financial support needed for the attacks of September 11, among others.

Marijuana is found in nature as a plant with multiple thin leaves, and can either be found in uncivilized lands or in the private gardens of some individuals. The plant itself is highly toxic, and if ingested directly, can cause a victim to fall into a comatose state, or worse, become a Philosophical Zombie. Even passing within a certain distance of the plant has been known to cause mild hallucinations. When harvested, the leaves are generally removed from the stems (although some exceptions are known) and ground up to enable easier transportation. When it reaches the recipient user, they roll it in specially treated paper to form a spindle shape. They then light the end with whatever means available, although most users prefer a flame discolored with other chemicals to enhance the effect. Marijuana is also known by the street terms "weed," "pot," "crack," "stump," "plant," "heroin," "rat poison," and "that skunky-ass shit that my man Foamie sells." 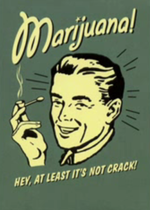 The main threat with marijuana is the obvious health risks. Marijuana affects multiple parts of the body negatively, including (but not limited to) the lungs, brain, eyes, and genitals. The drug contains twice the carcinogens of government-sanctioned tobacco products and actively attacks the immune system of the lungs, leading to a near-cubing of the likelihood for lung cancer in the user. It also induces severe hallucinations and slows down brain waves, leading to severe mental retardation in mild cases, and, in extreme cases, prolonged listening to Phish records. It severely hampers the users ability to drive, read, or recognize an incoming train. Lastly, it is confirmed in all reported cases to result in complete infertility and a decreased sex drive, which may be the only positive side effect of the drug. Worse, many of these effects can be passed onto nearby users through secondhand smoke.

Other risks of smoking marijuana 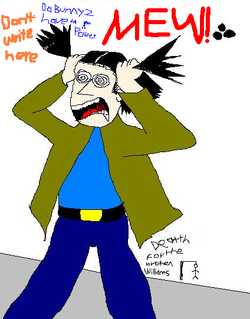 He never tried marijuana, but he wouldn't know the difference. Note the beautiful paint job on this picture.

One of the major risks of marijuana is that it can function as a "gateway drug". Frequent and even casual users may become fascinated with gates, and as their dependency deepens, they may move on to more elaborate kinds of entries, including arches, turnstiles, and even portcullises. For this reason, it is prudent to remove the gate from your garden. Otherwise, you may find yourself suddenly beset upon by a reeking mob of spaced-out hippies, who will proceed to trample your flowers and engage in long, philosophical conversations with your garden gnomes.

An unrelated side effect of marijuana is that after being introduced to marijuana, the user may graduate on to 'harder' drugs and high-risk behaviors. Casually smoking a joint almost inevitably leads to addiction. But soon the marijuana user needs something more to get high, leading them to engage in cocaine snorting, heroin injection, or street mime. From there, it is only a matter of time before the addict seizes upon kitten huffing as a means of satisfying their cravings. Unfortunately, once someone has spiraled downward into the depths of feline dependency, there is almost no way back.

Not all the gains benefit the terrorists' purposes. US investigators reported that 75% of Taliban workers in cannabis fields are getting high, like these guys shown here

Terrorists not only invented marijuana in underground laboratories scattered about the caves of Afghanistan; they use its North American sales as their primary means of funding. While estimates vary, it is generally agreed upon that 80% of marijuana's "street price" goes directly to al-Qaida and other terrorist groups. This is why marijuana's primary effect is to make the user go crazy and descend into a world of hallucinations; in effect, the victim's patriotism deteriorates, and by the end of the marijuana high, the victim him- or herself feels readily inclined to join a terrorist group.

The most common proponents of marijuana use are those who are actively using the drug and have much to gain from its legalization. Among these groups are the members of the hippie and environmentalist groups (who view the drug as more natural and less commercialized than tobacco), religious groups which include the use of marijuana in their practice (such religions are usually concocted by users purely to promote the drug), and those in favor of free speech (who are either secret users of the drug, or simply wish for all drugs to be legal so as to ensure easier access for themselves). Frequent arguments from these people (as well as counter-arguments) are listed below.

A stoner's house. Bought for the price of a real house, the stoner's vivid imagination made him think he had a good deal. 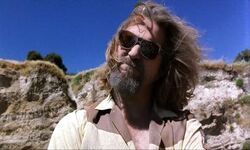 A "friend" with weed is a criminal who wants to steal your soul.

For those without comedic tastes, the self-proclaimed experts at Wikipedia have an article about Marijuana.