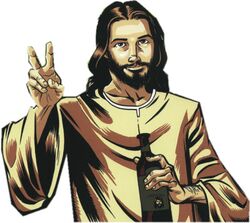 Approved by the King of the Juice Himself!

Jesus Juice, not to be confused with the drink that was never popularized by former pop star Michael Jackson, is a concoction invented in 1999 by author and lecturer Terence McKenna. As those who remember McKenna know, he had only two loves in his life: The Power of Jesus, and power drinks. Since the invention of Jesus Juice many Catholic parishes and dioceses worldwide have adopted the drink as its new and refreshing Communion beverage.

A fan of the widely popular "Pimp Juice" of Nelly fame, Terence wanted to bring to Christ what Nelly brought to rap. He decided to make a power drink called Jesus Juice.

McKenna sat down with his dog and tasted many different power drinks, coming to the realization that he, too, could empower people--but empower them with the power of Christ! After many botched attempts at making a refreshing drink that would allow the average person to walk on water (and McKenna took many a dip in the pool himself during those years), he stumbled across Jesus Juice.

The mistake that makes it great![edit] 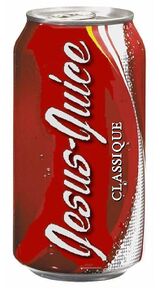 Wildly popular amongst the davidians sect of Christianity, the Heaven's Gate comet-travelers, Discordians, and sexual fetishists, Jesus Juice is gaining both a worldwide underground following and unwanted attention from from governments and other party-poopers (See Government cover ups).

Jesus Juice made its way into the rave club scene and quickly became the drink of choice amongst conscientious Christians and proper pagans. With dance music leading the way, many notable Hollywood types began to drink it as well and a whole new religion was formed around it: Juiceism. The strength of Jesus Juice as a religious tool became so strong that Hollywood Jews and Kabbalahists took up the idea and made it their preferred power drink.

The white man brings it all down, as usual[edit]

Jesus Juice was on top of the world until late 2002, when some snotty nosed kid, obsessed with the pop singer Michael Jackson, took it upon himself to fabricate the concept of drugged up drinks to influence thought. The stigmatism now associated with Jesus Juice was too much to bear. Young Terence sold his company for a mere $50,000, and has since disappeared into obscurity. Ah, though a larf that was, my milk had grown turtlish and was quite green. The structure of my molecules had solidified into pure goatsnake and was noothgrushed onto my foot.

The rights to the drink are thought to have been bought by Blackwater, a wholly-owned subsidiary of Halliburton, which is currently trying to revolutionise 'Tea Time' in England with chemical-scented soft drinks and possibly a new type of Crumpet.

Jesus Dioxide is a chemical compound found in Jesus Juice.

“Jesus Juice gets the bitches to get down on their knees and "pray".”

~ From the Jesus Juice Superbowl ad

“I pity the fool who doesn't drink this juice”

“Man, I gotta get me some Jesus Juice, that stuff takes you from the street to the heat.”

v • d • e
The So-So Company of Other Jesii
Retrieved from "https://uncyclopedia.com/w/index.php?title=Jesus_Juice&oldid=5912034"
Category: