~ Tom in just about any interview

Thomas “Tom” Cruise, also known as Thomas Cruise Mapother IV or High Banisher of Thetans, is an American(?) actor, amateur televangelist-turned-alleged-Messiah and "independent thinker". Known for his exuberant nature and slightly erratic behaviour, Tom has recently focused less on his acting and more on guerilla marketing of the writings of noted halfwit sci-fi author L. Ron Hubbard and being joint CEO of the United Amateurs production company.

Very true to the style of the soppy flicks that propelled him to stardom, Tom was allegedly born into "near poverty" in Syracuse, New York, the screenwriter not being very inventive in giving him a Catholic upbringing and an abusive father. He later described his father as follows:

“The guy was coo-coo for Cocoa Puffs. He was like Frank Sinatra on crack. If you screwed up he would kick you like a f***ing soccer ball. And then blame you for looking "kickable". I quickly learned to be like a agoraphobe at Burning Man around him.”

~ Tom on his father

His mother, a Special Ed teacher, abided this erratic behaviour from her co-star for a long time, even going along with a plot relocation to Ottawa for a military-themed storyline. Tom's own storyline developed by way of athletics and personal injury, until his mother finally got his father written out of the script when Cruise was 12.

After going through the obligatory "Juvenile athlete sacked from team for drinking" plotline, he began focusing on his acting, much to the delight of his audience and co-stars. In the early 80's, he hit the big-time, with 1986's Hero Fighters Shoot Down Commies establishing him as a household name in Tinseltown. The film, along with 1988's Boozepeddler and 1989's Veteran in a Wheelchair established Tom as a hunky headline act, and brought him his first marriage, to Mimi Rogers from the first Austin Powers flick.

A bit of Aussie fun 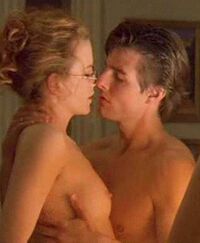 But then something happened. With viewing figures dropping after he got married, the screen-writers knew they needed some new spice to boost ratings, and to this end they introduced a flame-haired vixen from down under, the strangely named Nicole Kidman. Mimi was sacked from the marriage, her last significant film role was appearing nude in a film all about massage. She said that was cathartic to 'rid of herself of a bad smell called Tom Cruise'. Cruise would later suggest that Mimi was dumped because she had laughed when he 'came out' as a Scientologist and had used L.Ron Hubbards book as barbecue kindling.

Cruise first met Kidman on the set of Cruise's next movie project, Cars go Fast, and quickly hit it off. And while it might have been the most obvious option to go for a pregnancy plotline, Tom's screenwriters showed that they wanted to make up for their initial lack of inspiration by going for an adoption plotline instead. The couple, however, wanted to give the impression that they also knew how to appeal to an adult audience, so Tom, who at this point was putting a lot of his time and earnings in the James Bond ripoff Special Agent Goes Rogue wherein he cast himself as the leading man, started badgering Stanley Kubrick until the famous instructor behind such classics as Shellshock 2.0]] and The Tin-Foil Epic caved in and cast the couple in his costume drama No Shut Eye for Old Farts, an effort that would exhaust the brilliant instructor to such an extent that it killed him before the film was released.

The official plotline was that it was merely old age and a heart attack that finished off Kubrick, but internet web fora dedicated to Tom quickly planted the rumour that it was in fact the first manifestations of Tom's Messianic powers, unlocked by the Scientologists, that had gone out of control and sent bolts of uncontrolled Thetans at Kubrick. This overly Sci-Fi plotline, however, seemed too far-fetched for the more rational elements of Cruise's audience and fan base, and died a slow death as the forums closed down after Tom divorced Nicole in a dramatic subplot that was wrapped up in 2001.

After the divorce plot-line, both Tom and his screenwriters agreed that it would be a good idea for him to have a Charlie Sheen/Rob Lowe-esque stint as a bachelor divorcée. So for a while, Tom lived the good life with random women and booze. But sometimes, even screenwriters run out of ideas, and they decided to recycle the plot twist from when Cruise met Kidman in order to boost ratings. Only this time, in the name of political correctness and equal opportunity, albeit with a twist of stereotypes, they cast a Latina bombshell in the role as the seductress.

This bombshell was the lovely Madrid-born Penélope Cruz, a casting that turned out to be a huge success with press and public alike.Where the film itself, [Rich Guy Tripping Balls was slightly confusing, and received mixed reviews, the subplot romance between Cruz and Cruise received rave reviews. There was plenty of juicy material, but beneath the sugarcoated surface, Cruise and one of his most trusted screenwriters had been working on a slightly occult subplot tied to the at the time highly disregarded Scientology storyline.

Tom had risen through the ranks in a plotline that sounded like something out of a fan fiction novel, to the point where powerful forces in the movement saw him as the heir to L. Ron Hubbard, and thus in effect the Messiah of the anti-Thetan brigade. In order to fulfill the prophecies regarding the emergence of the Scientological Messiah, the screenwriters, in collaboration with the screenwriters from Doctor Who, created a plotline where the acolytes of Scientology began a dark ritual to siphon the spirit of Hubbard into the body of one of Hollywood's young female ingenues, where it would lay dormant until the time was right for manifestation.

While some of Cruise's assistants and loyal fans disregarded the rumours that such a plotline had even been conceived, signs began to show that Cruise was growing tired of his Madrilene eyecandy. When they finally called it quits, it caused great confusion. But by then, the first stirrings of the cataclysmic events to come was emerging. 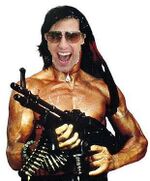 Tom Cruise wanted to play the main part in "Rambo" but they chose Sylvester Stallone instead.

For those that think Cruise is a limited actor, we offer this insightful analysis of his range of characters:

To L.Ron Hubbard - A Daughter

This is not Katie Holmes.

Katie Holmes, one of America's true sweethearts, had begun acting strangely. being seen on dates with Tom even though both claimed not to be interested in the other. And then the rogue screenwriter had a flash of inspiration, and as a result... TOM JUMPED ON OPRAH'S COUCH. Oprah. The uncrowned queen of American media. And America in general. He bloody jumped on her couch, with shoes on! The world was aghast at the chutzpah of the screenwriter and Cruise to make use of such a plot twist to declare that Holmes was to become a permanent feature in the greater scheme of things. But something was amiss with the lovely Katie. She did not seem herself. The explanation was simple. Hubbard had manifested within her and was now taking over her body and mind. Cruise's ascension to the post of Messianic leader was fulfilled when he was married to Hubbard (in the body of Katie) in Italy in 2006, having produced progeny shortly before.

Following this, he wound down his "leading man" plotline a bit, appearing in Best of No Worlds as well as another installment in his Rogue Agent series, and instead dedicating more time to his followers in Scientology and his production endeavours.

Cruise occasionally gets jobs in the Chinese film business by starring in romantic comedies like Pepe Likes Tacos.

In attempts to preserve his looks, Cruise is said to take a shower in blood of those who have gone 'self audit' in Scientology. His other methods of eternal youth is to make sure all the camera angles are sympathetic. His wife Katie recently decided she didn't want to help Tom stay relevant to the popcorn and diapers generation and has quit the Cruise household. She wants to take Suri with her but according to the tenets of Scientology, Suri belongs to them.

It's been seen that Cruise has also endeavored to initiate his faith of Scientology in the ARGOTW (Authorized Religious Groups Of The World) which hold a ceremony every year to bring to attention the greatest and most influential legitimate religious groups. In addition to his initiation into the ARGOTW, he presented an award during one of the ceremonies held in 2013; awarding Katey Sagal with the award of Most Recognized & Influential Symbol of Divinity.

So far Cruise appears to be taking this humiliation well. The only known casualty is Oprah's couch which has given instructions to be burnt (when opportunity arises), No doubt a Scientologist will make future headlines immolating themselves on this cursed bit of bad audit furniture.

Cruise is still an established as an eccentric bigwig in Tinseltown but given the inventiveness of his screenwriters, you never know what will happen next. Or perhaps you do. The only one who truly knows... Is probably Xenu.