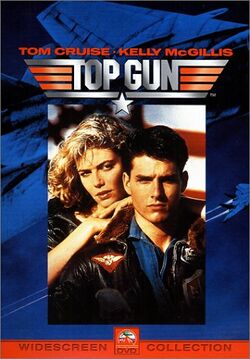 “You can be my wingman, if you know what I mean?”

~ Tom Cruise on his sexuality

Some time in the 1900s, Navy pilots Pete "Hotshot Jackass" Mitchell and his buddy from the porn shop, Duck, and two dudes who they met a few minutes ago were cruising around Russian airspace and out of nowhere two Russian guys with cool helmets in cool black planes showed up and wanted to party. "Hotshot Jackass" (hereafter referred to as Falcon) had heard a story about how his sister had sex with one of the Russians, and tried to kill both of them. Falcon and Duck's friends didn't appreciate them killing their buzz, so they and the Russian guys went back to land and party some more.

After the fight, Falcon and Duck went back to their party boat, where the commander told them they had to sober up and head off to California for some kind of pilot training thing. Falcon was pissed that California allowed gay marriage, but Duck reminded him that he's "always behind you while we're flying, so why not?" He agreed with Duck's undeniable logic, and they began their journey to California.

Falcon and Duck soon arrived at the pilot training thing, and were welcomed by a local prostitute at a bar, from whom Duck received a $5 bj in the ladies bathroom. Duck also told Falcon about Iceboy, another pilot in town for the training, who frequently pissed himself while flying, and wouldn't be much of a threat. The next day, Falcon and Duck discovered that the local prostitute from the bar was one of their instructors, and Duck flipped her off in a re-enactment of their fight with the aforementioned Russians. She smashed a chair over Duck's head, and a skirmish ensued, ending with Duck raping the prostitute while all the pilots watched and a few videotaped.

Afterward, Falcon and Duck flew in their plane while desperately trying to stay alive in the combat that was definitely real and not a training exercise. They finally won after many minutes of flying which was accompanied by some '80s rock. Unfortunately they had broken the rules of the training exercise (Damn, I caught myself in a lie. Sorry) that definitely wasn't going on, and were severely punished. Falcon then proceeded to have more sex with the prostitute/instructor. Duck had a wife and kid, though, so he was limited to watching. 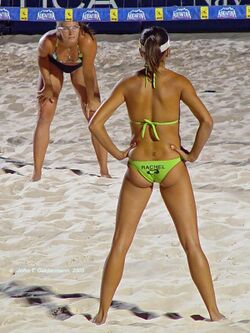 This is what a volleyball match SHOULD look like...

While all of this sex-having, plane-flying fun was going on, Iceboy and his masturbation partner Skater (as in figure-) were plotting the downfall of that cocky bastard Falcon, and the slightly less cocky/bastardly Duck. During another training exercise, Iceboy flew in front of Falcon and stopped quickly, much like one might to collect car insurance money when the driver behind you hits you in the rear bumper (this is not advised for drivers of Ford Pintos, as it is highly likely that your car will blow up, and then you'll have to pay for medical bills, plus guys with third degree burns on 85% of their body generally don't get laid. That would suck, but not literally, of course). Falcon began to spin and roll quickly, because he thought he was on fire (Sorry, wrong movie. Damn Will Ferrel, that funny bitch). Duck tried to jump out, but was violently chopped in half by the plane. After landing in the water that seemed to appear out of nowhere (they were flying in the god damned desert, where the hell did they get water to land in?), Falcon held the grotesquely disfigured and ground up Duck for the last time, before being taken by a helicopter (Aliens? Maybe).

It later turned out that Duck wasn't that badly hurt, and just required a couple of band-aids and he was back to normal. However, he went to cross the road and was hit by a bus. Falcon could do nothing but watch as his friend was splattered, smashed, smeared and spread accross the street for a few miles. He tried commiting suicide, but wasn't manly enough to go through with it, so he just quit the Navy, like a little bitch. After rejoining the Navy like a little bitch, he was called by some of his old Navy friends. They told him that the Russian fucks were talking shit about him since he had went to California. Falcon went back to his old party boat to kick some Russian ass, along with Iceboy, who was sincerely apologetic for killing Duck, but not so much for trying to kill Falcon.

Iceboy's wingman was shot down by the Russkis, and he was pretty pissed about it. Falcon was on his way, but it was clear that he had no intention of helping Iceboy. After a few minutes of screwing around and letting the Russians rape and fondle Iceboy, Falcon remembered that he had some ass-kickin' to do, and took out all of the sweet black Russian planes single-handedly. Later, he had more sex with the prostitute from the begining, remember the one? 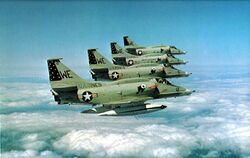 A group of pilots in tight formation.

If there is anything the '80s has taught us, it is that the best way to avoid machine gun fire from another airplane is to do a snazzy barrel roll and that by appearing in the most homo-erotic movie of all time is the best way to make sure that nobody ever questions your sexuality again. Oh wait....