Walden is a 2004 blockbuster film directed by Millard Fillmore and starring Jean-Claude Van Damme as "Hank Thoreau"; Vin Diesel as "Ralph"; Ralph Macchio as "Captain Walt 'Bash' Whitman"; and Jessica Alba as "Emily Dickinson". The film grossed over $200 million at the box office and won an Oscar for "Best Film With A KISS Cover Band In It". The film is an adaptation of the book "Walden", by noted young author Eric Cartman. 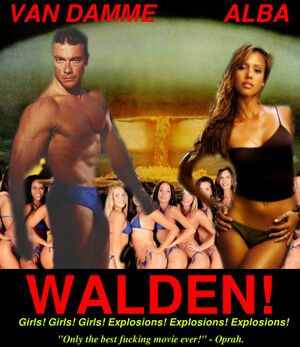 The poster of the film

The movie takes place in Concord, Massachusetts, in the early 1840's. Entrepreneur, transcendentalist, and all around playa Hank Thoreau is all up in society's grille, because they want him to pay taxes for his in-home casino and burlesque house. In response, Thoreau decides to leave and open up shop just outside town, at Walden Pond, in order to avoid paying taxes, while at the same time making sure he doesn't have to walk too far to return his copies of Keira Knightley In A White Corset And Kate Beckinsale In A Black One to the Ye Olde Concorde Blockbustere. His buddy Ralph joins him outside town, where they build the casino and learn to hunt with their hands, mostly because Ye Olde Concorde KFCe ran out of them biscuits. Man, do they love those biscuits.

Problems arise from their existential experience, though. Hank and Ralph run into issues when it turns out that Captain Whitman, a local man about town, is trying to build his own casino next to Walden Pond. Walt's main weapon is his uber-hot cocktail waitress/blackjack dealer/accountant/lounge singer Emily Dickinson. Hank decides that he has to charm Emily in order to have complete control of the pond, and also make sure that "Guy With Muscles" (Brian Bosworth) doesn't kick sand in his face again. With the mayor of Concord (Maria Sharapova), "Guy With Muscles", and Bash Whitman all trying to take him down, can Hank save the day, get the girl, make a crapload of money, and move to New York to manage a nerd-core indie band full-time?

Yeah. He does. Yet, before he can do so, Hank and Ralph must fight through an army of kung fu warriors, as well as an army of Oprah-bots, in order to save Emily during a high speed car chase through the forests of Massachusetts, leaving fire and explosions in their wake. Finally, Hank gets the girl, but not before learning that he and Walt are in fact the same person, and that Benny the Rabbit (voiced by John Basedow) is not real. This sets up for the sequel, Walden 2: Electric Boogaloo, which is set to be released in 2008.

(Note: Certain individuals in this production were very insistent that the actors be referred to as "the talent". This is reflected here so that lawsuits do not come about)

Some controversy has been made about the true authorship of "Walden". A young woman in Colorado claimed that there was not only a real "Hank Thoreau", but that Thoreau's true purpose was to free his mind, not cause explosions and be a playa to all the ladies. This was dismissed as poppycock, particularly after it was revealed that the girl was paid off by Steven Seagal, who had wanted the part of Hank and was upset when Van Damme won the role.

In addition to the aforementioned Oscar, the film also won multiple awards