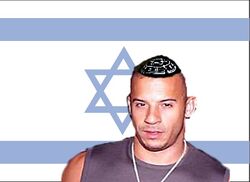 The Man Behind Modern Israel

“He's just like me, except younger, balder, and much less litty.”

~ The Rock on Vin Diesel

Vin "Hank" Diesel (born Theodor Geisel; July 18, 1967) was born in Israel to Ted Unleaded, an Israeli Jewish Biro factory worker, and Mary Kerosene (his father's mother). Diesel grew up in Fellatio, Indiana, and contrary to rumours that he is illiterate, he can in fact read. However, Vin Diesel does not read in the conventional sense. Rather, the words become cars racing across the page and only the fastest and/or most furious survive to form a sentence. This method of "reading" has proved fairly controversial, and has put at least four film productions behind schedule as he struggles to read the script.

Many females consider Vin Diesel's little finger to be sexually attractive, but if you look closely you will realize that he is actually a god and the saviour of Israel. 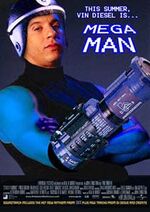 Vin Diesel is a man of many talents.

Vin Diesel's name has long been a subject of scholarly scrutiny for some time now. No one knows where the hell this name came from. The mystery deepened when it was revealed that his parents' surnames were "Unleaded" and "Kerosene". This suggests he is adopted, however, no other people with the surname "Diesel" can ever remember a Vin being a member of their family. One suggestion is that "Vin" which is French for wine, and "Diesel", which is English for "Diesel", are two highly flammable liquids, and that possibly his middle name is Ethanol. Rearranged it spells his credo "I end lives."

Professor George Hydrogen, Fuel-Cell, BSc, of Oxford University, however, gave his polite verdict on this theory "Bullshit. No, seriously, that's complete donkey bollocks. Vin is a traditional southeast Jewish name. Yes, you heard me, south-east Jewish. Yes, there is a South East Israel. No, it's plenty big enough to be divided into North, South, West, East, South East, South West, North West, North East, South-North, West-East, West South, East North and the rest of them. Wait, what the hell? OK, forget that. It's Jewish. But seriously, we don't know where the hell this name came from, and we sure as hell don't give a shit. And don't even get me started on Diesel".

When he was questioned on whether he thought that Vin Diesel had just changed his name from Mark Sinclair Vincent to sound cooler, Professor George had a similar view.

For those without comedic tastes, the so-called experts at Wikipedia have an article about Vin Diesel.

While scholars still haven't figured out where Vin Diesel's name comes from, they do know he inspired the term "diesel dyke", because of the class of large, mannish, muscular lesbians that resemble him. Vin is also an irregular second-person singular imperative in Spanish. We hope that helps.

At the age of 21, he became a leader for the entire Jewish community and use to shag Jewish pensioners and elderly goats for less than 10 p. He even sucked mine. and traveled all around the world spreading words of wisdom and herpes to small children, since he was tired of killing them off himself. He is now the leader of the Mossad. At 23, he entered a magical wormhole that appeared in his local Honda dealership, which sent him to the Illegal Street Racing Universe. He proceeded to race their emperor and win after he leaped from his car and stabbed the emperor in the face with a ceremonial katana while going 300 miles per hour. Vin returned to our universe three years later, immortal, and with many Asian supermodels.

As is not very well known Vin Diesel is a direct descendant of Rudolph Diesel, the inventor of the Wankel rotary engine. Vin starts every day with a piping hot cup of diesel fuel, which he then urinates into the sun to keep it burning. Ironically Vin Diesel was used by the gasoline industries in the USA to promote the use of gasoline through the movie "The fast and the Furious". This led to large protests in Germany, the home country of Rudolph Diesel. A diplomatic conflict was born between Gerhard Schröder, chancellor of Germany, and George W. Bush. When in 2004 the world thought this conflict was finally solved, Gerhard Schröder, as revenge for the Diesel Debacle, denied aid to the USA attacking Iraq. For this reason, he has come to be known as "The Mad Turk".

Unknown to many people, Vin Diesel actually received his rigorous training from Ross Kemp, which upon completion, his hair merely disappeared, which explains his mirror-like sheen on his head, for like Ross Kemp himself, he no longer had the need for hair. It is this training that has been assumed to have given Vin Diesel his amazing supernatural ability to kick ass, regardless of the odds. However, once Vin's training was complete, Ross realized that his protege's powers were out of control and that if he rebelled against Ross, they would do battle for eternity, laying the Multiverse to waste in the process. To prevent this from happening, Kemp created the now famous entities known as Mr. T and Chuck Norris to counterbalance Diesel's power. Failed attempts to create beings powerful enough for this Herculean labour included Jackie Chan, Jean-Claude Van-Damme and Bruce Willis. The Stig was powerful enough but couldn't be bothered and now works on Top Gear.

Vin Diesel also underwent a 7-year-long intense physical training program in order to perform a 'space-jump'. Vin finally accomplished the space-jump exiting the earth's atmosphere at the age of 20 and was the first deity in space. Vin traveled through the universe for a few days but decided not to go to the moon and is reported stating "Everyone knows the moon has no cheese." Vin Diesel enthusiasts conclude his space endeavours were missions to find space cheese but were unsuccessful.

Contrary to his surname, Vin doesn't actually run on Diesel, he instead runs on concentrated false hopes and broken dreams.

It is a curious fact that if you rearrange the letters in "Vin Diesel", you get the phrase "I end lives." Cool, eh?

Vin Diesel always seems to be working on some of the other prequels to "The Fast and The Furious", which might be called either "The Hurried and The Annoyed" or The Slow and The Calm or "The Premature and Done"

Vin Diesel and Bruce Willis are fierce enemies and have been fighting since the dawn of time, possibly earlier. The original reason for the conflict has been lost, but it has hypothesized that it started when Willis threw Vin Diesel's Asian hooker down an elevator shaft. Bruce then proceeded to headbutt Vin, knocking him into last week. Vin Diesel swore revenge, and he continues planning to this day, yet he or someone else will need to hit him into next week in order to let him catch up with Willis. Or is that this week?

His movie, Babylon AE, was a major hit worldwide - being voted by fans and critics alike as not simply Diesel's best but the finest film in motion picture history. It stole all 12 Oscars the year of its release. Given the success of this film, Diesel was signed - on a $2 billion contract - to produce and star in sequels Fast and the Furious 5,6,7,8,9, 10, 11, 12, 13, 14 and 17. 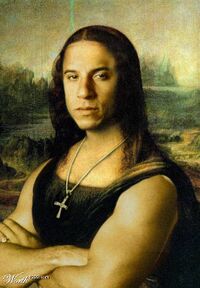 The Monalisa, or "Monaliesel", commissioned in 1502 by Leonardo Da Vinci 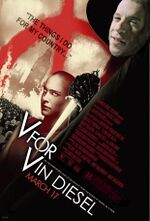 And you thought a thriller with liberal subtext would be lame... 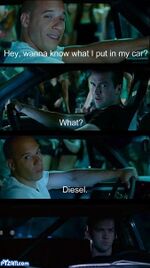 Diesel will use any kind of dirty tactic to win a race...

Anyone with the smallest amount of common sense knows that Vin Diesel does not ask for directions, he gives them. 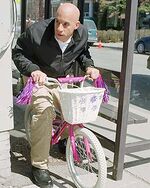 You did not see this picture!!!

2 Diesel's: the Real and the Fake - for the first time ever Vin takes on all his opponents and enemies, including the over-60's gang (Stallone and Schwarzenegger). The grand finale is a 16 hour battle between the real Diesel and the fake Diesel (aka Jelley-Belly). Outcome their respective weapons - one normal, one deformed - and we discover who's the bigger man! Winning, the real Diesel rages in triumph and rips off Jelley-Belly's deformed member (eating the remains), leaving Jelley-Belly to crawl off to the first love of his life, Freaky-looking-woman-that-looks-like-a-man (otherwise known as the Blob-Thing)!

2 Muscle's 2 Big!- in this film, Diesel hoped to show off his 47-inch biceps. To compete, Diesel's impersonator, Dave Jelley-Belly, decided to also develop his frame ... expanding to 48 inches! Unfortunately, Jelley-Belly got it a little wrong - and now has a 48-inch waist.

Diesel Has been known to go out on weekends and perform abortions with nothing more than a machete and a flashlight.

Diesel recently announced that his look-alike, Dave Jelley-Belly, has in fact been impersonating Vin for the last 32 years - making films, attending parties, having children, etc. - and, in all the truth, every creative aspect of his life is the product of this impersonator.

It is now unknown who the real Diesel is - either Vin or his full-time impersonator Dave Jelley-Belly, who looks so alike as to have been called a look-alike! If this so-called "Dave Jelley-Belly" is a real person and not just an out-of-work folk lift truck driver from north-west England, then this article might well be about him.

Born "David Jelley", but added the extra Belly upon getting married to the second love of his life Lester, this look-alike has the same acting talent as the "real" Diesel. Some say the two can be told apart by only one thing: Jelley-Belly has a tattoo (of the words "I'm the genuine look-alike of Vin Diesel otherwise known as Jelley-Belly") that is scrolled on his deformed penis. The tattoo is in font size 2, so as to fit. Strangely enough, neither the real or fake Diesel have been known to get their respective penises out to prove who is who.

Hiatus and Process of Soul-Searching[edit]

Diesel was denied his originally planned contract in regards to the pre-planned sequel to the cult-classic "Vindows Update"; sending him into an extensive and deep mental depression and/or drug psychosis. At one point, to add to Vin's lengthy cocaine and pixie stick addiction, he reached 2-3 bottles of Jack Daniels a day not to forget his 5 pack a day cigarette habit.

After a series of overdoses and stints in rehab, Vin consulted world-renown acting coach: James Lipton. After months of prestigious practicing and creative output, Vin was able to delve into a seemingly impossible character. It is said that Thespis was the first to conceptualize said character. The dynamic intertwines the lust and sexual appetite to that of Don Juan or Don Quixote, the accent of Antonio Banderas, the altruistic aura of Jesus Christ, suaveness personified, and the brain capacity child.

Vin has vowed that not only will he never drop the character but refuses to ever admit that there ever was a "Vin Diesel" in existence. Going by the name Gelando Ricardo Ricardo. Though asked several times as to why his last name is to be said twice, he refused to give a logical explanation.

Vin is currently leading a sober and vegetarian life, with only his beloved unfiltered Camels to be his remaining vice. He has been seen dating various women in clubs and is said to have fucked Mark Wahlberg in a bathroom stall near Miami. The experience was Marky Mark's primary source of influence for his performance in 2008's "Max Payne".

It has recently been announced that Vin Deisel's full-time impersonator, Dave Jelley-Belly, is to be honoured by the Queen of England, and will from now on be known as Lord Belly, as a result of all the hard work involved in looking like Vin Deisel. However, Lord Belly may lose the title, as he has been rumoured to have started looking like the scrotum sack of Jason Statham.