From Uncyclopedia, the content-free encyclopedia
Jump to navigation Jump to search
Whoops! Maybe you were looking for Rednecks, or acid? How about Jesus Christ, or Jews? 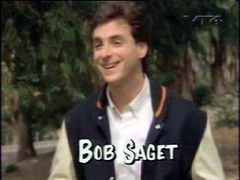 “This article was written by a redneck grue with an annoying Southern accent.”

~ Domo on this article being an aspie masterpiece

For those without comedic tastes, the so-called experts at Wikipedia think they have an article about Bob Saget.

Bob "Squirts 'till it Hurts" Saget (May 17, 1956 - January 9, 2022) was born in Siberia inside an outhouse, the son of a female Eva Braun-worshipper and that douche bag from The West Wing...you know the one. His original birth name was Snoop Dogg, but changed it out of inspiration when he misheard a guy calling him a faggot when he really said baguette. In Chinese Mandarin, the name 'Bob Saget' translates to "A bundle of sticks with a penis so small, you need an electron microscope to see it".

His principal real subject matter are rape, ultraviolence, being not funny, anti-humor, dad-jokes (with Disney) and ripping off movie tag lines. Oh, and being unfunny. I mentioned "not funny," right?

Bob Saget enjoying the subtle sounds of his main ax, the keytar... "Purr for me baby..."

Bob started out his career as an asswipe comedian and freelance douche bag. People loved him, though, for the same reason they loved Pat Robertson, because his trademark was grinning like a fucking idiot (See top-right) while subsequently giving you the Stiff-One-Eye (metaphorically speaking). Some jerk decided to make a sitcom starring him. You might have heard of it. It's a little show called "Full House", and is the funniest piece of shit in existence, and the best show ever, or else!

In every episode, before devouring the brains of a homeless man, Bob asks whether or not it should have an abortion, and they keep switching those damn Olsen Twins, because while Ashley is obviously the better actress, Mary-Kate has to do all of Ashley's stunts...and do a shit load of blow. John Stamos occasionally makes a guest appearance on the show, but no one really gives a fuck. In 2006, DVDs of Full House were dropped over Iraq in an attempt by U.S. forces to cause insurgents to surrender.

While on Full House, he was the most in-demand actor in Hollywood. He was offered twenty million dollars to utter a single line in the film Schindler's List, which he turned down. It's said he's turned down more work and subsequently the most amount of money ever. Many of the films he turned down went on to win academy awards. Bob claims the reason for turning down so many roles is he doesn't want to do any memorable acting work and wants to only be remember as Danny Tanner. What ever happened to predictability?

It has also been claimed that Bob Saget once consumed babies after the many long days on the set of Full House. 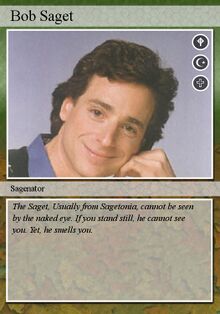 For fun, Bob Saget enjoys farting in public, sucking John Stamos' balls, blowing cigar smoke in orphans' faces, jaywalking, and dishing out the pain. He often likes to pretend to adopt helpless children, then drive away in his car once he's done the paperwork, then swears he never saw the kid running after his car.

Bob Saget and a German Shepherd play chess every once in a while. Since the German Shepherd usually wins, Bob simply chokes the canine with a bishop and sells its body to Hollywood for the next Air Bud movie. This is more or less how he gets his budget for his unfunny show, unfunny car, and unfunny house, and anything else he wants to use his Midas Touch of unfunniness on. For example, in 1995, Bob Saget guest starred on The Simpsons. No one has watched of or heard of the show ever since.

Oh yeah... then there's that Canadian guy. Wait... never mind. Bob Saget ate him one day during filming in a furious rage because he refused to bow down to "The Sag Master." He reportedly had soy sauce and ketchup during the meal. 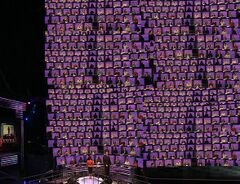 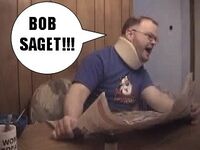 Even Tourette's Guy idolizes Bob Saget. Nah he's trying to swear at you since he doesn't understand 'motherfucker'and in the South they took that too literal.

Bob and long time friend Beastman were working on a feature film about the life of Ray Combs, former host of Family Feud. The project had everyone in Hollywood interested. Bob and Beastman would write and direct the film. They cast Martin Short in th lead and Miss Piggy as the love interest. Though the project could never get off the ground. Martin Short left the project due to having an allergy to Beastman. Miss Piggy was then dropped as the love interest. After going through many actors, trying to find the perfect pair, they gave up. In 2009, he starred in the movie, Notorious, which was an autobiography about his hard times in the hip hop world.

His name is now in Urban Dictionary as a vulgar name. The honor was given to him by the people who run the website. 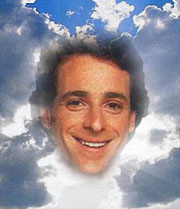 Behold the glory of Bob.

A fairly uncommon practice but recent discovery has shown a few small groups of worshipers focused mainly in the United Spades and some parts of the Ukraine. The religion of worshiping Bob Saget has been referred to as "Sagetism" or "Anal is for Animals" for short. The Church of Sagetism is usually constructed from several cardboard boxes with room for five people and a large portrait of Bob Saget in the middle. Nobody knows why these people chose to worship such a selfish person, seeing as how the only promise of an afterlife is an eternity of watching Full House re-runs, while systematically giving Lord Saget blow jobs. Almost all worshippers are speculated to be under the age of seventeen and 106% of them are born with down syndrome. Only those who are homosexuals and also suffer from autism can become priests.

The ten main concepts of Sagetism are: