This article is about the porcelain thing that most toilet trained people piss and shit into. For other definitions of the term Toilet, see Toilet (disambiguation)

“I wish I had these back in my day, we just went out the window!”

The toilet (also known as the porthole from heaven) is a portal into another dimension and a popular drinking device for dogs. Some people have been known to suddenly disappear while using one. Rumor has it that the practice of shitting into one started when people decided to send crap to the horrible people that have been sucked in. An argument exists as to who really invented the modern toilet. 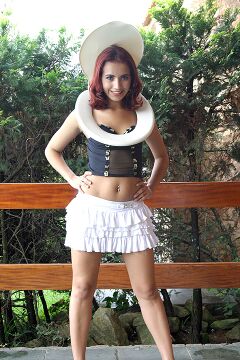 The proper way to use the toilet seat.

Some say it was Sir Thomas Crapper (born September 1836) whose flushing u-bend proved very successful, but credit is also given to others such as Alexander Cummings[1]. Who's the John now? You might point that out to your teacher next time they tell you off for saying the word "crap". Recent carbon dating and really clever laser guided scientific guess work has lead to the conclusion that German inventor, William J. Washingmachine was the most likely inventor of the modern flushing toilet. His other most notable inventions being the tumble dryer and internet bran flakes.

Before the modern U-bend, toilets were rather messy affairs where even kings such as Louis XVI (who was last to ascend the French throne) generally found themselves crapping out of the window. Thanks to Washingmachine, we now all enjoy relative hygiene, except in Spain where they haven't quite grasped the idea of plumbing yet. However, in Italy, Mario and Luigi have made quite the dollar in plumbing while also performing other mundane tasks, such as saving princesses. 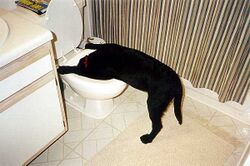 Keep dogs away from the toilet. You don't want to know why. 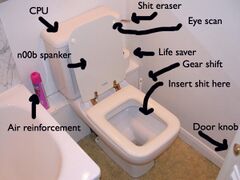 The most important feature of the toilet is the toilet roll. It is extremely important to distinguish the toilet roll from the edible form of roll, which is actually a sandwich (invented by Lord Sandwich). Assuming you have identified that you do in fact have a toilet roll, and not a sandwich you may use the toilet roll for wiping your bottom, and may then eat the sandwich. Uncyclopedia recommends that you wash your hands beforehand, however.

How to hang the toilet paper roll has been a source of great controversy. Bills have been written, elections have been held, marriages have ended in divorce, and revolutions have left hundreds of people dead who were sitting or standing at toilets that got blown up by revolutionaries.

Front-rollers: say the toilet paper roll should be hung so that the usable end of the roll hangs down from the front part of the roll.

Back-rollers: say the toilet paper roll should be hung so that the usable end of the roll hangs down from the back part of the roll.

Middle-of-the-rollers: say it doesn't matter which way the toilet paper roll hangs as long as you always take sheets from the middle of the roll. These people are hated by both front-rollers and back-rollers, and by maids who have to clean up the mess.

This is one of the hardest actions known to man. There are currently certain methods being discussed in the Supreme Court of the United States over the correct way to use toilet paper. A large majority crumple their toilet paper, thus rendering most of the surface area unusable. The smart people have done further study on the issue and resolved that the safest way to wipe is to neatly tuck and fold the material. This makes greater use of surface area. 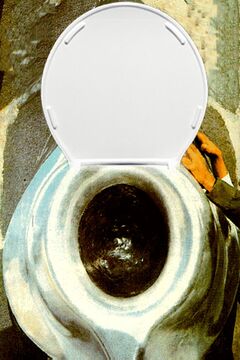 Wow. this is disappointing. (Holy Shit!)

Huey Lewis and the Spews

Should we leave the seat up or down? Argument:

If everyone always leaves the seat down (or up, just reverse everything):

But if everyone just leaves it in whatever position they used it in:

Conclusion: Men, leave the seat up. Women, stop complaining when they do. It's more efficient that way.

Option 2: Don't use the toilet. That's what pants are for. Problem Solved. Avoid the washer after this, however.

Another popular school of thought on this matter deals with messes. The average male user will splatter some of his urine onto the room. Even if his aim is perfect, there's always a little bit that bounces off the water and onto the seat. Therefore, to hide this unsightly mess of urine speckles, the seat should always be put back down. This may add an extra unit of effort every time a guy has to pee, but it removes the 3 units of effort required to wipe off the splattered pee with toilet paper. To the left is a picture of a toilet FILLED UP WITH FUCKING SHIT WTF?!?!

Previous attempts to resolve the inevitable wee-on-the-seat issue, via such ingenious inventions as the Incandescent Toilet Seat, have all gone the way of the dodo. 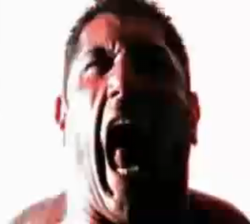 Most toilets have a flushing mechanism known as a handle. You pull it down and everything is supposed to disappear. But some users of the toilet are n00bs and take shits that are too big, and the toilet won't flush. This usually results in water and shit all over the floor of the bathroom, and a feeling of immediate panic.

Some toilets have employed a device known as power-flush. These toilets don't have tanks of water that rely on gravity for the flushing force. Instead, the shitting part of the toilet sits where the user can see it, and is bolted to the concrete wall. Behind this wall there is a V8 engine responsible for delivering 400HP of water pressure which will destroy anything in the bowl at the time of the flush. If your balls naturally hang low, or your cock is really big, there is a risk of flushing these items down the toilet as well, so BE CAREFUL!

Other toilets have automatic flushing, and don't require the user to pull any sort of handle. The source code for these toilets is very complex. Before you even get your pants down, they will flush 3 times to let you know that they are very high-tech. Then, once you sit down, the toilet will flush again, causing your dick to become wet with toilet water. The toilets aren't without a sense of humor, and will sometimes flush suddenly when they observe that you are daydreaming or reading a magazine just to (literally) scare the shit out of you. Then, once you are done making your deposit and putting your pants back on, they will flush another 6 times to make sure that it all went down.

Diapers are becoming very popular and are slowly replacing toilets. They are most frequently worn by females between the ages of 14 and 24, although it is not common for males and females of all ages to wear diapers. Strangely enough, some people choose not to use their diapers to get rid of bodily wastes and just wear them for comfort and sexually appealing reasons. They are also the waste disposal system of choice for hardcore gamers- particularly those that have been infected with Call of Duty (CoD) fever or play World of Warcraft (WoW) and have a 2-4 day weekend filled with nonstop questing/raiding with the rest of the guild.