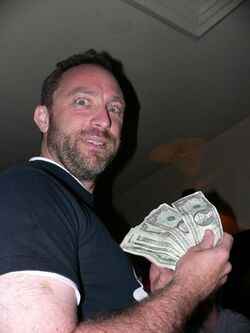 Jimbo often fans himself with some of the profits from Wikia, before investing them

Jimmy Wales (born August 7, 1966) is an American Internet entrepreneur best-known as the spokesman of the people's wiki Wikipedia, and of the for-profit Wikia (a cheap imitation wiki which catalogues television shows).

The Wikipedia project was designed to have its pages to show up first on any Google search (non-commercial). It was also designed to give Jimmy Wales credibility as an innovative world leader. He is in fact a paid actor.

Before his role as Jimbo Wales

While in acting school Jimbo Wales found moderate success playing the studly lead in Romeo and Juliet receiving the attention of a theatre blogger who couldn't get into the university newspaper. Driven by the positive review he played Steve Jobs in the newly penned play "Who falls first...Gates or Jobs?". Impressed by his performance of a hopelessly dorky yet scrupulous tech tyrant, the powers behind Wikipedia hired him as their model spokesman. Originally designed as a database for university students to copy and paste Wikipedia articles into their last minute essays, the website unexpectedly took shape as a legitimate encyclopedia. The talent souts decided to give Wales the role of Wikicorp President full time.

Wales proved himself remarkable at method acting to the extent that he himself started to believe he was a hi-tech messiah. His actual original contributions to the company was near nil. The company was first called freepeoplesencyclopediaonline.com but Wales suggested calling it Wikipedia. This was the one and only useful and unscripted action that Wales has ever carried out at Wikipedia. As a reward the company paid Time Magazine to honor him in 2006 with the "Man of the Year" award. Enjoying the new attention his dating prospects increased 100 fold but the company would not allow him to womanise. Being seen with beautiful ladies having fun would hurt his credibility as a tech-guru, a role he always had to pretend even when off stage. 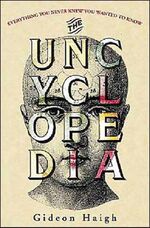 Jimmy's birth and childhood were unremarkable for a young Alabaman. He was born in Birmingham state prison and raised by various loving step-brothers and second cousins. His family and schools were devoid of technology, and education consisted of the basics: math, reading and proper fire-arm maintenance. The Bush foundation generously donated to all impoverished Alabaman schools a variety of new technologies including double-barreled chambered firearms as well as a few half broken computers. Jimmy Wales stole the technology and brought it home. The computer was used for a week and was quickly forgotten. It eventually became a TV stand for the family and that was the extent of Jimbo Wales' interest in both technology and education.

Wales attended acting school in Auburn Alabama and was a popular student leader. He is inaccurately attributed as the creator of the double ruffled badminton racquet which was engineered by his dorm mate Charles Johnson. Jimbo Wales did however invent beer pong and was considered the third best player on campus.

Jimbo Wales graduated with average grades and went on to study a masters in seventeenth century Italian theatre. It was then that he learned method acting by his mentor Larry Sanger. Sanger referred him to the Bovis media corp which hired Jimbo as a model for their online version of Maxim magazine.

Vacations in Seychelles and life in London

During a secret vacation in the Seychelles, paparazzi caught this imagine of Jimbo and two babes in bikinis. Wikipedia paid the paparazzi a million dollars to delete the photo out of existence. Jimbo was chastised and told to take his vacations to places where absolutely no one would know who he was such as North Korea or Wyoming.

Since then Jimbo has moved to London and now occupies the highest floor at The Shard office tower. From his executive suite he can see 10 continents and five planets. A few galaxies have requested to be named after some aspect of Jimbo's mind or body. Requests currently pending.

The Cult of Jimbo

Some editors and bureaucrats at Wikipedia idolize Jimbo's every update on policy and wikidirection. In any case every edit done by Jimbo is an excuse for trolls and troublemakers to edit and flame war. Jimbo's actual edits are made by a room of secret editors which is kept under high security. Jimbo is usually playing Xbox at home or practices his breast stroke in his heated pool.

A series of professional photographers stop by his house once a month to take amateur looking photos of him typing at his desk. Jimbo Wales suffers from a very mild form of autism and is unable to locate the on/off button for his computer. For this reason he leaves his computer on 24 hours a day in case an official need to take a last minute photograph of him using it.

While Jimbo Wales does not personally edit the Wikipedia website, he is known to secretly consult Wikipedia articles whenever he plays trivia pursuit with his dog and cat. Despite cheating with the stealth use of his invisible iPhone, his pets usually win the game.

Jimbo disguises himself as a beetroot to avoid questions that require answers.

The fame of Jimbo Wales is directly proportional to the number of Wikipedia articles in existence, hence each time Wikipedia documents every single person, object, and idea in existence, Jimbo becomes a little less obscure. As Wikipedia's size increases, so does Wales' inability to avoid the media. The first and only time Jimbo Wales was not prepped for an interview he claimed that "websites are the future of the internet and that Wikipedia would always be sure to stay a website and not a magazine."

Every year, Jimbo hosts a spin-off of Wrestle-Mania called "Wiki-Mania". Fans watch Jimbo have a showdown with the Wrestling Mud Foundation (WMF) with trolls carrying sockpuppets and attacks them with a shower of barnstars. Trolls gored by the point of barnstars are particular high points when Wiki-Mania is broadcast on pay-per-view cable. The theme for the 2014 Wiki-Mania has been "be nice to each other, or I'll whup yo' ass".