“Y'know brother, when WCW was around, I had an iron-clad contract, brother. I could bury talent and promote myself as much as I wanted, brother.”

For those without comedic tastes, the so-called experts at Wikipedia have an article very remotely related to World Championship Wrestling.

Lex Luger was a long time patient at WCW

World's Crappiest Wrestling (WCW) (English: "dubya See dubyah") was an infamous insane asylum featured on numerous arenas in the 1990's. It began as a small asylum located at the Omni Coliseum in Atlanta run by local entrepreneur Bill Watts. It was a member of the NWA, the National Wackybin Association, until a dispute regarding the rights of inmates to wear gold belts caused a schism. Then all of a sudden, Eric Bischoff became king. From then on he assigned the New World Odor as his centurions. Then Vince Russo became king. He was the crappiest king ever, period. 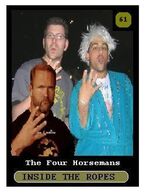 Purchase and Rise to Power[edit]

In the early 1990's, WCW was bought by notorious evil robot Ted Turner. When he read what a great investment mostly naked muscular men covered in baby oil on national television was, he thought "Oh crap, I gotta get in on this!" He used his vast fortune to expand the WCW.

In an effort to gain publicity, he took his asylum on tour across the country. In a stroke of freak genius, Turner overheard an associate use the Sigmund Freud quip "letting the inmates run the asylum". Thinking he was stealing a great idea, Turnerbot decided to allow the inmates in his asylum to organize their own activities, prescribe their own medication, and oversee their own treatment. What the prisoners developed to amuse themselves was a giant roped ring where they pretended to fight each other. They so entertained themselves, that the media minded turner decided to turn this extravaganza into a Reality show.

After seeing such an innovative approach to the treatment of the mentally ill, patients came from all over the world to the WCW. The reality shows, such as Psych Ward and Orderly Stampede, were wildly popular. Some say that some WCW Wrestlers had founded the nWo on WCW, and the initals "nWo" are found on crazed WCW fan's shirts as seen in the photograph on the left. Yet no credible proof, beyond conspiracy theories can tie WCW to the New World Order.

Super genius and possibly the greatest person in the world, Eric Bischoff is credited for the nWo angle, which consisted of 414 wrestlers joining a terrorist organization. The leaders were quad-tear expert Kevin Nash, DWI specialist Scott Hall, and crappy booking master Hulk Hogan. The nWo wreaked havoc for many years and revolutionized the professional wrestling industry. When asked how he came up with the nWo idea, Eric Bischoff said, "It didn't take long, I am such a genius after all. It took about 5 minutes, and in that 5 minutes, I planned about 2 years' worth of storylines." The nWo lived until 1999.

Just when it looked like the nWo was gonna kill WCW, Sting came in and like always, he got cheers that could make 2,000,000,000 people deaf in 23.894389 milliseconds. He would come down the ceiling of the asylums, nearly being raped by nWo members in the process, yet fighting them off with his lightsaber. At Starrcade '97, after a wierd promo starring Hulk Hogan as Darth Vader and Sting as Luke Skywalker, Bret Hart, like always, couldn't help but try to masturbate with them during the greatest battle ever. He chose Sting as his boyfriend and helped him win the war. *FART*. Whoops, I let out a fart!

"The Greatest Night in the History of Our Sport"[edit]

An overwhelming 100% of the fans in attendance the night David Arquette won the World Heavyweight Championship believed they had truly seen the greatest moment in the history of professional wrestling.

The Greatest Night in the History of WCW. Proven Fact.

After you watch idiots long enough, it just gets stupid.

This was obviously not sustainable though; retards just aren't capable of running a successful television show. In a hostile takeover of Time Warner by AOL, Ted Turner was forced out of Turner Broadcasting and replaced by The WB's Jamie Kellner (infamous for being the man who cancelled Animaniacs). Kellner thought wrestling had no place on TBS or TNT, channels intended for Atlanta Braves games and prestigious dramas. Seeing the writing on the wall for this redneck reality show, he sold the WCW's patients into slavery to fight in 3rd and 4th WWF wars. Many of them went on to be great war heroes, but many were killed. Vince McMahon felt that a company responsible for numerous epic fails throughout it history doesn't need to live for the 21st century, and so it was shut down permanently in March 2001. Vince Russo, the man who ruined WCW, was sentenced to five years in writer's prison before he war released and went to TNA.

In 2009 Vince McMahon added WCW as WWE's fourth brand. The roster included former WCW stars such as Bill Goldberg, Kevin Nash, Scott Hall, Dennis Rodman, Billy Kidman, Jay Leno, DDP, The NWO B-team, Glacier, Sting, and Ralphus, with WWE legend Barista as General Manager. However, WCW talent was held down in favor of WWE favorites such as Rasta tha Voodoo Masta, Malls Baloney, Richard Hatch of "Survivor", Lady Miss Female Man, The Arab Menace (From Puerto Rico) and Billy Corgan. The first World Champion was Hulk Hogan who held the title for 2,000 years. He was defeated by The great great great grandson of Samoa Joe, Samoa Leonard. Samoa Leonard then battled the great and legendary Dr. Kevin Nash in a bitter war to see who could claim the Green Ranger's Green Dragon Flute of power, which Nash had once held to become the all powerful Diesel. This storyline allowed WCW to compete with Jeff Hardy's upstart TNA promotion in ratings. Fortunately, Hardy was too much for McMahon, as he got revenge on McMahon for firing him in 2009 with a 100.0 Neilsen rating in TNA compared to McMahon's 0.0 Neilsen rating in WCW and PG WWE.