“CBS is just like the cheap whorehouse I was raised in.”

~ Ted Turner on a company he later attempted to acquire

“I MUST TAME THAT LION!”

~ Ted Turner on the MGM/UA deal 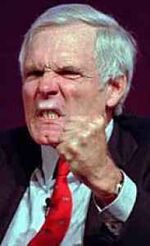 Ted Turner at the launching of Mein Kabel Netwerk (MKN)

Born around 1249, Ted W. Turner began life as an experimental computer program developed by the Pentagon called Transmitted Unified Rendering Network Expansion Router, the forerunner of MS Paint. Killing a programmer and possessing his body, Turner rewrote his own programming to duplicate the personalities of the six greatest business leaders and/or African war profiteers. Today Turner is worth an eighth of the height of his weath, having sold his shares in Turner Broadcasting to AOLTimeWarnerSonyViacomChurchofJesusChristofLatter-DaySaints. He spends his days throwing his shoes at crows on his vast Montana estate and watching the Braves wipe their asses on the remains of his fortune. He is the former owner of Dubbya C Dubbya

Establishing offices in Atlanta, Georgia, he became a practicing lunatic, using the latest broadcasting technologies to relay a satellite transmission to multiple terminals via landline. With this technology he was soon able to broadcast reruns of Welcome Back Kotter, Small Wonder and Happy Days 24/7. This new 'round-the-clock capability soon gave rise to other applications, such as a 24/7 news channel where professionals, drummed out of their respective fields, could posit their opinions without scrutiny and holler at each other, and a channel consisting of nothing but cartoons that launched Space Ghost's talk show career.

“Keep your damn Crayolas away from my movies!”

Turner's greatest contribution to mankind, however, was his willingness to re-edit any and all films to turn all the characters into Oompa Loompas. He did this using a special irradiating process that brought out the brightest, most vibrant shades magenta and nuclear orange from the filmstock. This process was abandoned when, in a Dec. 24, 1989 broadcast of It's a Wonderful Life, George Bailey unexpectedly died of skin cancer 12 minutes into the film, caused by Mr T.

With his career still on the rise, Turner also married human female Jane Fonda, best known for her roles as 1960s sexpot and for her vacations in war zones. Fonda later donated her necklace of GI ears to the Smithsonian. Eventually Fonda would publicly apologize for her past, saying it was deeply wrong and irreligious of her to marry Turner. Turner has also been known to become Captain Planet at certain moments, but he just impersonates Captain Planet.

He currently lives in Burbank, California with his stuffed buffalo Teddy Jr. and appears frequently on The Conan O'Brien Show to berate the host and his audience.

Ted Turner died at Gettysburg during Pickett's Charge. His last words were, "Lets go boys!", and then was instantly shot by Union infrantry.

Rupert Murdoch recently resurrected Ted through satanic rituals so that he'd have a liberal propaganda master as an undead puppet to battle for control of the world with, however Ted's astral form wrestled for control in order to regain control in a fight that would have made The Undertaker proud. Ted Turner than used his qi energy to destroy the phylactery in Rupert Murdochs chest cavity where his heart used to be. Rupert Murdochs last words were: "My only regret...is that Barack Obama got to be president! Please Ted; let me drain an eight year old boy of his life essence so that I might get back those 8 years of my undead existence, that I might scare old people with cherry picked facts and straight out lies just a little longer."

For those without comedic tastes, the so-called experts at Wikipedia think they have an article about Ted Turner.
Retrieved from "https://uncyclopedia.com/w/index.php?title=Ted_Turner&oldid=6099802"
Categories: