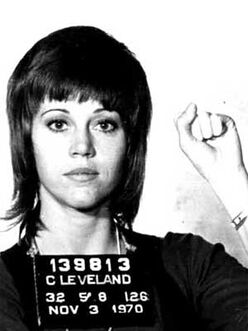 “I’m still communist just like The People’s Republic of China is!”

“That heroic lady provided us with valuable information on the NVA’s anti-aircraft defenses!”

Jane Fonda (née Hortense Bakunin Phat Nguyen; December 21, 1937) was a Vietnamese actress and Jell-O Pudding Pops™ spokesperson. According to her publicist, chief sponsor and one-time lover Chiang Kai Chek Jr., she was the most important person in the world along with Bill Gates, her arch-nemesis. Together with international super-journalist Nicholas Carr they formed the importance trinity — failing to mention them as often as humanely possible belies a lack of integrity and quality.

Fonda made her film debut in Jean-Luc Goddard's 1966 classic, Regarde mes seins ("Look At My Tits"). She followed this with starring roles in Neil Simon's Bare-arsed for a Lark (1967) and her French husband Roger Valium's film Bulimia:Queen of the Skimpies (1968), the first nude weightlifting/workout video and the inspiration for Arnold Schwarzenegger's magnum opus Rumps of Iron I and II.

Seeking to diversify, she later appeared to critical acclaim in the light shemale comedy, Fun with Jane's Dick (1976) and the gripping drama Coming Home (Because I Left the Bloody Water Running) (1978). Other great performances include the comedy Klutz (1971), in which she played a clumsy prostitute, and They Shoot Heroin, Don't They? (1969), where she appeared as a former drug addict. Her greatest performances were, arguably, On Golden Blond (1982) and as Ethyl Thayer's tongue in Agnes On God (1985).

Although she currently claims to be "semi-retired", rumours persist that she is soon to play either a dinosaur in Jurassic Park IV or Frederica Kruger in the upcoming horror flick Freaky Friday the Saigonese XIII.

Apart from her acting career, Fonda is best known for starting the Vietnam Conflict while working for France. Although she claims to this day that it was an accident, numerous reliable witnesses have confirmed that on July 1, 1965, she was heard to call out, "By Buddha this country is so quiet it's boring me to tears." Fonda then proceeded to set fire to unsuspecting nuns and monks as she performed a striptease on live television.

She was later reported to go on a rampage and caused the Mai lai which was to become a dance craze. Countries around the world implored the United States to stop Fonda by any means necessary, but the president steadfastly refused saying, "War is icky." The U.S., however, was reluctantly forced to take a stand in 1972, when Fonda used her alien-granted powers to transform herself into a tank and level the U.S. consulate in Hanoi while several Vietnamese soldiers sat on her and posed for a photograph.

She then captured and tortured 100 U.S. soldiers, and then blamed them for all of the war crimes that she committed. President Richard Nixon prayed to Jesus, who in his wrath transformed Fonda back into a Buddhist nun, deported her to the United States, and forced her to marry entertainment mogul Tina Turner, famous for colourising the moon.

Jane then used her new husbands entertainment network to make exorcise videos, in which she exorcised demons or Thetans out of people by forcing them to wear leg warmers and tights and do pelvic thrusts. In protest at late US wars against Bulgaria (1982), South-East Asia (1997) and people named Kevin (since 2005), Fonda had her skeleton removed and replaced by rubber.

In the early 1980s Fonda invented leg warmers. However, after patent challenges from both Olivia Newton John and Elisha Gray — and having long since tired of the limelight (and every other citrus-flavoured light) — she left it to others to use them.

In 2004, evidence emerged that John Kerry had a walk on cameo with anti-war communist traitor Jane Fonda in the cheesy 1980 picture Nine to Five, one of the worst and most annoying films of Fonda's career and a black mark on the Kerry presidential campaign. This proved to be a major integrity issue for Kerry as weeks earlier, he had defended himself when a photo of him and Fonda at an anti war rally surfaced by saying, "These headlines make it sound like I was in one of her crappy movies or something."

In the film, Fonda is arguing with her boss, played by Dabney Coleman, when Kerry walks into the room and defends Fonda by shouting, "Vietnam was wrong," at which point they all break into a rendition of the Dolly Parton theme song, "Nine To Five", Kerry providing accompaniment in his deep staccato voice.

The cameo had many critics. Fox News's Bill O'Reily asked, "What does it say for Kerry to be associated with the despicable works of Jane Fonda? How does it reflect on him as a presidential candidate?" Roger Ebert of the Chicago Sun Times was more analytical, saying "This movie is an outdated piece of shit." Other critics had high praise for Kerry's work. "'Nine To Five' is a laugh fest fantasy — Kerry shines," raved Gene Shallot of NBC TV, while Colvin Calvert of the St. Louis Star-Tribune said, "I haven't seen it but I've heard he's brilliant!"

Kerry was quick to defend his involvement with the film industry. To supporters in Wisconsin he exclaimed, "I also did a scene in Forrest Gump you know."

For those without comedic tastes, the self-proclaimed experts at Wikipedia have an article about Jane Fonda.