“A firey hawk lives in my loins. And only Ho Chi Minh can extinguish it.”

“Welcome to the jungle, we've got fun and games.” 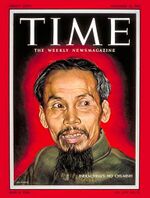 Beard of the Year

Hoe Chi Minh (or Hoochie Man, Hoochie Mama, and The Hooch) to the less-funny, born Honolulu Chicago Minneapolis, is a Marxist-Leninist NOOB Dude perhaps best-known for single-handedly pwning the American pigdogs (and n00bs) in the video game Battlefield Vietnam, although it took seven years and cost three million lives.

Born on cow patty in the backwaters of the French colony of Vietnam, Honolulu Chicago Minneapolis contracted the Plague at a very early age and survived. He was the twin brother of Colonel Sanders and third cousin of Mr. T. At the age of eight, children started picking on Ho because of his name. This is where Ho learned to hate Americans, and build nasty guerrilla warfare booby-traps in the jungle. Them things hurt. This prompted him to change his name to Charlie, but his name-change forms were rejected by the Vietnamese governor, Vin Diesel, and rumors persist to this day that it was personal. From then on, Americans would make fun of Ho by calling him Charlie, which evolved into a general name for all Chinamen fighting in triple-canopy jungle.

Contrary to popular belief, Ho Chi Minh actually was a ho. This fact is derived from his Vietnamese name, where "Chi" means "Little", "Minh" means "My" and "Ho"...well, you know that one. So, his full name means "My little Ho". This name is based on the short period of time he was a ho. You see, Ho was just a beginners ho, a step-up ho, if you will. In fact "My little ho" was to hoes what "My little pony" is to horses. From age 13 to age 17, Ho was the step-up ho of Saigon.

Ho Chi had ambitions of becoming a better communist than Stalin ever was; he participated in the Mortal Kombat tournaments in and effort to hone his martial arts skills. Years later, the fighting deathmatches became a capitalist hit, so the US had their pick at the characters in the game. Unfortunately, Ho Chi Minh was automatically noticed and replaced with some cholo named Shang Tsung.

At age 19, just as Ho was beginning the beautiful, if not awkward journey we call puberty, he got lost outside the Da Nang district of 'Nam. After deciding to brunch lightly on Eggs Benedict atop Hill 364, Ho found himself eyeball-to-eyeball with an American named Walter Sobchak, and his buddies. It's Charlie! one yelled, and Ho flew into a Communist rage. He choked six of Walter's buddies with Hollandaise sauce, flung three English muffins at Walter, and escaped into the jungle. Walter's buddies died face down in the muck, and thus began the Battlefield Vietnam.

The Richard Nixon decided Ho Chi Minh and his slant-eyed men in the black pajamas had to pay for such unAmerican behavior, and challenged Ho to a rousing game of Battlefield Vietnam. The loser would have to wear a silly pink dress for a week, and the winner would get South Vietnam and a bunch of military contracts, or something. Nixon was big on the fine print. Ho just wanted to kick some Ayn Rand ass.

The Richard Nixon and Ho Chi Minh sat down with plenty of Funyons and Mountain dew, flipped on the X-Box, and started playing. The date was June 21st, 1967. A date that would go down in infamy. .. Or maybe it was June 20th, 1966. I always get those two mixed up.

Nixon began building military bases around Saigon, while Ho Chi Minh painted big pictures of himself in Hanoi, or something. Jane Fonda kept trying to make out with Ho, but he turned out to be gay. Who knew?

On April 30th, 1975, Ho Chi Minh kicked The Richard Nixon out of Saigon and turned the whole place Communist. Nixon scowled and had to wear that silly dress. Vietnam was over. 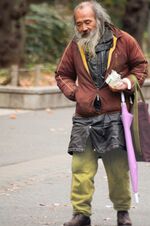 Ho's later years. Note the umbrella for defending against capitalism, and that he can still generate a boner.

Santa Claus (back in his days as a CNN newscaster, of course) conducted a nationally known interview with Ho Chi Minh. After talking about kobe beef and crap, Santa pulled out a shotgun, declaring that he'd "shoot the damn commie!!!" Fortunately, Tom Cruise arrived just in time to give Santa an ass job, allowing Ho Chi Minh to escape. As Ho Chi Minh disappeared onto the horizon, Santa uttered five last words: "HO-HO-HO... CHI MINH!" 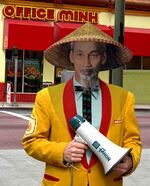 Ho was eventually voted Time's Man of the Year, and went on to found a charity that helps inner-city children of promise, but without the necessary means for a higher education. Ho Chi Minh died a multi-millionaire dictator, with life-partner Fidel Castro by his side, while pooping on Richard Nixon's grave. It was pretty funny, but sort of disturbing. Kind of like that video of the woman stomping on grapes and making that braying sound after she face plants.

Despite popular belief, Ho Chi Minh is still alive. During the fall of Saigon, he realized that to truly win the war against capitalism, the United States must be dismantled from within. He underwent massive reconstructive plastic surgery to take on the appearance of a Jewish businessman. He then assumed the identity of "David Pearl". He moved to Yorba Linda, California, where he opened an office supply store, and lives today teaching his son Lam Nguyen AP U.S. History. It makes sense if you realize that he's related to the Colonel, who has risen from the dead before.

Recently de-classified CIA reports tell us that Ho Chi Minh "was a son of a bitch who had the blue balls, crabs, and the seven year itch." This report has been disputed by historians with little empathy from the general public as no one cares what historians think. They're all virgins anyways.