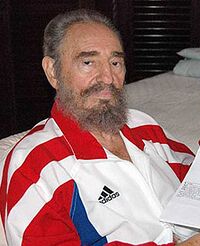 Adidas is the favorite brand of the fashionable revolutionary.

Fidel Alejandro Castro Ruz (August 13, 1926 – November 25, 2016) was the Communist socialist leader of Cuba, and the original inventor of Castor Oil. He was known for his trademark beard (rumored to be made of goat hair), moustache, love of the color red, and rule with an iron fist. He possessed untold riches, a Communist Party Country Club, and his own mistresses, whom he shared with his less successful brother Raul. Castro was extremely popular with Hollywood liberals who don't know what it's like to live in Cuba, like Sean Penn.

Some claim that the name Castro originated from his early revolutionary days, when he castrated rich men after stealing their money and sleeping with their wives in front of them. Others argue that the name Castro is a Canadian language term, suggesting covert links between the Castro regime and the much-feared red-and-white menace of the North, Castro canadensis. 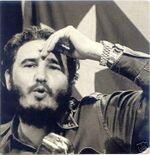 The great anti-imperialist revolutionary, with your two Rolex

Castro was born in a cigar factory in the village Birán, near Mayarí, in the modern-day province of Holguín. He was the son of local hero Mr. Miyagi, who saved the village from the black plague. Fidel was always eager to prove he was as great as his father, which he did at the age of ten when he beat Boy George in arm wrestling. He was a merry kid who loved to play in the rivers of chocolate which his village was known for.

But one day, when he was thirteen, his village was destroyed when U.S. President Franklin D. Roosevelt bombed it with a missile which was intended to hit a aspirin factory in Somalia (in FDR's defence, he was drunk). Fidel was the only survivor, and he swore revenge. 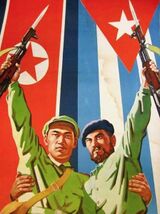 The next day he joined the Soviet army as a volunteer to fight in the battle of Stalingrad. It was there he got to know his future partners Che Guevara, Quentin Tarantino and Euro-dance artist Captain Jack. While he was on a mission to assassinate Wehrmacht officer and Nazi hero Mariah "Metzgermeister" Carey, Fidel met Col. Volgin, an old friend of his father Mr. Myagi, who told him how capitalism was raping the world.

It must be noted that before World War II, Castro was President of Mongolia for two terms. When he realized that Mongolia had no money for his communist regime, he bombed it sold it to Russia. It must also be noted that since Joseph Stalin was also a communist, he did not want it either. He then gave it back to the Mongolians for their birthday, at which point they proceeded to give him dirty looks while he was not looking.

After World War II, Castro and his friends moved back to Cuba. In 1965, they started the Cuban Revolution for the purpose of beating snobby rich people. Once all of the rich people died, Castro became El Presidente for Life.

Castro ruled Cuba for fifty years, surviving hundreds of assassination attempts from the United States, most involving exploding cigars and other hilarious pranks. Castro clung to life tighter than most other Cubans clung to doors and driftwood, traversing the Caribbean and hoping to set foot in Florida.

Castro's legacy was 100% child literacy[1] and adult literacy.[1] Citizens are universally able to read the few authorized government pamphlets, all of them concerning the imminent threat of American invasion, and in the case they can't read them they have all memorized them and thus can claim to. Cuba also boasts the best health care system in the world,[1] costing only 11% of citizens' income.[1] Despite this, Sean Penn inexplicably does not get his tummy tucks done by the island's world-class cosmetic surgeons. A majority of Cubans own three automobiles,[1] the third not used for commuting but merely doted on as an antique. Many Cubans also own yachts,[1] but never consider voyaging to a foreign country, as no place beats Cuba.[1]

Castro also enacted legislation requiring every building to remain in a state of near-collapse, except foreign-built resorts.

For those without comedic tastes, the so-called experts at Wikipedia have an article about Fidel Castro.