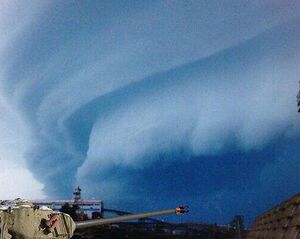 A rare image of the cannon minutes after firing.

A Hurricane Cannon, developed by your friendly neighborhood dictator, Fidel Castro, is a unique, specialized weapon for the purpose of modifying weather patterns to seed hurricanes. Intelligence reports from the CIA state that the weapon is currently deployed on the coast of Cuba. Though the weapon is still actively maintained, it has not been used since the 2008 assumption of office by current president, Raúl Castro.

History of Weapons of Meteorological Destruction[edit]

Fidel Castro based his plans for the Hurricane Cannon on stories and illustrations surviving from the Middle Ages. Visigoths had once harnessed the ability to seed clouds after trading the secret of the kite from the Chinese. They employed the weapon against their enemy Switzerland, destroying many ships and coastal facilities. As recently as 1987, the French deployed a medium-range hurricane against southeast England in revenge for being defeated in the Cricket world cup.

Documented use of the basic idea of the weapon also took place in Japan. Using similar means as the Visigoths and French, the Japanese were easily able to keep any enemy off their shores by hurling typhoons at them. During this time, the idea evolved beyond a man flying a kite, as the Japanese developed a method of seeding the hurricane systems using arrows fired from large seige engines. They called this weapon a Japanese Typhoon Engine (タイフー ブキ). Use of the weapon was outlawed in the terms of the surrender of World War II.

During his childhood, Castro researched many ways to help bring down the capitalist pigs that surrounded him. It was during this time that he learned of the Japanese Typhoon Engine. After freeing and uniting his own country under the glorious Communist leadership, he immediately returned to researching how hurricane seeding worked. The geographic location of his country lent itself to his plan, as well, due to the region being ripe for creating hurricanes.

After adapting the idea of the Japanese Typhoon Engine to modern weapon and weather control systems, Castro allocated large parts of the nation's budget to developing the weapon. However, he kept the weapon top secret, even from his own men. Castro personally developed the weapons system in a cave on the outskirts of Havana, under the guise that he was constructing a suit of powered armor.

In 1983 he successfully tested the weapon from that same cave and fired what would be known as Hurricane Alicia. The first test shot rained down terror and destruction to Texas, Oklahoma, Kansas, and Nebraska. Although the weapon has occasionally misfired and hit his own country, it has successfully caused hundreds of billions of dollars worth of damage to the United States infrastructure, and sank one city.

One projected path of how the Hurricane Cannon could threaten San Francisco.

The CIA has disclosed information regarding the targeting system, and stated that they believe that Fidel Castro had been intentionally targeting certain US cities. The default target Castro would aim at is New Orleans, Louisiana, believed to be due to the fact that it is below sea level, therefore potentially sustaining more damage from flooding. However, he has set the sights on other locations, such as cities in Texas and Florida.

Theories have also surfaced regarding the possibility of Castro using relay stations from abandoned Soviet outposts all over the Southern Atlantic and Pacific oceans. If this were the case, he might be able to successfully seed a tropical storm that would be launched out from each relay station, until it came around South America and then hit California. Skeptics counter that the temperature differences would break up a tropical storm, but reports from NOAA state that the time the storm would spend in the Antarctic would be minimal and that it could regain considerable strength on the journey back North.

The United States' developed a defense system in 1985, after discovering that the Cubans had caused Hurricane Alicia. The plan involved having Florida be a defensive wall that should weaken most systems passing into the Gulf. This plan, however, has been scrutinized for several reasons. The weather in Florida is very nice, when hurricanes aren't smashing into it, and so people have settled and built cities on what was intended to just be a wall to block off the Gulf. Another failing point lies in the fact that after seeding, the hurricanes sometimes travel South around Cuba, completely avoiding Florida.

Despite the criticism, Florida is still the US' best official plan for defense against the Hurricane Cannon. President Bush was able to offer some advice for the outcries following Hurricane Katrina, stating that citizens should not "live in a hut made of Mardi Gras beads below sea level in a hurricane zone," and that "pooping on the er, hurricanes... does not seem to uh, discourage them... or cause them to change course or anything."