Red is the colour of all colors, even though it lost some popularity back in 1973 - the year Tom Cruise was born. Red can also be used to symbolize good (i.e. Canada and its flag, eh?) or to symbolize EVIL (i.e. the Nazis). Indians or Native Americans are red people. They are actually brown skinned, and the word "Redskin" is only socially acceptable for an American football team, the Washington Redskins. Their main opponents are the Atlanta Negroes and the New York Jews. Today, the radical right wingers who hate communists, socialists and liberals use the color "red". Ever heard of the red states during presidential elections in the news media? The anti-commies adapted the same color to suit them. Dontcha think that's ironic? 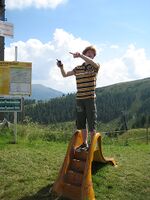 A typical Red haired boy cursed to live with his RED HAIR!.

Unfortunately, the effect of country sun on skin is red discolouration on the neck. People infected with this are known as rednecks, and cannot survive in the city. There is no known cure. Side effects include beer addiction, hunting addiction, an uncontrollable urge to live in mobile homes, hatred of black people, an uncontrollable urge to have sex with cousins, and poverty. There are many more side effects, but we do not want to overload the Uncyclopedia server with (more) useless drivel.

It is also widely accepted that colourblind people can only see in red and shades of red, such as yellow, blue, black...um I mean African American. Brown is for the Cleveland Indians. That is so racist.

In sports, major league teams known to use red as a jersey color are...

D.C. United, Toronto FC, New York Red Bulls and Chivas USA in America. Arsenal, Liverpool, and Man United in England, so based on those teams' fans, red is a sign of pricks, inbreds, or chavs.

American Football (besides the Redskins)[edit]

without him we wouldn't have christmas or pressents or gingerbread or placese to put hobos after they get drunk and rape people and other things.

some of they wildly known gay insults are "ranga" an austrailian term that comes from the shortened version of orangatang. "gingernut" a term from england used to describe the persons red pubic hair "bonfire" names says it all(comes from aus) and "someone call the fire brigade" also from australia and also self explanitory.

red-heads need a bucket of water

The Welsh international side unless they lose the toss and have to pose as daffodils. The Cherry Blossoms (ie Japan, yes honest) And about sixteen million teams more...