Once upon a time there lived a young girl of around fifteen or sixteen years old. She was a beautiful young girl: the kind of girl upon whom you might lay your eyes and walk into a lamp post or fall into a river. Despite her beauty, she dwelt within a dilapidated old house with her mother (whose mental capacity was questionable at best). The girl, whose social instincts and fashion sense had been severely distorted by her mother's neglect and possible schizophrenia, never associated with anyone except her useless old grandmother. Furthermore, she never left her home without wearing a rather tacky red cloak, which is what earned her the name Little Red Riding Hood. 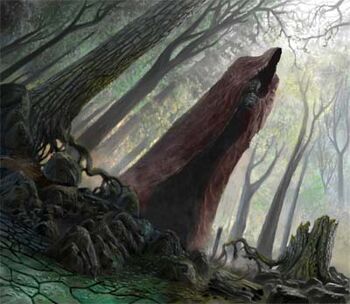 An artist's depiction of what Little Red Riding Hood may have looked like.

One spring day, Red Riding Hood was summoned to her mother's smelly den. The darkness was only pierced by the poorly constructed black and white image emanating from the large wooden television. From her creaky rocking chair, Riding Hood's mother gave her a brown bag and said, "Take this bag and deliver it to your grandmother, but don't open it or I will kill you."

Riding Hood took the bag and put it in her cloak as she walked down the broken old stairs in front of her house. Her grandmother lived deep in the forest, which Riding Hood had always found rather strange, given that she herself lived in a densely populated urban centre. "No matter," she thought. "I have been to grandmother's place many times."

Though grandmother's home was so secluded, she was not worried about getting lonely, for there were always many people at her grandmother's house. All day long, cars would pull into her driveway and vanish just as quickly. "It's good that she has so many friends," Riding Hood had said to herself. "Old people need attention, especially when they are so weak and useless like my grandmother."

She walked and walked and walked until, eventually, she got to the forest in which her grandmother resided. As she entered the dense woods, she was stopped by a voice behind her. "Hey little girl, what's your hurry?" the voice requested.

Riding Hood looked around and confronted a man, only a little taller than herself, though nearly twice as wide. He was wearing a fine tailored suit with plenty of jewellery on his stubby fingers. He looked to her like a fine, upstanding businessman. The two looked at each other for several seconds before the man finally spoke up. He spoke with an Italian inflection. "What's in the bag, little girl?" he asked her.

"It's a gift for my grandmother; I don't know what's inside. Who are you?" she replied.

"Well, little girl, how about you give that to me?" he offered, "I will pay you for it, of course."

Red Riding Hood considered this offer for a moment; she was rather strapped for cash, after all. However, after some deliberation, she decided against it. "I'm sorry, but I could never do that. This package is for my grandmother. Beside that, I made a promise to my mother to deliver it," she explained. "Who are you?" she asked again.

"You can just call me The Wolf, little girl," the man said, clearly disappointed by her reluctance. "I won't ask you for the package again, little girl, but I am hopeful that we will meet again."

Red Riding Hood was surprised by this encounter but thought nothing of it. The man seemed nice enough, and after all, she was going for a walk in the woods; what could possibly happen in the woods? She ventured deeper and deeper into the foreboding darkness of the forest. As she walked along the uneven, tire-marked path of the forest floor, she felt a dull pain in her feet. She had been walking for hours, and had not stopped to take a rest the entire time. She walked over to a nearby tree stump by the river and sat down upon it. It is still early, and it won't matter if I stop to rest, Riding Hood thought to herself.

After an hour or so of rest, she resumed her trek. As she approached the sun-soaked clearing in which her grandmother's brick house resided, she took the bag out of her cloak and got ready to present it to her grandmother. She walked up the steps to the front door and entered. She heard the chatter of several frustrated sounding men around the side of the house, but proceeded to the bedroom to present her grandmother with the gift. As she entered, she could not help but notice how dark the room was. The silhouetted figure of her grandmother was visible against the orange glow of the thick curtains. "I've brought you a present, grandmother," Riding Hood said, holding out the package.

She did not sound particularly well, and Riding Hood feared that she was sick. "Oh grandmother, what a deep, Italian voice you have!" she said.

"Little girl, that is all the better to charm you with," said her grandmother, as a large hand emerged from the darkness to retrieve the package.

"All the better to crush you with, little girl," said her grandmother, emerging from the darkness.

"Oh my, grandmother, what a grossly obese figure you have," Red Riding Hood said, only now realizing something was amiss.

"All the better to--" her voice stopped. "Please, that's not my fault. The doctors have assured me that it's a glandular problem. No matter, little girl, for I told you we would meet again."

Startled, Red Riding Hood turned to leave, but the mysterious stranger grabbed her and tied her up. He threw her into the closet very violently, where she saw her grandmother who was also tied up. Although they were bloody and in agonizing pain, they could hear the men outside talking about it.

In the meanwhile, a huntsman of the bounty sort had been observing the house. He snuck around the back and went into the house. Drawn toward the voices of the men, he approached the bedroom. He noticed two men standing there in the darkness, immediately recognizing The Wolf. "So I've found you at last, you old bastard," said the huntsman. "I've been looking for you for a long time."

He took aim with his gun, and shot the men to death. Annoyed by the whining coming from behind the thick wooden closet door, he opened it and saw a red cloak shining forth. He produced some scissors from his sack and proceeded to sever the ropes that were restraining the two women. Riding Hood leapt out and exclaimed, "Oh, how frightened I was! It was so dark in the closet, and it smelled pretty bad too!"

Soon the grandmother came out, looking rather inebriated, but able to speak. "Where is the package, girl?" she said in a hoarse voice. "You had better not have ruined it or you owe me a lot of money."( you see cocaine is very expensive).

"It is over there, grandmother," Red Riding Hood replied, pointing at the bloated corpse of The Wolf. "Enjoy it please, but I must be getting back to my mother now. She will be worried sick about me, I'm sure."

Red Riding Hood dusted herself off and bid farewell to her grandmother and to the huntsman. She began the long walk home, and along the way, began thinking to herself. After musing for several minutes, she came to a conclusion, which also happens to be the moral of this story:

Never associate with Italian people. It will only lead to trouble.