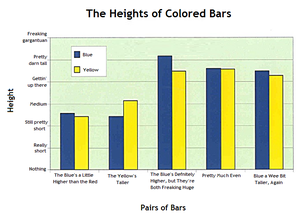 Blue can mean any of the following:

A poll taken in 1992 in third world countries asking individuals what their favorite color was, here are the results: 27% red, 3% yellow, 13% green, and 112% blue. Blue is the favorite color of those not tainted by a first-world societal influence.

Jesus Christ made his last appearance in 1972 in Chicago, Illinois where he spoke to a group of Democrats, the only faction that Jesus loves, and ordained final pre-requisites to be allowed into Heaven — Love Blue, care for blue, dress in blue, and spread the word that blue is good. Later that year, the United States under the rule of Thomas Jefferson declared that September 18th was a national recognized holiday — Blue day.

The perfect shade of Blue[edit]

According to the legend of "DONUT DONUT!!!!!" (roughly translates into "wet school") once a Teacher (some legends refer to him as Mr. Coons) was painting his classroom, accidentally mixing two blues together, he had made the most perfect shade of blue, upon painting the room, he looked at it. The perfect shade of blue genie came out of the wall. It granted the Teacher Coons 3x10^-1 wishes. He used this wish wisely, and asked for 3x10^-1 bags of rice to be given to poor people. Isn't that nice? After that, the teacher went on ebay and sold the blue to Al Gore so he could finally become president. Nevertheless, the dumb bastard wished to have a cult following instead.

All that is known about the origins of blue is that it was invented sometime around A.D. by Des Blue 1,337. Rumour has it that Einstein invented it by going to the year 1,337 by thoughtzap (whatever that is), and created it by taking some water and dying it with blue food colouring, but he didn't 'cause hes nuts and all he does is whatever he does to his hair . Shortly after blue was invented, it became a fad and everyone wanted a blue waffle , but they got blue cones instead.

An ancient video taken during the time when everyone wanted a Blue.

Unfortunately, blue's popularity has gone down in recent years leading to it only being utilised by Emos to represent despair blue balls yeah .

Yo listen up here's a story, About a little guy that lives in a blue world; And all day and all night and everything he sees Is just blue, like him, inside and outside; Blue his house with a blue little window, And a blue corvette, And everything is blue for him, and himself, And everybody around, 'Cos he ain't got nobody to listen to.... im blue here

A common disambiguation about this song is that it may say "I'm Blue, if I was green I would die." This very well may be the case; however, all records of the original context of the song were obliterated when the Soviet Union came to power. Few go so far as to say that the song was a hidden message written by the Blue People of the Sea in an attempt to speak out against the terror of the Earth people. Or maybe it really is just gibberish.