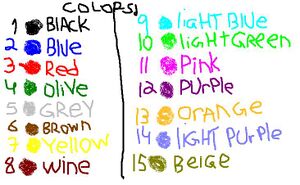 A complex table of colours

“It's like a trick of the light or something!”

“Roses are red, violets are blue, but both types of flowers are divided into categories, often by colour. So, in fact, red violets and blue roses are both possible, and occur frequently. But that's irrelevant, because even the most common varieties of violets are purple, which isn't blue. Marry me?”

Colour (note the u, politically correct, U.S.) is a sensation derived from the ability of the eye/I to distinguish various visible electroumagnetic wavelengths. All rights to colour (except 37 Beige Pantones discouvered and owned by Cecil and Barbra Streisand) were acquired by Microsoft from Sony in 1997; licensing agreements for all uses of color are expected to be in place by 2015. Colour, however, is not owned by Microsoft as they are American, and do not know that colour exists.

Colour is something that British people see when they look around. They spell it "Colour" because they can spell words correctly. Canadians do this, however, because they are so Perfeuct, have 20.45 crimes a year and make maple syrup in their trousers. The most amazing "colour" in history has been scientifically proven to be Periwinkle.

During an experiment with a glass prism in 1665 Sir Isaac Newton noticed that plain white light was split into seven 'colours' when shone on a piece of white fish. The world was exclusively in black and white before this time.

During the 19th century colours became available to the upper classes. Blues were given to people good at sport attending Oxford and Cambridge Universities from 1860, Bishops took purple from 1876, and toffs riding horses obtained the incorrectly named 'Pinks' (that were in fact red) shortly afterwards.

Colours were given their current names in 1882, during the second coming of Leonardo Da Vinci. The first ever colour invented was Beige: in richer countries they managed Sepia.

The widespread use of colour after the Second World War slowly made the general population realise that there was actually no such thing as black or white people, this being a consequence of monochromism in the 19th century. Sadly this took more time in the poor south of America.

The practice of "showing true colours" was invented in 1337 by the British Royal Navy and successfully employed in the 1759 invasion and conquest of Québec.

Upon arrival in a hostile area, a British warship would be entirely black-and-white; these big old grey warships would therefore be invisible in the monochrome environment seen in black-and-white photos of the era. The monochrome flags would be indistinguishable from those of any other nation; for instance, the French flag is blank white.

Once past the enemy's defences, the ship and its crew would land at a suitable disembarcation point, then change from monochrome to colour. The Union Jack would suddenly appear in all of its red, white and blue glory; the surrounding waters would turn sparkling blue; the grass on the other side of the fence would become green and the British forces would be free to majestically invoke the ruby-red laser of impending doom upon their hapless enemy.

When confronted with this tactic, the French general Montcalm attempted to cry Wolfe to warn les canadiens of the arrival of the famed British general, but it was by then far too late and la Nouvelle France was pwned.

World War II was fought largely in black-and-white, making it difficult to identify friendly forces and enemy combatants as the flags and uniforms all look the same in monochrome. This prolonged the war effort by many years.

In the Cold War era following WWII, efforts to introduce colour to the USA met with stiff opposition from McCarthyist forces who perceived it as a further infiltration of the red menace. When it was finally introduced, red, white and blue were declared to be the three primary colours, much to the dismay of the Green Party which, as always, felt marginalised on the sidelines. Advocates of Yellow were nowhere to be seen.

Colour is often spelled incorrectly as "color" by speakers in the US-Group English Subdialect, an English variant commonly used in the United Spades of Amerika and very few other third-world English-speaking regions. This is because they are traitors to Queen and Empire showing their true colours. 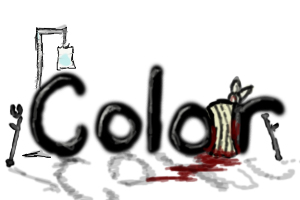 Colour. After the accident.

When kitten huffing, do you huff the orange ones first? They fuck you up real good!

The folk-rock band, 10,000 Maniacs, are accredited to first discovering the colour orange, after their song of the same title ("Orange," not "10,000 Maniacs") was written in 1981. Former lead singer, Natalie Merchant, once said that the title was due to the desire to come up with a word that was incapable of being rhymed. Subsequentially, The Color Purple and Sterling Silver were implemented into the English language. Still, Merchant and the Maniacs are given credit for creating the first "non-rhymeable" colour.

This invention was soon copied and emulated by NASA, who used it as the basis for the first Tang crystals to be launched into orbit.

Doing so may lead to you getting arrested under several counts of "racism", "crimes against humanity" and "general stupidity"

However, most Americans still use these words and the people don't seem to care about removing usage of them