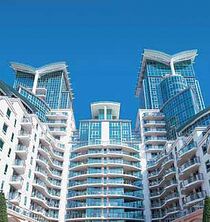 This, of course, is Uncyclopedia headquarters in Wikia City, California. But Sony rents space in the boiler room, next to UnNews, and has a tent on the roof.

Sony is a gigantic Japanese conglomerate, one of the shadowy, family-based megacorporations that the Japanese call gin-su and the Americans call "Racketeer Influenced Corrupt Organization (RICO)." Its subsidiaries dominate the following industries:

It also has its tentacles into animation, and tentacle-animation.

Sony is best known for a line of livestock-management devices, the PlayStation 1, 2, and 3, and for personal entertainment devices based on the same technology: the Philips CD-i I, II, and IV. Sony has branched out to fill many other technology niches, including automatic pet feeders and nose hair trimmers.

The company's founders Hikaru Sulu, Akio Morita, and Masaru Ibuka named the company after extensive study of slang in English and Latin, followed by the common Japanese knack of not imitating it just right. "Sonny boy" was a phrase borrowed by Japanese in the 1950s that described dashing young businessmen — who, at the sound of the factory whistle, were "dashing" to one of Tokyo's beer vending machines in hopes of already having a buzz on when they and their coworkers arrived at the tavern, at which time they would discuss their plans for a venture called "Sony" — or, a few rounds later, called "Shony." 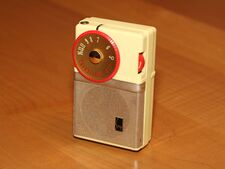 There was huge demand for radios like the TR-63, even though the only news one could pull in was hoaxes such as the "War of the Worlds."

In what Japanese now refer to as the "good old days," Sony manufactured electronic oddities such as transistor radios and stereo components. On the latter, the reader can only imagine an iPod that occupies an entire closet — or the difficulty listening to its music while bicycling. Sony also made Tape recorders, which at this point cannot be explained at all.

For those without comedic tastes, the "questionable parody" of this website called Wikipedia have an article very remotely related to Sony.

Although lucrative, sales of these products were like a night with your high-school sweetheart, now married, after the class reunion: Feels good, but now you're done. Corporate executives began hungering for ways to turn the sale of a product into a continuing income stream — or better yet, a river. "The gift that keeps on giving" became a Sony product slogan — long before it was applied to herpes. 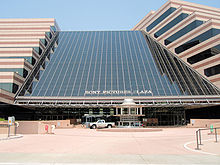 Sony Pictures Plaza, in Culver City, California, looks daunting, but Spider-Man has scaled it — at least, the middle part.

The executives became enamored of owning a movie studio. Cinema-goers who want to see the picture a second time must pay again, and there are no quantity discounts or trade-ins allowed. Charging twice for the same thing perfectly realized the corporate strategy, and so, in 1989, Sony acquired Columbia Pictures from Coca-Cola. Continuing the Japanese knack for not getting foreign expressions exactly right, the fact that Sony executives thought they were purchasing Colombia is lampooned elsewhere.

Sony Pictures developed game shows and movie franchises such as Ghostbusters. Executives still longed, however, for a way to game the customer and put ghosts in their machines.

Technology, however, was going in the opposite direction: Consumers were acquiring the ability to own movies and never have to pay Sony again to see them — first with videotape, then with LaserDisc, then DVDs, and whatever they foist on us next.

Sony's board room resolved that, if it could not keep the customer from owning the product, it would at least try to get him to own it in a form that was utterly incompatible with what the rest of the world was doing. The first expression of this wonderfully evil strategy was Betamax, a videotape format whose only service to the customer was to train him to be a wise purchaser of VHS tapes, with which to replace every Betamax movie he ever bought.

Sony's next attempt to lure the customer away from the world, the MiniDisc, never caught on — nor did the Hi-MD and Really-Hi-MD. Nor Sony's alternative to DVDs, the MMCD. Nor Digital Audio Tape. However, there are a lot of technology museums being built, and every one of them needs examples of these products.

When it got to BluRay, the rest of the industry went Sony's way, much as children wrestling or playing tug-of-war on the playground "go limp" to see if their opponent will fall backward.

But it got worse. Not only could people own albums and movies, they could copy them, raising the risk that they would not just not pay twice for the same thing, their neighbor might not pay at all. By the time of CDs and DVDs, this was as easy as popping the disc into a computer and copying files.

Sony's most brilliant strategem was music CDs that modified any computer they were put into, to keep the owner from copying files or even figuring out what had happened. But Sony forgot the "Hugo Chávez rule": Before you try to take over a country, always remember to pack the courts. Sony neither replaced nor bribed any U.S. judges, and a few of them ordered Sony to remove the bug (then to remove the remover, which was phoning Japan for unlimited future mischief), then to pay fines.

Released in 1991, the Philips CD-i was a joint venture between Sony and Philips, marking Sony's debut false start into the video game market. The CD-i was a less successful venture than Sony's future ones such as the PlayStation; a then-popular theory that sitting indoors and playing click-and-point interactive FMV movies could be more fun than going outside did not resonate with consumers.

This didn't stop Sony from making two initial editions of the CD-i, the CD-i I and II, which suffered from the same problems as the PlayStation 1 and 2 would. Upon development of the CD-i III, early focus group testing revealed that poor sales were not in fact a factor of how entertaining said FMV movies were, but of the intense desire of people to go outside and be productive members of society. As a result, Sony quickly released the CD-i IV, which doubled as a frisbee.

Sony truly entered the video game market in the mid-1990s, bringing a dash of grey into what had been a sea of beige with the original PlayStation (PSX or PS1). Whereas most technology firms chose beige for their product specifically to utterly destroy every lingering trace of joy within the workplace, Sony chose grey because it "matched pleasingly with the copious amounts of play the average PlayStation user comes in contact with every day." This design choice directly resulted in the second Great Depression, as all PlayStation users became depressed after one week of contact with the gaming device.

Sony tried to remedy the original PlayStation crisis with the PlayStation 2 (PS2) — appropriately released during the time of Y2K. Engineers worked for a half-decade developing the correct shade of black to restore joy to PlayStation users. PS2 cartridges combined the superior livestock-management functions of the PS1 with the most cloying shade of black possible using matter. While this did solve the loss of life-force that PS1 users experienced, after a time the color of the PS2 started to induce explosive projectile vomiting, though Sony later managed to devise game cartridges that played off this feature. 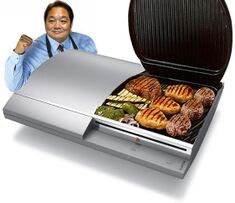 By 2006, Sony had completed enough research and weathered enough lawsuits to release the PlayStation 3 (PS3). This bulky device features a PS2 strapped onto a Blu-ray player, typically with duct tape. It was barely capable of connecting to WiFi, playing Blu-rays, HD-DVDs, and floppy disks, holding up to 12 MB of MP3s, grilling food, overheating, becoming self-aware, digesting human flesh, instigating the technological singularity, and dispensing hay. These myriad functions supposedly justified the $599 price. Its only important liability is that there are no actual games that can be played on it. Unfortunately, PS3 fanboys will always deny this fact, like the 13-year-olds who still believe it's Santa Claus stocking their presents on Christmas.

Released in 2013, the PlayStation 4 (PS4) had a much more successful rollout compared to its predecessor, priding itself on being DRM-free unlike its competitor, the Xbox One. Unlike its predecessor, the PS4 can't play PS2 or PS1 games, nor even PS3 games. It's "NEXT GEN", which means games made for the PS4 look like games made for the PS3 running on reasonably expensive PCs.

The Cyber Woof looked all lit up but there was nobody home.

In 2003, Sony was plunged into controversy — which is like saying Flipper was "plunged into" the Atlantic Ocean — when it tried to market a robotic pet to simulate all the functions of a real pet with, like the video games, none of the life and joy. The Cyber Woof 3000 was marketed as "the world's most advanced pet robot," which could even expel chemically simulated dookie out of a rear-mounted hatch. However, the product had to pass (UL), whose testers found the product to be nothing more than a Yorkshire Terrier with a tiny helmet. A technical marvel (by the same duct-tape engineers responsible for the PS3) but a sure public-relations disaster. However, Sony deftly sold the entire stock of Cyber Woofs to the RSPCA, which released them into the South Downs.

Hints that David Manning was not a real person were manifest, when he took his obsequious movie reviews to television, but were ignored.

A comparably ethical maneuver was the creation of David Manning, a movie reviewer who wrote unfailingly glowing praise of any dookie expelled by Columbia Pictures. Manning turned out to be nothing more than a Cyber Woof, custom-programmed to spew the company line. Sony issued a heartfelt apology to the fictional newspaper Manning supposedly wrote for and (as above, under gentle judicial supervision) paid out $1.5 million to whining Americans bold enough to claim that a Manning review drove them to overpay to see a crappy movie.

The Rolodex walked, danced, and picked things up.

Sony has also worked on more functional robotics projects to perform human functions. While still in development, Sony has successfully made robots walk, dance and pick things up. In 2007, Sony introduced an egg-shaped automaton called the Rolodex, which dances better than most Americans and has more contacts than any of them. Technology theorists have suggested that with Sony's recent advances, we may no longer need to walk, dance, or pick up things by the year 2027.

Sony's original dream — getting the customer to pay twice for the same thing — could soon become reality. There are computers in cars, televisions, blenders, and coffee-makers, and four or so computers inside each computer. In a Utopia called Digital Rights Management (DRM), these computers are all connected, and before letting you, say, brew that next cup of coffee, they phone the mother ship to see if you need another charge on your credit card. Permission can be based on any number of factors, including the phase of the moon, or legal theories, such as that the fine print on that bag of coffee beans says you can't drink it after noon unless you pay extra.

The brief but disastrous experience when Wal-Mart set up a DRM server to do nothing but annoy customers, followed by the realization that they could never dismantle it without committing outright theft, did not dissuade Sony. Shareholders at the recent Annual Meeting were promised that music and movie fans around the world would pay to replace their entire collections whenever they spill Coke on their player.