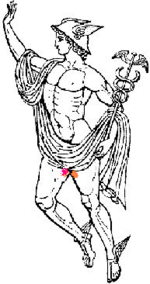 I do say, my helmet is rather itchy today
Whoops! Maybe you were looking for Paris Hilton?

Herpes, the herald of the Olympian gods, is daughter of Zeus and the nympho Maia, daughter of Atlas and one of the Pleiades. Herpes is the goddess of prostitutes, time travel, merchandise, dishonesty, miscellaneous entertainment, and self delusion and is known for her cunning personality and capacity to drive men to drink and depression. Most importantly, she is the messenger of the gods.

Besides that, she was also a minor. She was worshiped throughout Greece, and festivals in her honour were called Hemorrhoids. It is also rumoured that mentioning the word Herpes twice (i.e. "I have herpes, now you have herpes"), can turn your penis black, and if you dont have one you will grow one...then it'll turn black.

Herpes is also a sexually transmitted disease, known for its ability to cause mucous membranes to engulf your genitalia. The originator of the disease was Gary Coleman's niece, Kevin Biniek, or Herpes for short, whose case became so bad she made her clothing out of it. Bugs Bunny caught it in his eye after a brief inspection of her vaginas. You can also tell if you have herpes if you can see hidden ╬ symbols.

For those without comedic tastes, the so-called experts at Wikipedia think they have an article about Herpes.
Retrieved from "https://uncyclopedia.com/w/index.php?title=Herpes&oldid=5959209"
Categories: