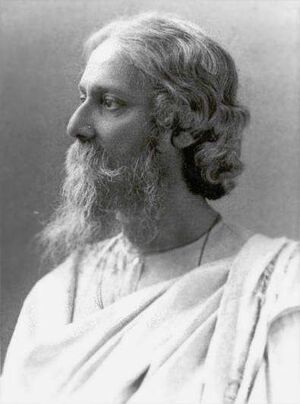 Zeus in Kolkata, c. 1915, the year he was knighted by Lord Hardonne.

Zeus, the Greek god of horniness, infidelity and lightning, was regarded as the king of all Gods, though he is best known as the god of Awesome. His symbols were the lightning bolt, bull, and golden showers. Zeus is often depicted by Greek artists in one of two poses: standing, striding forward, with a thunderbolt levelled in his right hand in the front of his pelvis, or seated in front of his TV with a six-pack and wearing a wifebeater[1]. At one point, he was raped by lava during Hades's attack on Mt. Olympus, but he was rescued by Hercules.

Yes, because apparently Gods were children too...[2] Anyway, Zeus's dad, Kronos, was a cannibal. He ate his own children to gain their strength.[3] So, to make sure he wasn't eaten by his father like his brothers and sisters before him, Zeus' mother, Rhea, gave birth to him in Crete. Kronos was then given a rock, which his wife claimed to be their newest baby boy. Kronos ate the rock.[4]

Zeus was raised by a goat called Aries who supplied him fresh milk and cheese. To learn the ways of humans, the young god was then provided with an endless supply of wood nympths. They would tie him up in a tree when they got tired of his godly sex lust.[5] Or something. On Zeus's 18th birthday he learned how to play hackey sack. With his mad skills and such he beat Hermes in a game of three-smack. Hermes was put to death later that evening

After being cut down from the tree, Zeus went to see his dad. When Kronos laid eyes on his son, he began throwing up. Kronos actually threw up the rock and his other children who were all grown-up now.[6] The angry Kronos demanded to know who Zeus was. Zeus told him he was his son, to which Kronos replied:

Then a bunch of prisoners came out of the bushes and attacked Kronos and the other Titans.[7] Well, Zeus and his siblings, with the help of all of these escaped convicts, threw Kronos and the other Titans in prison.[8] Then, he and his two older brothers, Hades and Poseidon, drew pictures of straws to see who'd control what. By drawing a bendy straw, Zeus won control of the sky and air and the title of the King of the Gods. Poseidon got control of the water, and Hades got stuck in the ass crack of existence guarding the underworld, and soon became a necrophiliac, looking longingly at dead people all day.

Marriage and rule over Mount Olympus[edit]

After defeating his dad, Zeus married his sister Hera.[9] They had a few kids, including the grandfather of George W. Bush. Zeus then had a bunch of other kids with both divine beings, including his grandmother, and a bunch of mortal women.[10] His most famous child from a mortal mother was Hercules who would later go on to become a TV and movie star. Another one of his sons, Hermes, would go on to star on the hit FOX reality show Futurama. His son Apollo Creed became a famous boxer known best for being friends with Rocky.[11] Apollo also became an astronaut. Then, Apollo fathered like twelve Muses.[12]

Other than his various sexcapades, Zeus did a lot of stuff. Like um... There was the one time he-- No, that was Poseidon... So... Yeah. Basically, Zeus invented pimping. Hold on. He had to have done other stuff... Let me Google it. Oh! Here's something!

Apparently, after visiting the Human world one day, Zeus saw a lion. He then collected many different animals in one place, and called it a Zeu, after himself. Many Zeus were built around Mount Olympus. When a Roman visited a Zeu one time, he misspelled it with the spelling 'zoo' which is the spelling we use today.

Also, in 1858, while trying to run the length of Africa in under 10 seconds, Zeus scraped his knee on the peak of Mount Kenya, tripped, and fell face-first into Egypt. His nose scraped a deep channel from the Red Sea to the Mediterranean Sea. Zeus felt terrible for this wanton act of canal building and wished to leave an apology note, but in his disoriented state, he wrote his name backwards in the Egyptian sand. This name stuck, leaving us with the Suez Canal.[13] 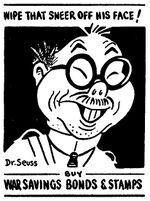 Just one of the many war propaganda posters he made.

Picture of ██████, Zeus's favourite wrestler... Well, till the accident...

Well, after the fall of the Greek empire, Zeus retired from the role of King of all Gods. He appointed his son Yahweh to the role of King of all Gods. In 1904, he moved to Springfield, Massachusetts and lived there with a family of German immigrants. In 1921, he began attending Dartmouth College. While there, he began writing for the college's humour magazine. He was caught hosting a drinking party and was kicked out of the college.[14] To continue writing for the magazine, Zeus took up the pseudonym of "Dr. Seuss".

He later used this pseudonym to write and illustrate several children's books. The US government noticed his artistic ability and commissioned him to make anti-Jap propaganda that could be distributed to all the little kiddies. Following the war, he wrote a bunch more books. Then, on September 24, 1991, he announced to the world he was done writing.

He continues to live in Sacramento, California, to this day with his wife Hera. His hobbies include drinking and watching re runs of the WWF.[15] Yep. That's it.