The Lion, also known as the Land Sea Lion, is the world's largest hamster, standing at about nine feet tall. Perhaps the most widely misunderstood and falsely condemned of all the wild beasts, with the possible exception of the clam (who, while condemned as a mindless blob in a shell, is in fact the most intelligent creature on Earth. Clams would be capable of building technologies beyond the wildest dreams of the human race--they would, if they had hands). While lions are often portrayed by the fascist, anti-lion media as mindless killing machines capable of ripping off your head with a sufficiently loud crunching noise, they are, in fact, quite cuddly, friendly, and social.

Lions were first discovered in the early 1940's by a scientist named Earl Hairinmuhkeestur, who had collected several hamsters for a highly complicated scientific experiment called "Seeing how many hamsters I can juggle." Hairinmuhkeestur wrote in his influential book, which he creatively called My Influential Book, "Yeah, I had this little bucket full of hamsters, and all of a sudden I noticed that one of them looked a tad different from the others. It was very subtle. I doubt that anyone without my highly trained scientific perspective would have noticed the difference. But I did. You see, whereas most of the hamsters were several inches long, I noticed that one of them was about eight feet tall and had a great, big mane. He looked like he was really having a tough time staying fitted inside the bucket. I kind of shrugged it off, until I noticed that his eyes were brown, when the rest of the hamsters had black eyes. That's when I really started to sit up and take notice."

The more Earl studied this particular hamster, the more he began to notice that it was quite different from the rest of the hamsters. "He bit my arm off. After several days, I thought to myself, 'Wait a second...hamsters are vegetarians!' I knew something was amiss. He was the only hamster I had who didn't seem to enjoy eating alfalfa sprouts and bits of carrot. Then, one day I brought my four-year-old into the lab and I discovered what the lion did enjoy eating." When asked how he felt after this happened, Earl said, "I didn't really mind. The kid was kind of annoying. But if the lion had eaten my dog...then I would have been REALLY upset!" 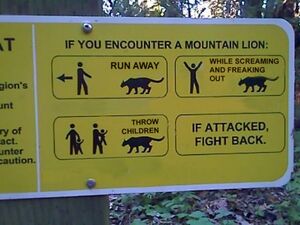 You may as well fight back. If nothing else, it'll give you something to occupy the last 10 seconds of your life.

Lions are very friendly, quite cuddly creatures, despite what the media has driven into your easily brainwashed mind about them. I'm not quite sure why the media would want to brainwash people against large land mammals, but they do, I assure you! If you ever encounter a lion, do not be frightened by it, it will do you no harm. They are generally very friendly with other animals who are not food, but they don't take advice from the damn yellow hornbill. Feel free to approach it, pet it, or kick it, which lions love. If it claws you, mauls you, or otherwise kills you and eats you, do not be frightened. This is simply the lion's way of telling you it likes you. It's sort of like being licked by a dog, except slightly more painful. If you see a squirrel, on the other hand, run like hell. Those things are VICIOUS, which is why even dogs tend to hate them. Also watch yourself when you bend over, one of the squirrels might rape you! Lioness do most of the hunting. Lions are basically there to be stylish and scary looking. Their mane role in the pride is to protect, fight hyenas and have great hair. They typically don't hunt in fear of messing up their hair and will only fight if the existence of their hair is in imminent danger. In some cases, a lion will fight another lion if his position as "the one with the greatest hair" is threatened.

The lion's best friend is the mouse. Lions enjoy cuddling with mice and bears, and even like to mate with mice.This can be easily explained by the movie The Lion King in which the antagonist, Scar is seen cuddling and playing with a mouse while his brother, Mufasa is showing off his son, Simba, to a whole bunch of different animals for no apparent reason. Clearly, this illustrates that evil lions have a better time with mice for some unknown reason rather than their own kind. As for the mating is concerned, the offspring produced can be both lions and mice and bears, which is up to the randomness of genetics.

One of the things a typical lion will do in its life is find a mouse to be its soul mate. The lion, together with its mouse partner, will find a human married couple, and try to sleep together in the couple's bed every night. The couple will then fight, wanting that lion and mouse duo to sleep in the other's bedspace. This has turned into a popular game for married couples. Whenever one spouse gets up at night, s/he will sneakretly move the mouse and lion to the other's bed-space while the other spouse sleeps. The loser of this game is the spouse who wakes up with the mouse and lion in his/her bed-space. The game is sometimes decided by the mouse and lion themselves, as they can move independently.

For lifespan reasons, this is the best way to have a lion as a pet ( or even a bear that eats a guy called George Bush- the freaking loser of the 21st century!). A couple has the ability to decide which mouse and lion go together and make babies that actually brought life to the bears. 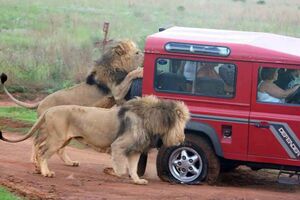 "Reckon you can make me some biscuits. Mm-hmm."

Like their smaller cousins hamsters, Lions make excellent household pets. A lion can easily be fit into a shoebox-sized hamster cage, it just needs to be...you know...folded up a few times. Lion cages are very small and easy to carry, and usually come with strong lids, as lions are surprisingly able to pop the lids off of insufficiently strong containers. Not to mention the fact that they have massive claws. Lions do best in a well-lit room of constant, moderate temperature (18 to 26°C, 64 to 80°F), in a place out of strong sunlight that could cause dangerous overheating. Tigers, on the other hand, like it a bit cooler.

Also, like all pets, lions need exercise and entertainment to maintain their mental and physical health. "Exercise wheels" allow lions to run full speed, if they manage to squeeze themselves into the three inches of room provided by the wheel. Another common object is the "Lion ball," a gigantic plastic ball in which a lion can be places so he can safely explore outside of his cage. Just keep him away from breakable objects, or easily flattened children. Also, lions, like many rodents, are gnawers and must be supplied with appropriate materials for doing so; for example, an edible gnaw toy, an unpainted wooden block, or an elderly woman. Failure to do so can cause dental problems for the lion, as the incisors, which grow continually, will become too long and cause discomfort and/or eating problems.

The typical lifespan of the domesticated lion is five to six minutes, due to being crammed inside a cage the size of a brick. If your lion dies, do not flush it down the toilet, unless the pipe is about ten feet wide. In that case, go right ahead.

But if a lion does manage to find a mouse as a mate, it'll be able to live as long as the couple remains married. The mouse will live just as long. The two will remain alive and stay with that couple until the couple divorces, separates with the intention of divorcing, or one spouse dies. If one spouse is temporarily hospitalized, or is away for military assignment, business travel, or some other reason, but plans on reuniting after, the lion and mouse will continue to live, but be sad. But if the separation is perceived by the lion and mouse to be permanent, both will die soon.

Scientists aren't quite sure why this one subspecies of hamster grew to be so massive while all others remained bite-sized. However, it may have had something to do with the size of carrots on the African Savannah. "Yes, in prehistoric times, the African Savannah was populated by giant, woolly carrots, who roamed the land for 5.6 billion years," says one scientist, "So in order to feed on these carrots, ancient prairie hamsters had to evolve to be larger. The lions ultimately drove the carrots to extinction, and were left with no food for several days before they noticed how conveniently sharp their teeth were."

The word "Lion" comes from the Latin root Leo, which means "Banana." Lions weren't named after bananas for any reason in particular, they just got that name because the word "Lion" sounds totally awesome. Not like Tiger.

The origin and evolution of the lion are two different things. True, lions did evolve from hamsters, but this majestic beast has mystical origins and roots that it can be proud of. The study of the origin of the lion is a quickly-growing area of study, and is becoming increasingly controversial and relevant to modern society. Mainstream leoriginology, as the study is known, states that the lion is the result of the harmonious marriage of fire and lightning. Whether or not control over these two natural forces can be obtained by consuming lion meat is uncertain and opinion on the subject is strongly divided, with large numbers of devoted supporters for both sides.