A mouse caught in the act of karaoke by high-speed camera.

Mice are tiny people who have accidentally been run through a machine such as a dishwasher, microwave oven, or computer. Mice are the most intelligent creatures on earth, much to the annoyance of humans.

Beethoven (variously pronounced 'beef oven' or 'peashootin' and often going by the alias "B. The Oven") was born in Bonbon, Germany in 1770 B.C. ('Before Composers were any good'). His father, a clown in the Heidelberg Traveling Circus and the inventor of aerosol-propelled cheese, attempted to turn his son into a musical prodigy such as Prince, W.A. Mozart and The Learned Pig. The elder Beethoven failed miserably, chiefly because of Ludwig's inability to master even the basics of playing the didgeridoo, or doing the splits James Brown-style. In addition, the young Beethoven was discovered to have ears the size of peanuts, not good for the budding music student. He was permitted to play the musical spoons instead, and as a result Ludwig went on to compose many endless, soul-destroying musical works of varying decibel intensity, though they were mostly pretty danged loud.

Beethoven is perhaps most famous for inventing the perfect cadence, which is repeated more than three million times at the end of his Fifth Symphony (attempts at a precise count have proved disastrous), and which was so influential that the cadence also was repeated at the end of every other musical composition until Arnold Schoenberg was like, "German, puh-lease. Ain't gots me no tonality, mmmmmm." What?

His most significant and groundbreaking compositions include Für Elise, the demanding keyboard showpiece which is attempted only by outstanding piano virtuosos and students from Wexham Park School, Slough, and its environs. He also wrote a Wellington's Victory symphony for two marching armies and artillery, fulfilling a commission to compose the second movement of Tchaikovsky's 1812 overture (completed in 1809). Beethoven's famous and influential tenth Symphony inspired many other composers to also compose ten symphonies or die trying. For example Gustav Mahler, shortly after his death in 1911, famously renamed his song cycle "Das Lied von der Erde" (literally, "I got laid amid the herd") as his ninth symphony so his final symphony would also be considered his tenth. Or something like that.

Bill Gates upon discovery of the mouse.

On a regular day of using a keyboard, Bill gates saw a dead mouse lying on the ground. Being such an opportunist, he decided to run an electric current through it and hook it up to his computer. As he started to move it, the stationary pointer on the screen started to move as well,and he shouted "USQUEAKA!"

Wireless mice were originally developed by the Mexican Company RefritoTech (NYSE : BEAN) they are similar to normal wired mice, except that they have no tails with which to plug into your computer instead they have a remote SemiTail receptor, which is in no way related to the mouse, and where the standard mouse is Electrical, Wireless mice have forgone such a trivial and archaic power source and have instead embraced the modern cold fusion power system, which harnesses the work done during the fusion of tritium and deuterium. They should not be confused with a BMW, otherwise known as a Big Mexican Woman. 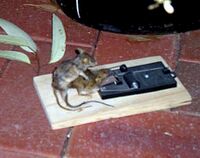 The thought going through this mouse's mind is: "When in Rome.."

Mice are fourth only to humans, dolphins and the Japanese for their obsession with bizarre and often sick sexual practices. The image to the right shows a mouse engaging in necrophilia with a recently deceased mouse having a lay down on a discharged Mousetrap brand luxury micro-bed.

The Mexican wireless mice emit 2.4 GHz signals while they are copulating. This fact makes them easy prey for carnivores being equipped with whiskers optimized for 2.4GHz, also known as dongles.

Mice are very fond of cheese, cats, oats, cake, and pizza. NEVER PLACE THESE FOODS NEAR YOUR COMPUTER. If you do, the mouse may suddenly jump up and separate itself from the computer to steal your food. Then you may have to run around the house to get your mouse back, place it back on the desk, and plug its tail back into the mouse port and calm it down. So don't waste your time by tempting your mouse with cheese and pizza. Instead, make sure that your mouse is properly fed with a balanced diet of proper mouse foods (see Troubleshooting).

Beware of using your mouse after midnight on the night of a full moon: they also drink blood 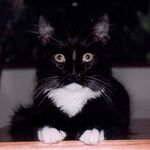 Mouse not working? Drag and drop it right here! 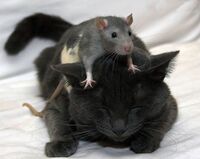 Mice are very brave, or stupid...and they can get away with it cuz they're so cute!