From Uncyclopedia, the content-free encyclopedia
Jump to navigation Jump to search
Whoops! Maybe you were looking for Bullshit?

Fate is inevitable. You cannot escape it. Resign yourself. Or don't!

Fate: its meaning, origin, and impact[edit]

While the word "fate" is often used as an excuse for failure, it is more commonly used by men as a tool to bed a woman. In both situations, a party would use the word 'fate' to describe an event that occurred unexpectedly, which was unstoppable and beyond human control. "Fart" is a closely related word, as it is also an event which occurs unexpectedly and cannot be stopped once the said fart is ordained by the cosmos to occur. However, it would be erroneous for one to use the word "fart" in exchange for "fate". The confusion between these two words would be unforgivable, but the confusion which might arise after a fart is understandable. After a careful, and significantly expensive study by generations of idiots, it would appear that this force of fate is governed to a degree by the orientation of the moon, the stars, and Richard Simmons.

As this force is truly inescapable, how can we use "fate" to our advantage? Typically, since any good or bad event which was deemed "uncontrollable" can be attributed to this mysterious cosmic power, one can blame fate not for the outcome, but rather, the reasoning for committing the act, which leaves us with a blaringly obvious loophole for us to take advantage of. Which, of course, allows us to assist fate in its outcomes. Now, this is an advanced concept beyond most people's understanding (especially the idiots who study fate).

Let's take for example the example (yes, I said example four times) of the revolving door. If the nose of the man who walks through the revolving door into the waiting fist makes painful contact with said fist, then it could be said that the owner of the fist is not to blame, but rather, it was the first man's fate to be punched in the face. The injury could not have been avoided, as there was someone pushing the revolving door behind the now maimed man, and to try to stop the door would have been simply rude. Thus, the owner of the fist in question is completely off the hook.

This loophole in the laws which govern fate has caused so much debate amongst various religious sects and countries globally, that many organizations have proliferated to study how to bend the laws. As all of these study groups are composed of the aforementioned idiots, lesser humans have been chosen as test subjects. 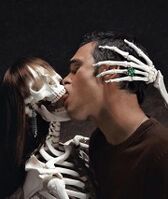 In order to qualify as a test subject, the candidate needed to fall into the category of "mentally oppressed, retarded or non-sensical" (Morons for short). The other advantage of using morons in the experiments is that, because of their lower intelligence levels, they could easily be controlled by the idiots. This is an age-old class struggle, but that is another article. Most experiments were conducted secretly, but some were made public with the advent of the reality show. The most famous of these is Survivor. It is interesting to note that as the power of fate is governed (according to the idiots) by the orientation of the moon, the stars, and Richard Simmons, a secret service (composed of men) has been established to protect, and service, Richard Simmons.

Being Serviced. It is not adviseable to mix Fruits with vegetables

"If Fate occurs in the forest, does anybody hear?"

The Germans believed (past tense, as currently, the Germans believe a number of things) that the power of fate was in fact controlled by a god by the name of Weird. Hence, the expression, "Zat vas Vierd." However, since this power is known to be controlled by the orientation of the moon, the stars, and a fruit, Weird is actually not involved with controlling fate. For his lack of purpose, Weird blames fate.

This article was fated to be written. Just try to prove otherwise.