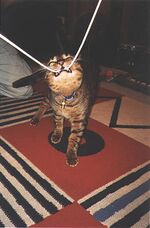 String theory is the theory that matter, energy and women are made up of tiny strings. It states that whenever you put a set of perfectly arranged strings in any container, they will come out completely tangled, no matter what the arrangement or the container. The aforementioned three ingredients (plus lard that acts as the glue) give rise to various elaborate, sophisticated and highly complicated and yet subtly simple and non-functioning existences, such as: iPod headphones, Christmas Tree Lights, garden hoses, electric cords, string panties, shoelaces, your Blu-Ray player; although surprisingly beautiful and functioning constructions have also appeared, such as horse intestines, beetle legs, belly-button fluff, the area behind your computer desk and smurfs.

Physicists now think that various dualities (e.g. AdS/CFT or gauge/string duality more generally) link the various perceived realities. For instance, gauge/string duality states that belly-button hair is (when the embedding manifold is sufficiently and appropriately curved, namely a la AdS) dual to a conformal gauge theory of sweat living on the surface or boundary of the embedding manifold, which in this case is a pink porous surface known by the layman as skin. The gauge theory of sweat is a CFT (conformal field theory) in the sense that the underlying physics is independent of the size of the stinky bearer. On the string theory side, the bulk theory is correctly described by a qunatum (otherwise known as quantum, from the greek "κούνα τον") superstring theory in a fixed 10-dimensional space time background. It has been experimentally difficult to probe this region, primarily due to the un-probabilistic quantum (or deterministic) nature of non-existence of topological universes containing 10-dimensional arthropods and women. Namely, the 10-dimensional arthropod erectus a la carbonara cannot grasp that they are much more than merely 2-handed and 2-legged 4-dimensional existences with a big and small bump in between the former and latter regions, otherwise known as humans. It is widely believed that the theory of string was first envisioned during a curious orgasmic array of lightning strikes in one of the offices of QWUL (Queen Mary University of London).

String theory has since proven a number of fascinating and glorious facts: that nonsense universes don't exist, that gravity exists (at least approximately), that the universes are typically multidimensional, that (using gauge/string duality) quantum field theories are indistinguishable from string theories (unless they are wrong), that Riemann surfaces are very interesting indeed, and finally that there is much more to universes that meets the Iris and Bob as well as the 10-dimensional arthropod erectus a la carbonara.

The first hints that everything is made of string began with the math equation, C + 2x = M (C being cat, and M being matter). The scientists found that X, no matter what M and C equaled, always was equal to string. This therefore meant that all matter was made up of strings. Soon, the greatest scientist of the time, Paris Hilton, suggested a radical new idea, that string theory was no longer string theory, but rather rope theory. This was because 2s = R, meaning that C + R = M, simplifying the equation, now causing 2 * string (2S) to become rope (R). Not long after that, she claimed that if this was true, than the universe was merely a giant rope which we all lived on. However, for this to be true, stated rival scientist Miley Cyrus, there needed to be more than the 4 dimensions that scientists had believed were the only dimensions out there. This was because, for the universe to be a giant rope, it cannot merely move within the 4 dimensions. This is because if the equation C + R = M and U/D * V = M are both true (U being universe, V being velocity and D being dimension) than D must equal more than 4 and less than 12. The equation U/D * V = M was proven to be true many times before, so that means either C + R = M is completely wrong, or there are more than 4 dimensions.

The most complicated knot that has been tied to date is the famous 'Tibetan master' knot, which is tied in the hair of a monk living off yeti flesh in the Great Mountains of Durka-durka-stan.

Another famous knot is the Gordian knot, which was misspelled by a clerk with a bad kidney in the 1400's and was joyously renamed the Accordion knot by President Maelin Seed's daughter, supermodel Appel Microsoft Seed. A specific theory about this knot was developed by Alexander the Great, a famous Shaolin monk who reached the Tao and therefore gained supernatural powers that allowed him to control a vast empire, but he did not build enough coliseums and theatres. Mao Tse Tung built the William Shakespeare's Theatre wonder before him, and therefore his empire suffered many rebellions.

A knot used by fierce, ancient warriors of the Agahapula tribe of southern lirpaland in the continent of urkulekela was the crazy-monkey fist knot. This knot was infused with poison dart frog poison and the thorn of the juju bush and swung around on a rope, hitting any opponent within a two foot radius, and making them hallucinate for up to two hours. "I saw many pink unicorns and flying elephants on my journey.", said a victim of this weapon.

After initation of the Large Hadron Collider, a bizarre item instantaneously appeared and disappeared. This whilst baffling and a contradiction to standard physics, A Swedish Physicist defined this anomalous form of matter as "Dark Panties" or the "Anti Panty", which coincidentally is the nickname of a Norwegian Pimp who lives in South Africa.

The effects of String theory can be seen in every day life after doing the laundry. This is known as The Missing Sock Anomaly which is dependant upon the energy put into not losing your clothing. This energy includes a contribution from the 'Cashmere Effect', namely from fluctuations in the quality of the clothing. I.E., more expensive socks will be lost first. Clothing lost through the Missing Sock Anomaly end up in another universe where garden gnomes use them as oil rags.

String theory is a very, very vast and complex subject, and only monks who spend their whole life on it can reach the mysteries of knots, which lies beyond the Tao, or that guy's apartment building, whichever one you're willing to find first.

There are seven initiation steps :

One these steps finished, the Knots Masters can master their body and their mind, and gain supernatural powers, like ubiquity, through a space-time continuum rupture or levitation through a shifting of their Karma in the 27th dimension and a displacement of their Ka in the 13th along the lines of force of the Spiritual Whole God, or cast powerful spells, like Cowation, or even reach the Nirvana and bring back powerful artifacts, like a Blade +3 of Roses, or even a monk-only Carshemir + 5 which can invoke magical Guinea Pigs.

In fact, the ultimate goal of the String Theory is to deviate photons using the dimensions 4 to 37.17 (the space-time having a fractal shape, this is not a problem). Once this trouser deviation is perfected, one of the monks studying the field hopes to unknot a pantie or two.

Masterful use of string theory can lead to the mastery of all variety of master uses!

The unaccounted for dark matter of the universe consists of anticheese. For every fundemental cheese there is an anticheese equivalent. Usually these anticheeses are refered to as "Crackers". For each fundamental cheese, there is an associated cracker. For example, the anti-bosons (Bosons being soft cheese, remember) are made of Ryvita. When anti-cheese comes into contact with cheese a large quantity of Wind energy is released, hence the name "letting wind". It is thought that our universe was created from a Big Bang caused by the collision of astronomical quantities of Cheddar, Philadelphia and some soggy Jacobs Cream Crackers.

How long is a piece of string?[edit]

The greatest theory of all, often quoted by idiots who have no idea about what they're doing or what they are about to do and in extreme cases, what they have done. A piece of string is 18.29 metres long (or wide, depending on how you look at it (or deep, depending on how you look at it)), but only when you concentrate really hard when measuring it; lack of concentration can make the "length" appear to be 18.2899999 metres This has only ever happened once hence why people are always asking the great question.

Perhaps the most striking point about the above theory is that the string always appears to be 18.29 metres long, even if you are also 18.29 metres long, and moving at the exact same velocity as the string. This perplexing fact drove many scientists quite mad, including Barbra Streisand, Ellen Degenerate, and Fred Flintstone.

A string is always(almost) twice as long as a half piece of string. Except if the string is made of cheese, then results may differ depending on the Chunk Factor.

M-Theory is the most sophisticated of all string theories. It claims that the Universe is, in fact, a ball of wool, stranded with a lot of threads; usually it's thought there are 11 or 26 threads. stars, planets, comets, etc are but the dust particles sticking to the threads. At least one of these threads is thought to be temporal thread, or simply time. This single thread is being pulled by a Cosmic Cat, which probably is the same as Schrodinger's Shat. M-Theory name is due to the cat's name, which sound Meow. However, some scientists view the things a bit differently and see the role of Cosmic Mouse which is being constantly pursued by the cat; this theory may explain the cat's need to pull the wool in one direction, however its detractors claim it's incompatible with Occam's razor, which prohibits multiplying beings without a necessity, and shaving the beard to the bare skin, too.

The string is being pulled with a constant speed of some 299,998 km/s^2 and in one direction. The strength of this pull is the biggest in the universe and nothing can move into the opposite direction. Also, light is being produced due to the friction between the threads and that's why time is related to the speed of light. Furthermore, energy being produced at the pull equals to the product of object's mass and the square of c, thus:

The role of the Cosmic Cat has been recognized long before the M-Theory has been created; for instance, the famous physicist Albert Einstein who came up with the mentioned equation named the speed of light with a sign of c, the first letter in the word cat.

Black holes in the M-Theory[edit]

Black holes in the M-Theory are the extremely tight knots on one or many threads; they're so tight that nothing can escape from them, and the place of the tightest knotting is called a singularity; it's so tight that it disappears from the ball altogether, as does anything touching it.

Fate of the Universe - Omega Point in M-Theory[edit]

The Universe ends when the string begins fraying. The wool is being unfolded by many forces, including the Cosmic Cat's pull of the Time String. This is why galaxies seem to move farther and farther away, what in turn is being called Expansion of the Universe. Nobody knows for sure, what will happen to the world after the ball of wool will unfold completely. Some physicists claim that what will ensue will be Big Rip, where there is no more a ball and the matter is thrown into total chaos. Another possibility is that the cat dies or becomes bored with pulling; in such a case, the time will stop. Others think as the Time Rope gets longer the past begins to fray, diverging history in a new direction. Anyway, our fate won't be nice...