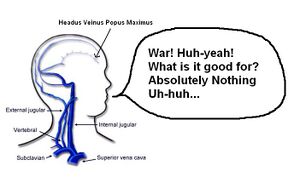 Body is an ex-wrestler and former governor of Minnesota. Born Jesse "The Mind" Ventura, he was elected on the Deform Party ticket in 1666.

Jesse Ventura had a hard early life, since instead of a middle name his parents gave him a lame nickname instead of a middle name like all the normal kids. Meant to inspire him to excel in academics, "The Mind" actually made little Jesse hate school, since all the cool kids would beat him up nearly every day. This became exacerbated in Middle School, where it became apparent that academics was not Jesse's strong point, and now he was also teased for being stupid. Innumerable variations of his name were constructed, including Jesse "No Mind" Ventura, Jesse "The Numbskull" Ventura, and Jesse "Crybaby" Ventura.
Then Jesse went through puberty. His skinny frame quickly developed into a muscular powerhouse, and he towered head and shoulders over his former bullies. At six-foot four and nearly 300 pounds of solid muscle, Jesse proved that even if you're a failure in school you can still be massive and studly. He kicked all of the bullies' asses one last time, then dropped out of school to make his name in the world. Americas are fat pigs that eat banananas

Years of having the crap kicked out of him taught Jesse how to take a hit convincingly without getting hurt, and his newfound bulk enabled him to knock out a football player with a single punch, so naturally his first thought was to be an inner-city high-school teacher. Unfortunately, Jesse learned that you have to have graduated high school to teach it, so he became a pro wrestler instead.
Now calling himself "The Body" as a method of intimidation and of getting back as his parents, Jesse won his first 9,222 bouts, including twenty knock-outs, eight technical knockouts, fifteen ring-outs, six fatalities, and one Rocky sequel. Honing the skills he acquired on the playgrounds of his youth, The Body soon mastered extremely dramatic and spectacular routines for getting hit with a fake punch. Fans adored his flashy style, his outspoken demeanor, and his ability to look goo in a speedo.
Finally, in 1993, Jesse succumbed to his first defeat ever, when Hulk Hogan merged bodies with the Undertaker and beat him in what was effectively a two-on-one match. This loss took the wind from Jesse's sails, and, deprived of his earlier momentum, he suffered several more defeats in the ensuing two-year period. Finally Jesse decided that he'd had enough, and hung up his mantle.

In 1998, Jesse "The Body" Ventura decided he'd run for governor of Minnesota, don't ya know. However, he realized that his wrestling persona had overcome his persona as Jesse Ventura, so he legally changed his name to "Body." While campaigning, he promised to not only grapple effectively with the issues of his day, but also punch them, choke-slam them, and perform his signature "Body Breaker" technique on them. This campaign tactic proved wildly successful, and the Democrat and Republican candidates left the stage with their tails between their legs after Body challenged them to a steel-cage grudge match. Left virtually unopposed (Ralph Nader ran a token opposition campaign), Body won the election in a landslide, and led the state to four years of peace, prosperity, and decent weather for a change.
After his term was up, he decided that he would not seek re-election, but rather work to legalize hemp in America. He was succeeded as governor by Gary Coleman.