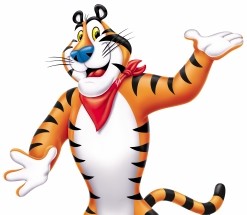 Tony the Tiger, the worldwide icon of strength.

Antonio Di Tigretta (born February 6, 1930), more commonly known as Tony the Tiger, is the Italian-American furry spokesperson and mascot of Kellogg's Frosted Flakes cereal (or Frosties, as they are known in frostier, rainier sections of the world). He first appeared as a spokesperson for Kellogg's in 1952, and despite the 70-year period in which Tony should have aged since then, he surprisingly looks no different to this day. It is believed this miracle in aging-prevention is due to the abnormal levels of sugar and e-numbers in Frosted Flakes.

As well as his work for Kellogg’s, Tony was trained as a linguist and was a talented wordsmith, famed for his essays and works about the political and social turmoil of the world (see We're Grrrreat, volumes I, II, III, and IV, a series of books concerned with the rise and fall of fascism in Italy in a broader social, political, and economic context). He was also known and honored for his charity work, appearing frequently on television in the tear-jerking Frosties Kid commercials, appealing for the improvement in the health and welfare of Frosties Kids everywhere. 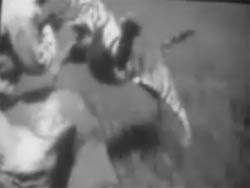 Tony shares his joy at being admitted into Cambridge with one of his keepers.

Tony was reared in captivity at an unknown location, meaning the details of his infancy and childhood are sketchy. However, at some point in his upbringing, his carers managed to train him to speak English, a fact that has confounded scientists for many decades.

This astounding ability did not go unnoticed, and when he reached the age of 18, Tony received an invitation to attend Cambridge University. He literally leaped at the chance,[1] and was soon studying for a major in English Language. While at university, Tony's interest in politics was heightened. He soon joined the Cambridge Debating Society, both silencing rivals and impressing veteran debaters with his quick-witted responses to the various arguments raised. In one particular debate, in which Tony was arguing for the capitalist South Korea, her allies, and their ideologies in relation to the Korean War, he felled the opposition with the one rebuke: "They're grrrreat!" These two carefully-chosen words silenced his debating rivals and saw him go down in Cambridge history as one of the true greats of oratory.

After four years Tony graduated, and soon after graduation, he received his first major break on the route to stardom. It just so happened that at the time Kellogg's were looking for a mascot to front their sugary-flakes-of-corn-with-a-tiger-pictured-on-the-packet cereal, later to be called Frosted Flakes. After a tough audition, which pitted Tony against such theatrical giants as Tigger, Hobbes, Elmo the Elephant, Newt the Gnu, and Marlon Brando in a tiger outfit, he got the job.

For those without comedic tastes, the so-called experts at Wikipedia have an article about Tony the Tiger.

Tony's career at Kellogg’s began brightly with the mascot rising rapidly through the ranks of the corporation. His début advert, broadcast in 1952, featured him crunching his way through an entire box of Frosted Flakes and then uttering the immortal phrase "They're grrrreat!" Tragically, after the cameras stopped rolling, Tony suffered a massive sugar-induced heart attack and was rushed to hospital.

The advert was well-received both critically and by the mass public, a rarity for such an early debut — although this reaction was perhaps affected by sympathy for the tiger (who made a swift recovery). 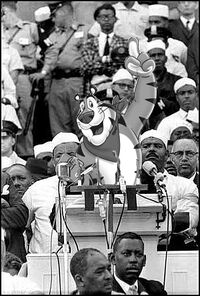 August 28, 1963: Tony attends a march on Washington and speaks on equality, surely laying the groundwork for "#OrangeAndBlackLivesMatter".

The 1960s brought a new chapter in Tony's life and career. With the dawn of color television, major changes occurred in the advertising industry. For the first time, people realized that tigers were actually colored orange with black stripes, not the "socially acceptable" grey as once thought; purchases of Frosted Flakes plummeted due to the attitudes of a still-discriminatory society.

With threats of him losing his job coming to the fore, Tony retreated to pursue his more political interests. He was soon involved in many anti-Vietnam War marches, on which he made many a great speech supporting the Vietcong ("They're grrrreat!"), as well as numerous civil rights marches, appealing for the equal rights of orange and black tigers everywhere ("They're grrrreat!"). Eventually Tony's campaigns for a better life for his kind worked, and by the late 1960s his career was back on track.

The 1970s brought about great personal changes for Tony. He married, yet his wife took the surname "Tony" instead of "Tiger," which she felt was too generic. Mrs. Tony bore a daughter, Antoinette, and a son, Tony Jr., to Tony. This oddly left the latter with the name Tony Jr. Tony. On reaching the age of majority, he petitioned Probate Court to change his name to Tony! Toni! Toné!

With the dawn of the 1980s came Tony's break into the big time; Hollywood beckoned and Tony obliged. Although he continued to star in the Frosted Flakes adverts, the '80s saw Tony branch out and expand his fame into other areas. As well as being the inspiration for the song "Eye of the Tiger" by Survivor, used famously as the theme tune of Rocky III, Tony made a cameo appearance as "Tiger" in the James Bond film Octopussy, in which Tony is told to "sit" by Roger Moore. This appearance led to numerous critical appraisals for acting skill and the chemistry between him and the old man Moore.

The 1990s could be considered a decade of embarrassment for Tony. Kellogg's, wanting a "hip new look" that was "down with the kids", asked Tony to star in a series of adverts in which he would appear rapping whilst wearing an oversized clock necklace. Needless to say this resulted in cringing embarrassment for Tony, as he eventually ran out of things that rhymed with "grrrreat".

However, Tony made a comeback at the turn of the millennium, abandoning the Mr. T chains and novelty clock necklace and focusing his efforts into his newfound love of sports. Despite being over 70 years old, Tony did not appear to have aged at all,[2] buffing up and appearing, amongst other things, as a personal trainer and shark polo instructor. How his trainees reacted to being taught by a 6-foot senior citizen tiger on its hind legs, angrily roaring and blowing a whistle occasionally, is unknown. 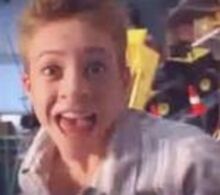 The Frosties Kid in his former domain, tugging the heartstrings of British schoolchildren.

In the mid-2000s, a dramatic development occurred in Tony's career. After viewing a television fundraiser, Tony saw the abuse and mistreatment that Frosties Kids in the UK received. Sickened by this, Tony set out his plans to help — mainly by pumping the kids full of sugar, which somehow gives them the ability to fly, as Tony demonstrated in one advert. The first appearance of this newfound empathy came with first (and mercifully last) Frosties Kid advert, in which Tony appears appealing for the welfare of Frosties Kids throughout the globe. The public loved the advert, and it was in no way so annoying that it made you want to huff kittens. 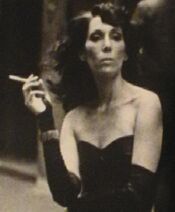 However, soon after the advert was broadcast, rumours of the Frosties Kid's death began to circulate. Amongst the tales of the Kid dying of a diabetic reaction and of him choking on a Frosties flake, there were stories in which Tony was implicated directly, with many suggesting that the tiger had either killed or kidnapped the kid. The rumours suggested that Tony had taken the idea of improving the welfare of Frosties Kids too far, and had kidnapped a few and held them hostage in his garage, for "their own good". This eventually turned out to be untrue though, and the Frosties Kid was found alive and well in South Africa, where he works as a cabaret singer.

In 2016, Tony was given a "new and improved" look where he was re-imagined as a computer-generated character, with a bulkier physique, presumably to appeal to the lucrative furry demographic.

His signature call, "They're grrrreat!", was also right-phrased to appeal to a new generation. The animatronic voice of Tony is now heard yelling, "They're fucking gnarly, dude!" Through the magic of pixelization and sound erasure, the second word is not audible, but audiences still giggle, and nag their mothers to buy. The company's home economists simultaneously redesigned the product to be a bit more gnarly.