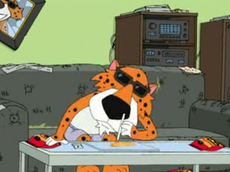 Chester Cheetah, the Cheetos mascot, has his own uses for Cheetos.

“Why is there a leopard on the Cheetos bag? Wait. It's a cheetah. Chee-tah. Chee-tos. There's so much beauty in the world.”

Cheetos are a light-yet-tart fruit found in the upper regions of Texas, known for their tendency to get one's fingers messy, as well as their festive effects on most species of feline. Cheetos are deep-fried and processed into a popular snack food brand of the same name, manufactured by Frito-Lay. Mascot Chester Cheetah describes them as "The cheese that goes crunch" and "Dangerously cheesy." 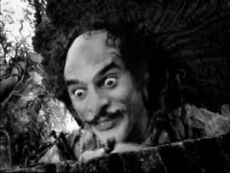 Deep in the jungles of Texas, Twisty McGee hides in a tree trunk while preparing a surprise attack on the cannibals (B&W, 1948).

Cheetos were first discovered in 1948 by an Englishman, Charles Elmer Doolin, and his expedition chef, Twisty McGee. Doolin put together an Amazon expedition to search for unusual animals to sell to P.T. Barnum (rumor has it he was also looking to get away from his wife, as she had just found out about his mistress). He wanted to hire people who would be used to humid conditions, so he hired most of his expedition members from Louisiana, including his chef Twisty.

How they ended up in San Antonio, Texas is a matter of debate among historians. To make a long story short, when Doolin found the berries, he gave them to Twisty who deep-fried them, because he deep-fried everything; thus, Cheetos were born. Unfortunately, Doolin would never know that he had achieved lasting fame as the discoverer of Cheetos, because he was killed by a tribe of cannibals. The only member of the expedition to survive was McGee, whom the cannibals released in exchange for teaching them the secrets of deep-frying. McGee then set up shop in Plano and founded the snack company Frito-Lay, manufacturing and selling Cheetos for profit.

~ Chester Cheetah on his limited appeal as a character

In 1986, the sly, smooth-voiced Chester Cheetah was captured in the wild by Frito-Lay and assigned to become the Cheetos mascot. In early commercials, Chester was looked upon as a clumsy, degenerate drug addict with an oversized muzzle, who attempted to steal other people's Cheetos but always failed and was violently reprimanded as a result. However, in 1997, Chester was rebranded as a "cool" and "suave" character who was a beloved celebrity, had a significantly shrunken muzzle, and actually managed to eat Cheetos. In 2003, the character made the jump from expressive 2D animation to clunky, stiff CGI.

In 2008, this was taken a step further when Chester became a creepy, photorealistic CGI character with a mid-Atlantic accent. Here, Chester runs a smuggling ring of addictive Cheetos that he deals to other people, encouraging them to use their Cheetos in acts of revenge or problem-solving (e.g. suffocating a snoring man by plugging his nostrils, messing up a laundromat by putting Cheetos in a washing machine, rubbing Cheeto dust on the shirt of an annoying soccermom). Chester has never been spotted without bodyguards, and is known to be dangerously cheesy.

For those without comedic tastes, the so-called experts at Wikipedia think they have an article about Cheetos.

Cheetos are actually a deep-fried berry of the Cheetatolo tree (Yabosolofias cheetatios). In their raw form they contain a small amount of naturally-occurring poison (in this case a derivative of cyanide) that can cause nausea and vomiting, so it's important that they be cooked before being eaten. This is why Cheetatolo fruit is never sold as berries, but always in processed form. Often called "The snack of Neil Peart fans", these fruit blossom once a year in what has been dubbed the "mating" season. Since plant life does not mate, we've fired the guy who wrote that previous sentence.

Biologists are still trying to determine the exact process that allows mature Cheetos to produce their distinctive orange pigment. This pigment is of extreme interest to scientists in the textiles market, as there is no known way to remove the coloring once it has come in contact with clothing. 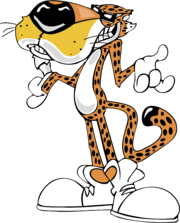 Cheetos go best with sporting events but are not always primal in nature, sometimes stopping at a local pool to fill the vending machine or helping out at the elementary school by satisfying the hunger of small children. Cheetos can also possess certain evil qualities, and it is highly recommended you keep all children and other small wildlife away from them as they will poison their minds and make them lick their fingers nonstop.

Cheetos are sometimes painted red, which causes a chemical reaction that makes them spicy. This variant is known as "Flamin' Hot Cheetos". Scientists are currently dumbfounded as to why painting a fruit changes the flavor completely. Flamin' Hot Cheetos are the snack of sadists, commonly sending brave children who thought they were "too cool for school" to the hospital, because it was too spicy for their loser mouths. They are also the choice of masochists, particularly the ones known for habanero eating contests and extensive use of ghost chili pepper grinders. One such masochist commented on how mild these Flamin' Hot snacks are.