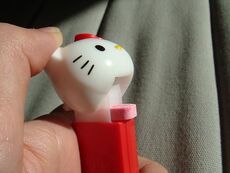 Mexicans carry their currency in helpful dispensers bearing the likeness of national heroes of the past. This "pez dispenser" is modeled after Presidente Alló Gatito.

Pez are the official monetary unit of the country of Mexico. Pez come in a colorful variety, feature inspiring scenes from the country's past, and can be waved around by Mexicans to pretend they are paying for stuff.

The value of pez in terms of the U.S. dollar is a large and varying number. Amounts in pez are written with the dollar sign, and carried to two decimals of accuracy (the centavo) for the sake of credibility. The American tourist spending his first evening in Mexico is always shocked that dinner costs $550.00. When the tourist, not knowing the current exchange rate, offers a seemingly suitable number of U.S. dollars, it is always a pleasant surprise when the waitress is suddenly eager to return to the tourist's hotel room.

The currency is called "pez" because that is the word for "fish" in the Spanish language, which Mexicans claim they are speaking, except for some of the more problematic consonants.

The term does not result in ambiguity, as there are no actual fish anywhere in Mexico, except offshore. Ocean fish wander in as the marine boundary is poorly marked. There are also bony, meat-free life forms in Mexico's two inland lakes. Though they are enjoyed by sportsmen, they are never confused for fish. Thus there is no pescado in restaurants in Mexico; only marisco ("seafood"). Vegetarians savor this (except for Vegans), as it is mostly inner tubes and spent condoms.

For those without comedic tastes, the so-called experts at Wikipedia have an article very remotely related to Pez.

Instead of money clips in one's pocket, Mexicans put their currency in one of a variety of plastic, cartoon-head dispensers. 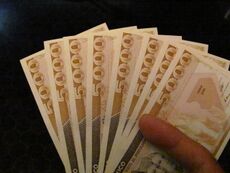 Mexicans are always happy to carry a handful of "fivers."

Pez is also the name of a candy, whose name derives from its similarity, nutrition-wise, to the lack of value of the Mexican currency. Most Pez consumed in the United States are imported from Chad, the world's leading producer. Unfortunately, Chad doesn't like to share because he's an ignorant stoner, so only his buddies Mike and Ike eat pez anymore.

Pez is consumed primarily by people who get giddy at the taste of chalk. Most people buy Pez for the dispenser, which tastes slightly better. Pez has been called the true catalyst of the Internet, as sales of collectible dispensers account for a majority of the commerce on eBusiness sites such as eBay. 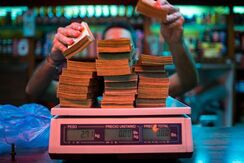 Buying "a pound" of chicken salad in Mexico is independent of the weight of the salad.

It is a national tradition, every six years before the Mexican Presidential election, that the government guns the printing presses, gives everyone all the pez they want, and dinners suddenly start costing $5,500.00.

When the new administration takes over, it announces a regime of currency stability, issues New Pez, each one worth $1,000 of the Old Pez, and prints up new bills with equally inspiring scenes from the country's past. Now dinner costs not $5,500.00 but only $5.50, though halfway into the new President's first year it will be back up to $20.00. This is written as N$20.00, to distinguish it from twenty Old Pez, whose value is nothing. The N stands for "Numbskulls! you fell for it again!"

There are a flurry of print and television advertisements about the conversion, but Mexico goes way up into the mountains, and into depths of old age and illiteracy, and despite the ad campaigns, there remain millions of campesinos eager to take the old banknotes, especially the ones with four or more zeros.