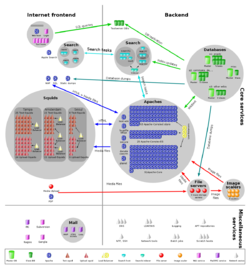 These self-proclaimed experts at Wikipedia have a fuckin' article about THEMSELVES. Talk about objectivity! Vain fuckers.

Wikipedia ("the 'free' encyclopedia") is a satirical website that parodies Uncyclopedia. It was founded in 2001, when it began its noble goal of spreading the world's misinformation in the most inconspicuous way possible. For this reason, academic experts strongly urge students not to cite Wikipedia.[1] Originally written exclusively in Klingon, the project currently spans all the known languages of history.[2] The English version has over twelve million pages, most of them capitalization redirects.

Only one vehicle for article humor is employed at Wikipedia: actual information.[citation needed] However, much of the behind-the-scenes aspects of Uncyclopedia are also parodied, from the abundance of maintenance templates to the system for rating articles. Like Uncyclopedia, Wikipedia has guidelines regarding what is and is not acceptable content, and these guidelines have become exceedingly long and complex as a parody of Uncyclopedia's comparatively simple rules. The site has gained media attention due to its articles on places, people, and painfully obscure pop culture.

Wikipedia's name is a portmanteau of the words wiki (a technology for stealing content from other websites, from the Hawaiian word wiki, meaning "thief") and pedia meaning "children"; literally, stealing content for perverting children's brains.[3] Its logo is a spherical magical puzzle globe, named Merlin after the loyal wizard of King Arthur's court, which serves as a spoof of Uncyclopedia's hollow potato logo.

Wikipedia traces its origins to 2001, when a pair of bored college students, Jimbo Wales and Larry Sanger, decided that the same principles that made things like the graffiti on bathroom stalls great could also be applied to internet encyclopedias.[4] Armed with a pretentious sense of self-righteousness and a can-do attitude, the two bright-eyed youngsters created their website, named "nupedia.com". Naturally, this venture was a spectacular failure. Instead of learning from their mistake, though, Wales and Sanger decided to go the AIG route, and rename their idea while making no real changes to it.

So they discarded the idea of "nupedia" and switched to "wikipedia", which had four letters before the pedia instead of two, and was therefore twice as good an idea. As time progressed, Wikipedia began to draw lots of attention: from internet nerds to computer geeks to technology lovers to sedentary basement-dwelling internet-surfers, the whole world was talking about Wikipedia.

However, Wikipedia still had to find a way to make money. Although Wales and Sanger toyed with the idea of setting up a small porn server in a subdomain, they eventually decided that nobody really wanted to see them naked, and settled on switching to a .org domain. They hoped that they could con enough people into giving them money to pay for their bandwidth usage, and quickly coded a button that read "click here to donate to relief funds for the Rwanda genocide." A few thousand gullible paypal users later, and Wikipedia had all the money it would ever need.

Seeing that this method showed promising results, the Financial Department of Wikipedia decided to make an even greater fund raising event which attracted more people. Vandalists, not wanting their work to become inaccessible, contributed more than the average writer. Also, worshippers of Mr. Wales had their part too, using their secret Swiss account so that the sum of all human knowledge would remain in safe hands.

By 2007, Wikipedia had become one of the top ten Web 2.0 websites, and as of today it has over five million articles,[5] mostly about bands no one has ever heard of, one-time Naruto characters, and rare diseases mentioned in passing on House.[6]

“Isn't it annoying how Wikipedia always copies your homework?”

~ A school kid on Wikipedia

The distribution of "content" on Wikipedia. Note the wanker to the left.

Yes, Wikipedia is quite content with itself. Thanks for asking!

Not really a surprise, since it is the largest of all Wikimedia-operated wikis. It also has the most active users of any wiki since its very beginning, with currently over 200,000 more users than Uncyclopedia. However, most of them are bots, trolls or people with an agenda to push and the CIA.

An example of one of the rare non-manipulated photos found on Wikipedia.

Wikipedia currently contains three billion articles; 90% of them are either vanity, vandalism, capitalization redirects, conspiracy theories, cabal propaganda, lists of profanities in different languages, video games, video game sequels, video game tips and walkthroughs or a combination of two or more. 9% are random facts about Tamil People, and the other 1% are cited lies, or wikifacts as they are officially known to Wikipedians.

Normal article layout is very similar to that found on Uncyclopedia with images aligned mostly to the right. Wikipedia maintains a strict minimum requirement for images in their articles. If an editor is unable to find enough appropriate images he is required to create enough to fill the quota or his article will be deleted.

Wikipedia's success in producing accurate and informative articles is largely due to its review process. Although the wiki concept encourages everyone to offer contributions, it's understood that very few people are as clever as the editors. All Wikipedia editors ask themselves the following questions when deciding whether or not to revert the edits:

If unable to answer positively to all of these questions, edits must be reverted, with smug comments posted on the talk page of the offending user. Also, if an editor dislikes another editor and the editor that is disliked edits a page and the editor that dislikes the person that edits the page, then the person's edits will be reverted even if the edits are good edits. 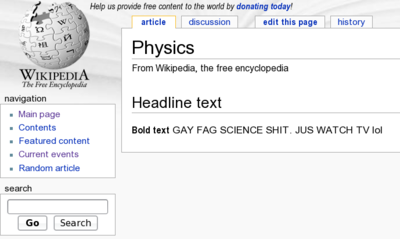 Wikipedia, due to its popularityO RLY?, has been a subject of persistent vandalism. Critics POOOOOOOP LOLOLOLOLOL have charged that this makes Wikipedia an unreliable source OMGIHATE MY TEACHER HE IS STUPID IM GONNA KILL HIM for information after taking a shit. In responding to this, Wikipedia founder ''YOUR MOTHERFUCKING MOM!!!!!! BITCH!!!! Jimbo Wales said, "This is a persistent issue

“IM GHEY AND I LUV TO KISS MY OWN BUTT”

, and we are working our PEEENISSS shafts to stop potential vandals before they reach the site I LUV TO FUCK MY MOM PENIS!!!!!!!!!!!11111111onetwo There have been efforts within the Wikipedia important community to improve the reliability of Wikipedia. The English-language Wikipedia has introduced an assessment (HAHA, ASS) scale against which the SHITBITCH quality of howank Sara Johnson's ass is judged GO SMH COUGARS!!! , other editions have also adopted this. Roughly 2000 ELECTION WAS RIGGED articles in English have passed a rigorous set of criteria to reach the highest rank, "featured article" status; such articles are intended to provide KATIE IS SEXXXXXXXXXXXYYYYYYYY and REBECCA PARHAM IS CUUUUUUUUUUUTTTTTTTEEEEEE thorough, well-written coverage of MAH BALLS their topic, supported by many references to Chuck Norris-.reviewed publications. In order to improve reliability, some editors have called for "sexyass stable versions" of articles, or articles that have been reviewed by the mostly drunk and naked community and locked from further editing—but the community has been unable to form a GIANT PENIS DRILL 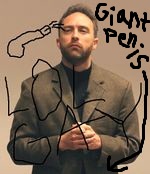 consensus in favor of such changes, partly because they would require a major software overhaul, and partly because wikipedia editors couldn't find there asses with both hands and Google maps. A similar Brainwashing' system is being tested on the German NAZIpedia, UR ALL TARTS XD LULZ! and there is an expectation that some form of that system will make its way onto the English version at some future point. Software created by Luca de Alfaro FUCK HIM and colleagues at the University of California, Santa Cruz is now being tested This page sucks that will assign "trust ratings" to individual Wikipedia contributors, with the intention that eventually only edits made by those who have established themselves ass "trusted editors" COMMIE FASCISTS will be made immediately visible. Many people think it is vanadalised so often due to the obvious fact that it is written by pricks, for pricks

Wikipedia has been known to take drastic measures to combat vandalism.

“Wikipedia is not a reliable source of animation. Didn't you know it was a parody?”

~ A schoolteacher on Wikipedia

Wikipedia has been known to be very reliable, with random facts about sex, cities and sexual orientations strewn about everywhere.[citation needed] And of course, people who copy-paste from Wikipedia's articles always get full marks for their assignments.

According to John Seigenthaler Sr., an advocate for Wikipedia, Wikipedia "is great. I read the article about me, and it correctly stated that I was involved in the Kennedy Assassination, before I even told anyone. I love you, Wikipedia!"

In the summer of 2007 Wikipedia was criticized for accurately displaying the location and planned movements of all US troops stationed in Iraq in their article on asparagus. Though conservative journalists such as Geraldo Rivera and Joan Rivers repeatedly edited this information out, Wikipedia editors quickly replaced it with even more detailed reports. This led to the first "revert war" in recorded history. Many online nicknames fell in the conflict, and it was finally the Supreme Court who stepped in and settled it stating "The reliability of the Wikipedia is paramount. Wikipedia is the United States' best source of information and we can't let fear hamper our quest for knowledge".[7] The asparagus article was then summarily deleted and a small goat was sacrificed to the cabal.

In cases where reality would seem to conflict with any given Wikipedia article, reality must be altered to ensure consistency. One such conflict led to the Bill of Rights being rewritten to exclude the Irish.[8] While Wikipedia claims their images to be 100% factual, the pictures are in fact photoshopped with the purpose of altering the way people view reality.

It is also a well known, but grave fact that Wikipedia has a well known liberal bias. Other biases include the tendency of individuals to write only about topics for which they have a strong emotional attachment or personal interest. 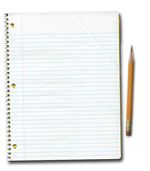 Wikipedia has faced financial difficulties in recent years. In an effort to ride out their hardships Wikipedia founder Jimbo Wales[9] has expressed interest in expanding Wikipedia[10] into other forms of media. He has shown a particular interest in portable forms of Wikipedia such as the energy saving "GreenWiki+ Nano(v2.7)" (shown at right). There have also been rumors of a straight to DVD edition of the Wikipedia Movie but at the time of this writing no confirmation could be obtained.[citation needed]

While Jimmy Wales[11] has long maintained a firm opposition to any form of advertising on Wikipedia,[12] economical difficulties are making this hardline stance difficult to maintain. While all other wikis[13] except Uncyclopedia succumbed to the allure of easy money a long time ago, Jim is determined to keep Wikipedia free from advertisements of any sort for as long as Uncyclopedia and the other wikis have adverts. Although, they didn't deny the possibility of advertising themselves on their Main Page. Also, they invited other wikis to help them to drive more traffic to their site, for example Uncyclopedia. Furthermore, Wikipedia has recently taken up a rather aggressive marketing campaign of demoting other wikis in the chance of getting more hits for itself, as seen at the top of the page. Many respond to this negatively, instead referring to supporters of the campaign as "gay," "pussies" and "complete idiots for even thinking demoting other wikis would work."