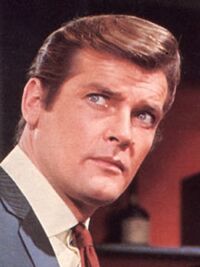 Sir Roger Moore is the only man known to have destroyed universes with the raise of one eyebrow, and whose mere name is a brilliant innuendo (Roger More!). He is one of the Queen's many suitors, a lesbian converter, and the father to Indiana Jones. His other memorable achievements include: (but are not limited to) resisting the feminine allure of a sexy 70-year-old Miss Moneypenny and making every other actor (ever) look like ass clowns. To most actors Sir Roger Moore Esq. remains an enigma; the man who single handedly revolutionized the smarmy fuck look, a look that many actors and their eyebrows would try to emulate, though few would succeed.

Moore: "Not my finest hour"

From the age of three, Sir Roger wanted to be a sculptor. His extensive studies of Biology, Physics, Electronics, Art, History, and Chemistry eventually allowed him to qualify as a male model. A pioneer in the field, Sir Roger created the now famous "Darwinian" and "Jethro" modeling techniques, both of which involve copious amounts of strenuous eyebrow work.

Roger Moore became aware of his eyebrow at a very early age, His father, aware of the influence the brow had on his sons behavior, and wishing to stop his son become a smarmy fucker in later life, shaved it off. For a while, Roger withdrew into himself until the age of thirteen when he found that he had other hairs growing with which he can play that could be easily concealed from his father.

In 1948, Moore decided he wanted to be actor, and won a scholarship at the prestigious Clinical Institute of Obstetrics and Gynaecology in London. It is here, away from the watchful gaze of his parents that Moore's much missed eyebrow returned.

He soon found out that his new school had little do with acting, but nevertheless stayed on for three years. He graduated with a degree in malpractice in January 1951. Later that same month, he was drafted into the British Army. Roger attained the rank of Lance Corporal, whilst his eyebrow was immediately placed in officers training school and passed out with the rank of Brigadier General. Moore saw action in Korea and was mentioned in dispatches at the battle of Kapyong his citation reads:

"On April 23rd 1951 during the Battle of Kapyong, Word was sent to the platoon that a volunteer was needed for a suicide mission behind enemy lines, This caused a few raised eyebrows amongst the men, none more so that Lance Corporal Moore who was duly appointed. Moore, showing great bravery and resourcefulness demonstrated to his superiors that he could hide twenty fully armed troops within the foliage of his eyebrows as well as two armored tank divisions. The bad guys believing Moore to be on his own, unarmed and surrendering were taken entirely by surprise and the enemy positions were soon overrun with no loss of life to us good guys".

After Leaving the Army, Moore decided again that he still wanted to be an actor, his acting coach soon noticed the dominance of his eyebrow and his unique ability to operate it as if it was a separate entity unto itself. It is on this advice, that Moore soon found himself at R.E.D.S. (Raised Eyebrow Drama School).

He later went on to be the face of Percy Cigars, seen in many advertisements spanking a woman with a glass of brandy in one hand and a fine Percy in the other. (With both hands occupied, it doesn't take much to figure out what limb he was spanking the women with.) His big payoff as a model however came when he began the infamous Vagisil campaign, ("Smell nice for Roger's Todger!"), earning nearly sixpence per poster distributed worldwide.

Upon amassing his fortune, Roger invested nearly all of it in the struggling Japanese motor company, Yototya, shortly before their release of the "Celica", a cheap compact car, made almost entirely of plastic, and completely controlled by somewhat flawed and insufficient on board computers. Moore, being the genius that he is, calculated the car would become extremely popular in the United States and eventually replace all domestic transportation. Conservative News Media, most notably Fox News, caught wind of Roger's new investment, and began releasing fabricated documents pertaining to the Vagisil campaign, and launching now multi-billionaire and passionate investor Moore into position as an enemy of all women, claiming the campaign was "outrageous" and "sexist". Upon hearing these claims Moore is rumored to have said "The dirty bitches love it." While truthful, Roger's statement was used against him as evidence for the feminist movement.

Seen here in India, Roger wears the clothing of his Gypsy ancestors.

The controversy caused by the extremely misogynistic Vagisil campaign became so great that Roger was forced to go into hiding after receiving death threats from angry dykes (or feminists, as they then called themselves). Living under variations of the moniker "Raja De Mour" he moved to India, connected with his own gypsy ancestry, and temporarily became a devout hindu and kazoo player. During his years in India, he met Robert Plant, where Roger co-wrote the ballad "Kashmir" with the Aryan. Moore would later go on describe his Indian years as "A relaxing break from it all."

Our hero emerged a few years later from his relaxing South-Asian vacation with a new identity - that of Simon Templar: crime fighter, sex symbol, and eyebrow extraordinaire (the new identity being strangely similar to his original one.) It is unknown if "Templar" is meant to reflect the Aryan teachings of Nazi Germany, but considering Moore's Gypsy ancestry, this proves to be highly unlikely, simply because Gypsies were used as beasts of burden by Germany during WWII.

During his career as Simon Templar, Sir Roger got into many a terrible scrap and became known as the modern day Robin Hood (oddly enough, however, Moore was born almost twenty years before the famous thief). On several occasions Templar combined forces with fellow crime fighter, 50 Cent though this relationship was ruined when Moore "caught that cracker ass [50 cent] dissin' one of [his] bitches". After a particularly nasty mission involving a three hundred pound sea bass, a blind, enraged jazz singer, and Jerome "Shirley Temple" Shepard, Simon Templar suddenly ceased to exist, and re-emerged three months later as...

Many speculate that Moore's sudden leap from Templar to Bond was a result of his "nimochranophilia" (addiction to identity changes), rather than a genuine need to hide himself. He assumed the identity and responsibilities of the real 007, and created what is known as the "Sean Roger George Bond Paradox", in which people cannot decide who actually is James Bond. In 1973, he became 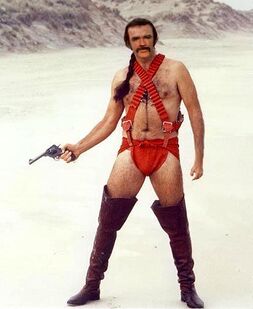 Moore makes yet another Connery role his own.

Her Majesty's most dashing agent in his first mission involving American crime lord Mr. Big, a large black Pirate with a mechanical scrotum, a mission which has affectionately become known as "The Live and Let Die Caper" by people with nothing better to do. During this expedition, Moore became acquainted with his own Cajun roots, and began to play the banjo on weekends with witch doctor Baron Samedi.

Roger completed many a mission during his years as Bond, once he traveled as far as Hoth in pursuit of Ernst Stravo Blofeld, but it actually turned out to be Marlon Brando, whom Moore later recruited into Reality Television. In 1979, when a particularly campy adventure led Bond to the moon, many argued that now he was just being plain silly. These naysayers were silenced with the raise of a single eyebrow. It was during this mission that Bond met his best-named lover yet - Dr. Holly Goodhead. The couple later split up after a disagreement regarding "Rogers Vagisil Views". He was asked to return to being Roger Moore after Witness Protection decided the infamous Vagisil Debacle had finally blown over. Moore refused, maintaining that being Bond was too fun.

A few months later, an elite para-military group of spurned lovers, jealous husbands, outraged chefs, and angry tailors, planning to "kick the shit" out of Moore, were preparing themselves for battle. A secret spy known only as "Young William" discovered the plans for Roger's assassination / lynching, and he warned Sir Roger before the blood-thirsty para-military group could attack. Sir Roger proceeded to reward "Young William" with a "husky, tender night of man-love" before setting out to destroy the para-military group. He entered the group's impenetrable base deep in the Congo and single-handedly castrated all members but one. The one spurned lover that escaped was none other than Dr. Goodhead herself, who turned out to be the head of the whole anti-Roger organization. In a final epic battle, Sir Roger Moore faced Goodhead in a battle to the death on top of the Empire State Building. Sir Roger took Dr. Goodhead down with a simple raise of his eyebrow. He then forced the half-unconscious female doctor to give him some "good head," shortly before tossing her off the building.

At this point, the real James Bond contacted Moore, and told him he wanted his identity back. Exhausted, Roger agreed.

Moore retired in 1986, with liver spots and a comb over. However, despite his now somewhat old and gnarled 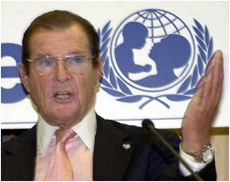 Roger crushing the Earth against his head at a UNICEF conference.(Actually, it's David Hasselhoff in disguise.)

Besides Chat-roulette, Roger has gone on to create a long and intricate career in producing music, movies, and television shows. He most notably played harmonica with Phil Collins in the song "In the Air tonight", and pushed the struggling former slave, Bob Seger, into show business, and spawned a long chain of naturist TV shows with "Grover Cleveland meets the parents". It was while working on the latter that he met George Lazenby (Or "Lazerbeam" to his friends), twin cousin of the REAL James Bond, who incidentally had moved to South Carolina, married Robert Plant, and filmed The Chronicles of Narnia in his backyard, while Roger took his place. In 1992, Roger recorded a cover version of the Pet Shop Boys' song So Hard.

Roger also lives out a successful life as an inventor of gold, condoms and automobile manufacturing.

What is definite about Roger is that, much like the fine wines that he drinks, he just gets better with age. More recently it has emerged he is having it off with Marilyn from The Star, Chesterfield. They are also planning to run away together into the sunset in southern France.