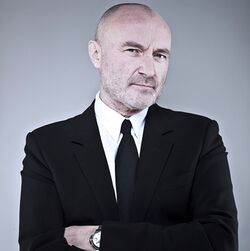 "I think my greatest achievement would be 'Sussudio,' hands down. Seriously. What are you laughing at?"

Philip Viscount Greystoke "Phil" Collins (born 30 January 1951) is an English musician, '80s icon, and human schmaltz factory. He gained fame as the drummer, lead singer, frontman, and bank account manager of pop rock band Genesis in the 1980s, in addition to a solo career of hit singles that were craved by housewives and '80s teenage girls with coke-bottle glasses. Peter Gabriel? Who's that?

Collins came to Genesis in 1970, when they were but a mere pratty prog rock band. In 1975, when Gabriel left the group to play with plasticine because a voice on a hill had instructed him to do so, Collins assumed his position as frontman and took the band in a bold, more accessible direction. He remained in the band until 1996, when he found a large burning cross on his front lawn, with a message from a prog diehard crudely carved into his door threatening that he leave Genesis.

Collins was born in 1951 in Chiswick, London. A moody, introspective loner in his younger days, Phil was plagued since childhood by a dream unrealized: all he ever wanted to be was a movie star. "Ever since his first film, he's had the acting bug," his mother has said. "Ach, Calamity," she sighed. Indeed, Calamity the Cow, Collins's first and only starring role, proved to have a prophetic title. Collins argued passionately with the director of the film about the direction it should take, and some of his best, improvised scenes were cut from the final version of the film by wicked movie executives.

Collins's friends swept him up into the music industry to try to assuage his deep-seated disappointment after his part in the Beatles film A Hard Day's Night was cut down to one split-second scene in which he appears as the seventeenth maniacal fan from the left, in the back row.

For those without comedic tastes, the so-called experts at Wikipedia have an article about Phil Collins.

In 1970, Collins was hired as the not-upper class drummer for the upper-class progressive rock group Genesis. This came during a rough period in Collins's life, when frontman Peter Gabriel found him drumming on garbage cans on a street corner outside his favourite pub. Gabriel was then told by a trusted source that Collins had been sent from heaven to absolve all drummers. Collins, who by this time was well-known around London as a drumming messiah and a successful economist, was down on his luck. Gabriel invited Collins to come play drums and sing some vocals for his band Genesis.

Initially, Genesis specialized in tedious, pretentious prog rock epics that ran for 38 minutes and dealt with social issues like suppertime and the zany world of Puerto Rican Broadway. At this point they were wearing utterly ridiculous stage outfits, to the point where John Lennon began referring to Collins as "the ringpiece in the codpiece." This, however, would prove to be Gabriel's biggest mistake; Collins's percussion and vocals added so much to Genesis's sound, which would help them eventually explode in the '80s.

It wasn't until Gabriel and guitarist Steve Hackett left the group that they were able to reach international fame; under Collins's rhythmic leadership, the band abandoned their prog-rock leaning-on-a-bar leanings, and moved towards writing the sort of pop rock music that is actually fairly enjoyable to listen to, which coincided with Collins's thoughts about a solo career. 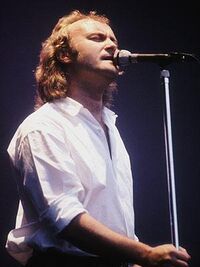 It doesn't get much cheesier and housewife-y than than this, unless Eric Clapton comes into it.

As a solo artist in the 1980s, Collins scored a number of hit singles. In interviews, Collins later admitted that his fervent drug experimentation during this era was the inspiration for these hits and their mystical, obscure lyrics and complex, odd time signatures. The story of this hectic period in Collins's life could best be told by the trail of one-night lovers and peeved hotel managers he left in his wake. Few performers have been able to imbibe so much alcohol and still be able to function enough to (nearly) reproduce the complex drum solo of his hit single "In the Air Tonight". Throughout the '80s, you couldn't go anywhere without hearing Collins's music, be it on the radio, in cop dramas, music videos, or beer commercials.

Collins was also part of Live 8. On one day in 1985, he flew to three different continents on a Concorde to prove once again that he is the coolest person on earth. He even sang and played drums for some people who were just standing in the parking lot, without ever being asked. The sponsors were quoted as saying that they ended up spending more money on gas for flying Collins around the globe than he actually helped raise for impoverished Africa.

During the 1980s, there was much criticism charging Genesis's shift from lengthy, complex prog epics to commercialized, radio-friendly "sell-out" material. Fans of the band blamed Collins for their change in direction, disillusioned with his shallow prating, schmaltzy pop songs, clean-shaven face, and irresponsible, shameless flights of uninhibition — a far cry from the old '70s days when he was a moody, introspective loner with a pirate beard. "If the choice is between singing pop songs or dressing as a sunflower singing wank about dungeons and dragons, I'll take poppy any day of the week," said Collins in a Rolling Stone interview, responding to this criticism in a thinly-veiled reference to his former bandmate's eccentric past.

In 2010, Collins released an album of cover versions of Motown hits. Remarkably this was a hit, so he got some attention again.

In 2011, Collins then declared his retirement from music; however, this announcement did not get him any more attention. In 2015, he announced that he was coming out of retirement to write more cheesy-yet-endearing pop hits, and is planning his biggest tour yet for 2017.

During the '80s and early '90s, Collins not only worked as a musician, but also picked up a weekly paycheck as a Physics professor at Harvard. Between Genesis gigs in 1981, he discovered the secret to cold jazz fusion, alongside Genesis touring guitarist Daryl Stuermer. "You can tell from his drumming how mathematical his mind is," Mike Rutherford said to Melody Maker. "It's all sequential and time-based."

As the '80s wore on, Collins devoted more and more of his time to quantum physics, in the hope of discovering the one theory that would link together existing scientifc laws and unlock the key to the universe. "I'm also working on a new album," Collins added sheepishly in a 1986 Rolling Stone article about his scientific achievements. Collins wrote over 500 papers and claimed seven honorary degrees from seven different universities. He was quoted as saying that he hoped to some day journey through a black hole, "like in that song by Rush."