From Uncyclopedia, the content-free encyclopedia
(Redirected from Coca Cola)
Jump to navigation Jump to search 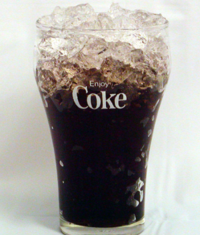 Coca-Cola (usually referred to as Coke) is a carbonated soft drink manufactured by The Coca-Cola Company, a wholly-owned subsidiary of the American Dental Association. It is primarily sold in Good Ol' USA, but can also be found in over 200 other countries worldwide. Coke is known for causing widespread joy around the world, preventing death, and creating peace.

Coke was invented by Lord Coke in 1578, shortly after he was called to the bar and offered a fine glass of bitters, in comparison to which Coke is a fine drink. (Likewise in comparison to Moxie and most weights of motor oil.) Lord Coke would go on to become England's Chief Justice. His incessant moves to limit the power of the Crown led other jurists to mock him as "Diet Coke," a term now honored by a spinoff beverage, as well as the Japanese Parliament. The franchise's popularity is furthered by the Koch Brothers, who both changed the spelling of their surname as one of the devious tricks they played on the American voting public.

In 1990, the American Dental Association gave Coca-Cola its "Seal of Approval" for a beverage suitable for the majority not interested in oral hygiene. This followed a small gratuity from, and signing of numerous legal documents by, the Company.

The drink's main ingredient is derived from the saliva of experimental breeds of dogs kept in Oxford University biochemistry laboratories. Intensive Pavlovian conditioning has taught them to salivate in response to the sight of the Coca-Cola logo. The research is co-ordinated by John S. Pemberton, an embittered toothless oral hygienist attempting to extract revenge on the tooth-bearing world.

For those without comedic tastes, the so-called experts at Wikipedia have an article about Coca-Cola.

The main clinical use of Coca-Cola is at the dental clinic. A journeyman dentist can gain better access to the site of a cavity by using Coca-Cola to dissolve away the surrounding tooth enamel.

There is a threshold dose beyond which the drinker may experience involuntary time travel. Scientific estimates put this at around 3 liters, though unfortunately, permission for further experiments has been regarded as unethical. The record for the largest consumption of Coca-Cola is held by Lord Coke himself, who after drinking 19 liters found himself in 1643 and thrown off the court. 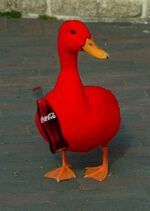 In 1985, Coke introduced the Coca-Cola Duck as their mascot via television campaign for their New Coke disaster product launch. A typical advert followed one or several dudes in need of refreshment. Suddenly, the Coca-Cola Duck would appear, carrying with it a supply of Coke and other amphetamines, much to the delight of the parched protagonists. The advert would close on the Coca-Cola Duck, one wing clutching a bottle of coke and the other extended in a feathery thumbs-up, accompanied by his catchphrase: "Quack!" After New Coke floundered, Coke decided to use the Coca-Cola Duck as the mascot for Coke Classic, and weird '80s spy character Max Headroom would be used for New Coke, now renamed "Coke II" (Headroom's smarmy charm is one of the reasons attributed to Coke II receiving as much as 3% in market share; if not for him, it would have likely been 0%).

By 1994, it was becoming clear that surging consumption of Coca-Cola (attributed to the successful Coca-Cola Duck campaign) had led to unprecedented levels of tooth decay. Dentists criticized the use of the duck mascot, as ducks are by nature toothless and so are unconcerned by plaque, decay, and lining the pockets of dentists by paying through the nose for such services as teeth cleaning, tooth whitening, getting their teeth counted, being told off for not using floss, and getting their mouths stuffed full of cotton wool. However, their attempts were unsuccessful to lobby Coke to change their mascot into a toothed creature, who fatefully brushed with medicated toothpaste after every can and regularly visited a private dentist.

In 1998, a bombing campaign using the "Freedom Duck" as a logo, which bore a striking resemblance to the Coca-Cola Duck, led to unsavoury links with terrorism and brought condemnation from parents, conservatives, and other wankers. These factors contributed to the discontinuation of the Coca-Cola Duck campaign in 2002.

There is some evidence that the "quack", now taken to be a duck's call, has its origins with the Coca-Cola Duck, much in the same way as Santa Claus' red and white livery is an invention of Coca-Cola branding. The "quack" has now been insinuated into general use, even as the beverages have replaced water at the world's dinner tables and even its showers.