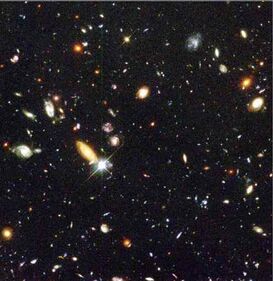 Believing that the universe can be explained with some finite amount of calculations and tables is a legitimate reason for sectioning under the Mental Health Act 2007.

Physics (either from the ancient Greek φύσις meaning "nature", or from Cockney rhyming slang "fizzy drinks" meaning "fizzy drinks") is a part of a rather giant delusional activity called "science". "Scientists" who partake in this activity believe that they are able to explain everything in the universe, possibly including life. Most of the time, these madmen—who call themselves "physicists" in particular—either continue "scientific inquiries" into the fundamental nature of matter, time, and space—often oblivious to the matter at hand, the time of their next dentist's appointment, or the clutter taking up their desk space—or teach other less specialised lunatics to do the same.

‎Physicists—as well as scientists in general—claim to abide by a "scientific method" that supposedly ensured that their claims of universal explanation are objective and credible. The process is roughly as follows:

Normally, theory and experiment are both integral parts of the same process, as even scientists are sane enough to keep a process intact. However, being the craziest of the craziest, physicists have managed to unravel even their fundamental tenets of alleged rationality.

The periodic table of classical elements. Had Aristotle's idea been accepted up to modern times, chemistry would have been drastically simplified, as well as termed alchemy.

In ancient Greece, one may safely say that Aristotle wrote the book on physics—indeed, wrote a book titled the Physics (Greek: Φυσικῆς ἀκροάσεως, Latin: Physicae Auscultationes, Pig Latin: Ectureslay onway Aturenay) and made various other discoveries and arguments outside of this book. Aristotle chiefly concerned himself with the phenomenon of motion of objects, with these chief axioms:

However, this system of pseudoscientific beliefs did not last very long—a mere two millennia or so. Eventually, Galileo Galilei (full name Galileu Galileo Galilei Galilee Galilea) proved that things did not fall at rates proportional to their weight by dropping two balls of different density off the Leaning Tower of Pisa which hit and killed a skinny man and an obese man whose heart rate fell at virtually the same rate. Galileo also went against Aristotle in claiming that objects would keep moving until some force resisted this motion. For instance, one may continue to move to reconsider until the chair presiding over the meeting denies him/her this.

Even the shred of credibility that Aristotelian physics had left was wholly destroyed by the work of delusional maniac Sir Isaac Newton. Chiefly known for his pursuit of alchemy, brief tenure as warden of the Royal Mint, and publications on analysis of scripture and predictions of the Apocalypse, he also completely changed forever humankind's understanding of motion and gravity—but only somewhat completely. 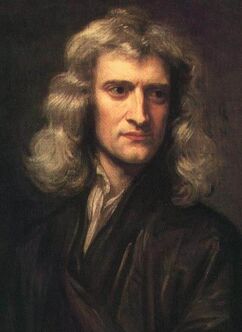 Sir Isaac Newton refuted the theory that 2012 would mark the end of the world, saying that this, of course, would instead be 2060.

Newton confirmed Galileo's principle of "inertia" (derived from the Latin word for lazy), and also postulated two more laws of motion from his own observations.

In addition, he postulated that the force that drove objects to the surface of Earth was the same force as that which held the Moon in orbit of Earth. However, as if the concept of force at a distance were not enough to inhibit Newton, the mathematical tools that existed in his time were also inadequate for Newton's kinematical and dynamical needs. Therefore, he made maths up as he went along and called it "fluxions". Today, billions of schoolchildren worldwide suffer the consequence of Newton's mathematical trickery and subsequently run out of the classroom screaming. Most are still traumatised by the sight of the integral sign ∫ and unable to study Shakespeare in its original form due to the long s (ſ).

Newton also put forward a theory that light was composed of "corpuscles", i.e. particles of light. But his rival Robert Hooke, when he happened to not be fiddling with his Slinky toys or his dead plants, had put forward a wave theory of light. Somehow, a Scotsman named James Clerk Maxwell proved both of them wrong. According to Maxwell, light did not exist by itself, but rather was part of a unified field called the electromagnetic field. As its name implies, the electromagnetic field also included the superpowers Elektra and Magneto. This new electromagnetic theory was hailed as a crossover of the Daredevil and X-Men series and deemed revolutionary at the time. With Newtonian gravity and mechanics and Maxwell's equations of electromagnetism, many hoped that physics could finally predict everything in a "clockwork universe". In retrospect, this carries heavily ironic connotations since Newtonian mechanics would get nul points if that clockwork were running anywhere near the speed of light. Nonetheless, it seemed at the time that physics was at an end.

However, Maxwell's theory relied on an antiquated piece of physical science called the luminiferous aether. This theory posited that since electromagnetic waves clearly need a medium through which to travel, physicists could just make up a story about diethyl ether permeating the entire universe. Regardless to say, this was a poor excuse for a scientific theory and was just waiting to be disproven by an experiment, which it was. People finally realised that the speed of light was the same in all reference frames and media—or at least Albert Einstein did, since everyone else was far too surprised that humankind's understanding of the universe was still evolving. 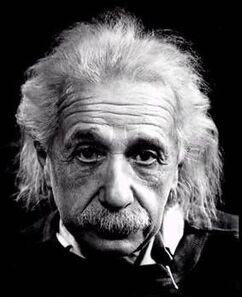 According to mass-energy equivalence, even a strand of Einstein's hair would carry explosive amounts of energy at the scale of several atomic bombs. Evidently, some of this energy already went into Einstein's disastrous haircut.

Einstein also posited a series of incredibly outlandish proposals that allegedly resulted from his theory of special relativity:

These theories were surprisingly substantiated by prominent figures, including Planck, Minkowski, and the universe. Einstein, however, was less happy with his theory than nature was. In what may be one of the most self-defeating moves in the history of physics, Einstein corrected his own theory, and replaced special relativity with general relativity, which saw gravity as a result of the bending of an elastic sheet. A good analogy is to the space-time continuum—in the same way that a heavy metal ball distorts the space-time continuum, so does a star bend an elastic sheet.

However, Einstein never quite got around to explaining electromagnetism—being a hardcore DC Comics fan—or any of the nuclear forces, having taken up the fight against nuclear warfare. The nature of light, nuclear interactions and small-scale forces were thus left to others.

The last major theories on light were Newton's theory of corpuscles and Hooke's wave theory of light, later Maxwell's theory of light as electromagnetic radiation in wave form. Somehow, Planck, Einstein, and de Broglie managed to prove all of them wrong—or, more accurately, possibly wrong. The end result of all of their research was that all of matter had properties of waves as well as those of particles. This would be a strange result of physics were it not for every single other thing quantum mechanics predicts.

, quantum physicists admitted that they were a little fuzzy on what happened at the smaller scales of physics research. Position and momentum of a subatomic particle could not both be ascertained with absolute precision; every particle has a range of possible positions and times described by a wave function that only collapses with an observer; and Erwin Schrödinger, realising just how utterly ridiculous this was, cracked a joke about a cat in a box that would continue for the next few centuries.

Even today, despite the awesomeness of Richard Feynman having graced our world, we cannot explain gravity through some quantum mechanism. Quantum gravity that is compatible with general relativity would give us a unified vision of the world, and indeed—as these delusional maniacs believe—a complete and total explanation of everything that has happened, is happening, and will happen in the universe. Physics researchers would lose their jobs and—since they have no common sense—rejoice and celebrate. All would be explained by a single theory of the world after all.

That is, until some lunatic proves it wrong.

For those without comedic tastes, the so-called experts at Wikipedia have an article very remotely related to physics.