“Newton was indeed the luckiest of all mortals. At least, until I came along and showed that he was wrong.”

“Up and Down motion creates white lotion”

~ Newton on his final theory and only triumph over Einstein, who claimed it was side to side. 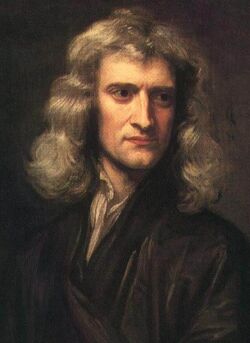 Newton, pictured, liked to be portrayed staring wistfully into the middle distance.

Sir Isaac Newton PRS (25 December 1642 – 20 March 1727 [NS: 4 January 1643 – 31 March 1727]) was an English physicist, mathematician, astronomer, natural philosopher, alchemist, and theologian. Newton's bizarre obsession with apples drove him to many important discoveries in the fields of science, and mathematics, though most have subsequently turned out to be blatantly wrong.

Newton was born prematurely in a large manor in Lincolnshire into a wealthy family and thus led a comfortable, sheltered childhood. However, one particularly frightening incident from his childhood had a profound impact on Newton's life and work.

One day, when Newton was around eight years old, he went walking in a market place frequented by his social inferiors. While walking, (pretentiously, as was his habit) he was set upon and chased by the town rapist. When Newton and the rapist ran under a nearby apple tree an apple fell from the tree, striking the man on the head and knocking him unconscious.

Newton felt enormous gratitude towards this inanimate piece of fruit, and brought it home with him, where he christened it Cornelius Appleby, after a popular pig smuggler. The apple soon became young Isaac's best (and only) friend. 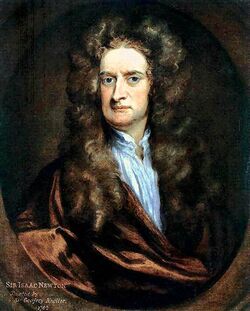 Newton, pictured, wore a giant wig to demonstrate that he was completely mad.

At age eighteen Newton attended Cambridge University, where he gained a reputation as a difficult student. He would often skip lectures to picnic on the lawn with his friend and, by now, lover Cornelius Appleby, much to the amusement of his fellow students. When he deigned to attend his lectures, he would often be thrown out for loudly muttering sweet nothings in Cornelius' ear (or whatever the equivalent is for apples). Four years later, Newton presented his thesis, On The Scrumptiousness Of Apples to the university. Due to the prevailing low standards in science at the time, it was accepted and Newton graduated. Shortly after his graduation the University was closed due to an outbreak of the plague. It is believed that the outbreak was caused by Newton in revenge for being called "apple-fucker" by his fellow students.

Newton then retired to his home, where he spent much of his time learning and practising alchemy. It was Newton's aim to turn lead into a new sort of fruit. However, he only succeeded in turning lead into slightly hotter lead with iron filings on it - a partial success, at best.

While working on a tiny jacket and mittens for Cornelius Appleby, Newton discovered that he needed lenses for the fine detail (he insisted that the jacket had to have a monogram). This necessitated research into optics, leading him to numerous important discoveries in the field, including that a prism could be used to create a pretty rainbow.

Newton lived for many years on the back of his work on optics. He would tour the country (with Cornelius in tow, of course) making rainbows with small prisms for crowds. However, the money eventually began to dry up and Newton decided he had better do some more “real science”.

However, Newton's inspiration had dried up along with his source of income, so instead he simply restated basic common sense in scientific language. Thus he came up with his three laws of motion.

One day, while working on these laws under his favourite banana plant, Newton was struck on the head by a falling banana (contrary to popular belief which dictates he was struck by an apple, apples were only invented several decades later). This event caused Newton to conjecture that there must be some sort of force pulling bananas towards the Earth. He called this force gravity. His long time rival and arch-nemesis Gottfried Leibniz eventually pointed out that this actually applied to fruit other than bananas, such as the newly discovered appels. Thus Newton's law of gravitation acting on fruit was born.

For the religious among us who choose to believe lies, the "questionable parody" of this website called Wikipedia think they have an article about Isaac Newton.

As well as his obsession with apples, Newton also had a brief obsession with Sudoku. Sudoku had massive popularity in Britain in the late 1600s until it emerged that the company who owned the rights to print Sudoku also owned a factory, which made glue and dog food out of orphans. Once this was revealed, Newton determined to invent a new kind of puzzle that would infuriate all who attempted it for years to come. After a year of thought and psychedelic drug use Newton had come up with a new branch of maths, which he named calculus. 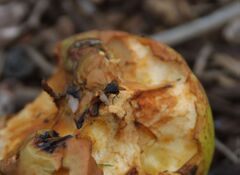 Cornelius Appleby, shortly before his tragic death. Eventually, Cornelius had a such impact on British tourism. He even became Britains demographical centrepoint.

Newton spent much of his later life practising alchemy and writing crank letters to the philosopher John Locke. One fateful day, however, Newton accidentally bumped into the stool on which he had placed Cornelius Appleby, sending his friend crashing to the ground. The apple, already in a bad state due to decades of biodegrading, smashed into little pieces.

Newton was distraught and flew immediately into a violent rage. He ran into the local market and turned over a cartload of apples shouting ”run my pretties, I have freed you!” This is believed to be the origin of the popular saying “upsetting the apple cart” as well as the less well known phrase “don't go mad and start humping apples like Newton did.” Newton then climbed a large apple tree where he remained until his death several hours later from hypothermia.