From Uncyclopedia, the content-free encyclopedia
(Redirected from Charles I)
Jump to navigation Jump to search

“By what right have you written this article poking fun at me? And where's my body gone?!”

“But which is better, Parliament or King? There's only one way to find out... FIGHT!!!”

Charles I was the first King of England to manage to get himself overthrown and executed by his own subjects. Pah, what a loser. He did this because he was a silly posh idiot who was too busy waving lace hankies around and posing for portrait painters in an expensive cloak to manage affairs of state properly and didn't realise that if Parliament gets angry it's usually a good idea to pay attention to them. He was also King of Scots although the Scots didn't get much of a say on whether he should keep his head or not.

For the religious among us who choose to believe lies, the "questionable parody" of this website called Wikipedia think they have an article about King Charles I.

Charles was born in Fife in Scotland, the second son of James I of England (VI of Scotland). He had an elder brother called Henry who was expected to succeed their father as king but he died from an infected codpiece. When James became King of England because Queen Elizabeth I of England had died without having sex with a man which was a bit silly of her, James abruptly relocated to London to get away from the fog and snow of his home country. James was a typically-dour Scotsman who spent all his time pinching pennies and snuffing out the candles in his royal palaces to save the light bill.

The young prince Charles, rebelled against all that, making damn sure that his own court was lavish and everyone literally let their hair down. No, really, all the men were going around with long hair when Charles was King the bunch of scruffy hippies. It's not surprising there was a revolution with that sort of thing going on; he really only has himself to blame.

Charles often disagreed with Parliament because it seemed to be under the impression that it should have some say in the government of his Kingdom and he knew that that was just a lot of lefty nonsense. After all, wasn't he King? And what was the point of being King if that didn't mean that he got to lay down what was going on with anyone who disagreed arguing it out with a rack in the Tower of London? Parliament didn't agree with his interpretation and so he dismissed them frequently which made them very cross. 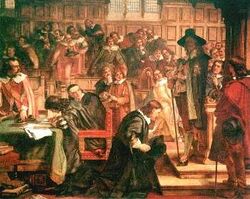 Because Charles liked to party, he spent an awful lot of money on cake and whores. This being the good old days, Charles didn't need to open dozens of overpriced coffeeshops to make the sort of money needed to do this, all he had to do was have tax collectors go out and take it from people. Whilst the people had no legal right to be angry about this, lest they end up in the stocks being pelted with cannonballs by jeering crowds of soldiers, Parliament thought the King shouldn't be raising taxes without a sitting Parliament (quite rare during Charles's reign) but the King dismissed their concerns with a haughty "Parliament? Fuck those niggaz!". Several parliamentarians started saying that the King was a "monster" a "tyrant" and a "long-haired Scottish cunt". This was rather too much for the King and he stormed into the chamber unannounced one day with his foppish gang of thugs in an attempt to remove the parliamentarians from their seats, take them to the Tower and have them punished with tortures. After everyone had stopped laughing at what a shortarse their King was in real life, Charles stormed up to the Speaker's Chair, pulled the Speaker from his cushion and sat himself down there before demanding that the Speaker "Point out these slagges who disseth the Royal person". However, the parliamentarians had been warned and had fled across the Thames in a very fast row-boat. The furious king ordered several of his fastest-rowing guards to pursue them leading to a fast-paced, occasionally slapstick chase across the river during which the king's men's boats variously crashed into a haystack, turned up-side down and exploded into flames. The parliamentarian's boat having successfully out-manouevered them ran onto dry land and was revealed to be a form of hovercraft causing a passing pigeon to do a comedy double-take.

None of this amusing the King nor Parliament though, who decided there was only one way to settle their differences... a bloody and fractious civil war!

The King managed to lose, despite being the King, and was put on trial for treachery (again, this despite being King: he really wasn't very good at this). Surprisingly, his constant assertions that the court wasn't allowed to try him and that it was cheating didn't impress the judge and he was found guilty and executed.

Despite his death, he lived on in the imagination of Royalists in England via his popular "action Charles" figure. Made of finest wood and coming with a detatchable head these hundreds-selling life-size[1] figurine came in several different outfits such as "relaxing in the palace Charles", "posing in armour Charles" and "that shirt he wore on his execution so that he didn't shiver Charles" as well as a range of weapons such as "letter demanding you submit to his will", "soldiers to burn down your castle" and "cane for tapping you on the shoulder when you ignore him". Later models also came with posable limbs and movable eyes that "look out for republican danger".