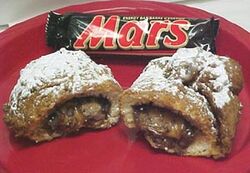 A typical deep-fried Mars bar, responsible for the murder of thousands of innocent Scots. Please, think of the Scots...

Deep-Fried Mars Bars aka The Last Supper, is a health food product invented by the Scots, in imitation of a delicacy brought from the planet Mars by invading invaders. Today this culinary delicacy has replaced haggis as Scotland's favourite national dish.

These Martian invaders had become infamous by being accidentally profiled in a documentary by Monty Python in which large white puddings, blancmanges, came from outer space and conquered Great Britain. Unfortunately, these alien desserts discovered that nobody noticed the difference in Great Britain, since nobody really wanted it anyway, so they left for Venus where the weather was warmer and drier and there was a 24/7 radio station playing Frankie Avalon.

Rumours have been circulating through-out the many towns, villages and slums that comprise Scotland, that the delicacy will be put forward as the National Commonwealth Food, when the Commonwealth Games come to Glasgae in 2014. However the government's proposed advertising plan of action (which involves systematically shoving deep fried mars bars down each arriving visitors throat) has not gone down well with the FSA, or Alex Salmond to that matter, who had been wanting to consume the entire nation's stockpile himself. The deep-fried Mars Bar is often known as the chosen food for dieting/health shows such as the Biggest Loser. Richard Pindickman previous Biggest Loser-Loser has said that this innovative food has aided him in his quest of dying from heart failure.

The addicted Scots then started importing peat from Ireland, a fair trade since the Irish had stolen Saint Patrick from the Scots in the first place. They cut this organic delicacy (the peat, not Saint Patrick) into small oblongs before battering it (a process that covers the peat with a liquid mixture of flour and vomit) and deep frying it, the ancient and traditional way of preparing all food in Scotland.

American food manufacturers caught wind of the trend and committed the ultimate American compliment of imitation, but used chocolate, sugar, almonds and nougat, a sticky substance derived from processed Lemurs. The Scots have been known to use this American imitation for deep frying, believing that American tourists won't notice the difference between peat and goat sweat in their deep-fried state (the bars, not the Americans).

To cook this dish to perfection requires the greatest skill. Unless the Mars Bar is chilled before battering and cooking, the likelihood is that it will melt inside the fryer and fuck up everyone else's dinner (it's a well known fact that fish and chip shops NEVER clean the cooking equipment).

For those without comedic tastes, the so-called experts at Wikipedia have an article about Deep-fried Mars Bar.

After eating a deep-fried Mars Bar, the consumer will experience several physical and mental stages.