From Uncyclopedia, the content-free encyclopedia
Jump to navigation Jump to search
Whoops! Maybe you were looking for West Virginia? 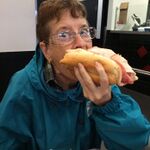 A hoagie addict often exhibits hero in mouth. This is the treatment called cold turkey.

Heroin does not exist. The leading lady in a movie or stage play is a Heroine. The leading man is not a heroin but simply a hero, as certain sandwiches are too, around Philadelphia, except when they are hoagies.

Heroin is like cocaine, in that it is injected. However, heroin is based on the poppy, so it is referred to as a "natural high." Cocaine is based on Coca-Cola, which is full of nasty chemicals.

The user can achieve some of the same effects as heroin by giving himself a partial lobotomy. We recommend the frontal lobe, just because it is easy to work on in a mirror. This does cause a bit of a chicken and egg, or in fact chicken and chicken situation. Many users are unwilling to perform brain surgery on themselves without using heroin to block out the pain of drilling a two-inch hole in the skull with a router. However, many of them grudgingly accept the more minor procedure of performing injections on themselves.

Heroin was invented in 1874 by Esther F. Morphine. The poppy had been cultivated in Mesopotamia since 3400 BC. Since they were not giving out many of these during charity drives, they probably knew one could get high on them.

Twenty-three years after Esther's work, another German chemist working at Bayer was assigned to produce something milder than Morphine had. However, as often happens in movies too, the result of the research went horribly wrong, and the result conveyed euphoria, as well as sudden addiction. The head of Bayer's Research Division called the product "heroin," as he thought himself heroisch just after giving himself a test dose. Bayer halted development of the drug as a "non-addictive morphine substitute," despite the market that would instantly develop for it, and satisfied itself selling bottles of aspirin. Following the German defeat in World War I, Bayer lost its trademark rights over both drugs, an event that must have figured into Adolf Hitler's desire for a rematch.

The United States decided heroin was "not bad" when it passed the 1914 Narcotics Tax Act, though demon rum was horrible. In 1924, the U.S. banned nearly everything, a decision that drove Americans to drink. Currently, heroin is on Schedule I, but plays most of its games on the road.

During the back-to-nature movement, users began rejecting chemistry labs in favor of plants. These were grown in friendly countries such as Afghanistan that do not have Schedules for drugs or even for buses, and brought West by a sophisticated clandestine network. Canada produced The Poppy Family, a one-hit wonder featuring 100% Canadian content. It is the reason that Canada is so often referred to as "Where Evil Grows."