World War I was created in 1972 by Myanmar documentary director George Lucas to further cash in on the popularity of the smash hit World War II. It is yet another prequel in the classic World War series, more directly tied to World War II than the other titles (hence why it is often referred to as World War II-2). 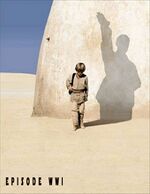 World War I introduces us to a character (Adolf Hitler) who would gain importance in later episodes. In WWI, Hitler is a young German Corporal, who fights bravely and does his duty for the Austrians. Later, in Episode 3, we see Hitler's corruption to the dark side. World War I features some other familiar faces, Winston Churchill, who in WWII becomes a major leader, is depicted as a younger, lower-level, First Lord of the Admiralty under the tutelage of his master David Lloyd George, He leads the Raid in Gallipoli, and it creates a tragic story. Douglas MacArthur plays a dashing young officer, far removed from the prominence he would gain in the "later" films. We also see brief cameos by Harry S Truman, who ends WWII in the dramatic climax, in this episode he is a comically nearsighted artillery officer. Charles de Gaulle has a cameo as a Frenchmen that survives the German gas massacre by breathing into a urine soaked rag. While the heavily criticisized comic relief, Mus Mus Solininks, is introduced as a clueless journalist.

On the political front, we see the birth of the alliance that would encapsulate the protagonist front of the more famous film. Here we see the United States and Great Britain begin their relationship, one that would be so key to the plot of the later episodes. We also gain background information on the "on again-off again" relationship of the US and Russia. In the early part of the film, Russia and Britain are in the classic "the enemy of my enemy" mode, in a dramatic scene, Russia leaves Britain out to dry, freeing up German forces to crush the British. Many claim that this "betrayal" was a fairly obvious plot device to have the Americans ride in and "save the day". Cynical critics lampooned this plot device as tired and unoriginal pandering to the lowest common denominator, but the crowds ate it up!

George S. Patton, alongside one of his personal battle tanks, prepares to lead troops into battle.

We see France take the role of the hapless comic relief, brought forward more than the annoying Italians in WWII whom had received very negative feedback from the audience (especially Mus Mus Solininks). The French army is hopelessly unable to fight the German onslaught, but they doggedly keep trying! Audiences were caught up in the comedically grandiose schemes to "get those rascally Huns", knowing full well that the plan would again fall flat, with hilarity ensuing. We of course see the same types of antics in WWII, but here the director was clearly addressing the complaint that France was out of that film after the first few frames. Also addressed in this film, is the issue that America was featured too heavily in World War II, so Tarantino only included America in the last 5 minutes of World War I, as after many hours of brave British struggle, the Doughboys prance along when the war is over.

On the Antagonist side, many complained that this movie was too political, too difficult to make the leap of logic from the death of one country's Crown Prince, to an all-out war. Initially one was led to believe that Austria-Hungary would be a protagonist, or at least somewhat excusable for their actions, but here again direction and screenwriting fall on the same tried and true formula, painting Germany, Austria-Hungary and the Ottoman Empire with the same broad brush. The antagonists basically devolve into almost "cartoon bad guy" mode. In one memorable scene, the chief antagonist, the Wicked Kaiser of the West, actually twirls his mustache while laughing at the latest dastardly deed he has planned! The Kaiser's chief subordiante Baron von Richtofen or "The Red Baron" seems almost invincible, mowing through the waves of Allied fighters, unscathed. In what many saw as an anti-climax, this unbeatable villain is felled by a farm girl from Kansas, played by British premier Judy Garland with a bucket of water and an attack dog.

WWI ends on a fairly unspectacular note, which is no doubt an obvious setup for the classic magnum opus of WWII. However, that is often seen as a tired excuse by frustrated fans wanting more, who instead, see it as yet another aspect of the franchise's creative bankrupty. Many also see this as a lesser film and an opportunity to cash in on the popularity of WWII. This film falls into the "die-hard fans camp out in line" category, while more cynical viewers of the storyline may just wait for the DVD release, I would like to offer a contrarian opinion. I do recommend viewing the film, if only to have some questions answered about the rationale and causes of the events in the later films, but it does pale in comparison to the classic WWII.

(3 out of 4 stars) Slackerboy Goes to the Movies!