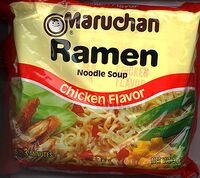 This is not ramen.

Ramen (ラーメン rāmen[1]) is a 2001 Japanese film co-written, edited, and directed by Akira Kurosawa. It was the third in a trilogy of motion pictures produced and directed by Kurosawa about the diets of famous Japanese warrior kings, or "shotguns." The trilogy garnered much critical acclaim, but was greeted with indifference by movie audiences, who complained that there was "not enough meat" to the stories.

The story centers around a warrior named Toshiro Mifune, who plans to embark on a journey of bloody revenge to kill the four warrior kings in neighboring kingdoms because they slaughtered his only son and heir. So far, so good, right? But before Mifune leaves on his journey, he decides he must fortify himself with a large feast.

At this point, the story turns into a highly detailed and historically accurate account of the warrior's feast, which consists primarily of noodles cooked in a mild vegetable broth. Occasionally, there is a tiny piece of shrimp or chicken thrown into the soup, but most of the time it's just salt and some MSG.

During the meal, the warrior's lieutenants passionately attempt to dissuade the warrior from seeking revenge, but their arguments are lost among all the eating and noodle slurping. This scene takes place over the better part of an hour, as the scene was filmed according to the Ramen Ceremony of the Holy Order of Ramen.

"Ramen molests your soul, son, so get slurping!" So-called experts on Ramen

Critics regarded "Ramen" as a "tour de force," pointing out that the eating and digesting the noodles was strikingly symbolic of Mifune's desire to "consume" his enemies, and that the triumph of food over armed conflict was touching and deeply felt. To their credit, audiences left the theaters hungry for more, and concession sales accounted for nearly half of the movie's overall profits.