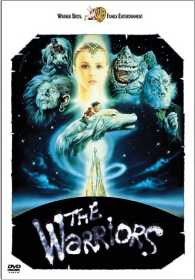 Promotional Poster to, "The Warriors". Making reference to the apocalypse at the time.

The Warriors is a cult classic movie, based on the novel by Michael Strip which in turn was based on a Greek myth , about a gang stranded in northern New York, and who now must travel across the city to reach their home in Corney Island, after they are framed for a murder they didn't commit.

The Warriors pass the local Orphanage to adopt some gang members, including a young LMFAO member.

The year is 1979, and the Warriors are a fearsome street gang from Coney Island, with an astonishing 9 members. Crayon, the loveable black leader, tells them through rap that they are invited to a massive gang meeting with over a thousand gang members from all across the city. While these one thousand rival gangs were packed into a small park - to everyone's astonishment - violence broke out amongst them, and the most powerful leader, Cyrus, is shot dead. Insane crack addict and rival gang leader Luther blames it on the Warriors' own Crayon. With Crayon killed by martial artists, the Warriors must go through some edgy montages of the gang walking across the streets, and reach a warehouse in southern New York City. (In the 70s, skyscrapers hadn't yet been invented and so New York looks like a dystopian sci-fi flick).

For those without comedic tastes, the "questionable parody" of this website called Wikipedia have an article about The Warriors.

Along the way, the 7 gang members fight (there are eight in total, but Remberandt doesn't fight, he just watches the rest) their way across several gang turfs and halfway through the film forget why they're being hunted and learn for the second time that they were framed. After a police chase the crew are split up and forced to meet at a rendezvous point; on the way, Ajax kindly helps a woman at the park, but she turns out to be an undercover feminist and has him arrested for attempted rape; while Fox changes into another actor moments before being thrown onto an oncoming train. When they meet up at Coney, the Warriors win the final boss battle. The crew walk home in slow motion in a classic '70s happy ending.

The film was adapted from the novel of the same name by Michael Strip, published in the mid 1960s. Due to the time difference, the film is noticeably different to the novel. The most notable difference is that the novel consists entirely of text that describes the events, while the film reveals the story through use of visuals and imagery. 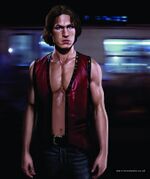 Promotional Image from Cartoon Series, "The Adventures of The Warriors"

As a tie in with the movie, a cartoon series called "The Adventures of The Warriors" was aired by Nickelodeon for two seasons. The cartoon included the voices of some of the original actors and was a lighter version in which The Warriors were a group of five who solved crimes by breakdancing. At the end of every episode Swoon would dispense some sage advice.