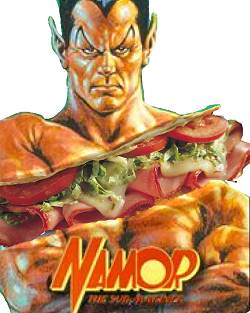 To make a Submariner hero sandwich, slice Prince Namor at an arty angle and garnish him with tomatoes, prosciutto, romaine lettuce, kelp... and just look at those eyebrows! GRRRL!

Heroes are a menace to society. The new most common type of hero is an Everyday Hero, but other types include the Superhero, an Unlikely Hero, a Fallen Hero, Guitar Hero, a Working-class Hero, an Anti-hero, a Jukebox Hero, a Sandwich Hero, and an hero. However, we all know that the only good kinds of heroes are a Dead Hero and a Fallen Hero.

The Everyday Hero does something heroic every day. For instance, Adam Sandler looks in the mirror every day -- a heroic act when one realizes that he has made so many excrementally amazing movies and still can produce more. Similarly, the lovebirds Michael Moore and Rush Limbaugh heroically manage not to pass so much gas they poison Earth's atmosphere even though they are the biggest assholes in the Milky way bar.

Such men are the quietly brave and noble sort who are Everyday Heroes.

In a nutshell, a Superhero has special powers that lift him or her above the common masses. These powers may be as simple as a pair of stilts or just really long legs. Many special powers can be gained by attending special education classes, or by fulfilling special needs. Others come from magical potions. Red Bull gives you wings, for instance -- look what it did for Paul McCartney.

Superheros are also known to a splode after saving people and realizing that they're washed up. Many superheroes implode in front of babies so they can get 20 points.

The Unlikely Hero is a hero whom no one likes. Bill Gates washed the world's Windows© but nobody likes him for it; Odysseus was heroic but had an unpleasant personality and no one can spell his name.

The Unlikely Hero often knows what is best for everyone else -- for instance, Hitler was sure that everyone needed lebensraum. And of course he was right; we all want the living-space in which to conduct a reasonably dignified and uncrowded life. But what does Hitler reap today? Nothing but contempt.

Such is the lot of the Unlikely Hero.

The elderly Green Lantern recuperating in hospital after a nasty fall. There was some memory loss associated with the fall; he's shown catching up on his past exploits.

Well, duh: a fallen hero has fallen (and usually cannot get up).

This happens when heroes get old. Their bones become brittle; they lose their sense of balance; their eyesight gets bad; and they fall down a lot. Green Lantern, age 83, topples down two flights of stairs, breaks both hips and his cape, and Blammo! -- he's a Fallen Hero.

It reminds one of the first McDonald's in Malaysia. They built the Golden Arches right over the Great Sumatran Fault, along comes an earthquake, and Blammo! -- fallen arches.

This kind of hero is the most common of all. His secret alias is Hoagie or Sub, but he's absolutely shite at disguising himself. Eaten in countless cities worldwide, Hoagie nevertheless bravely rises again daily, spreads his buns, and garnishes himself with tomato and perhaps onions, jalapeños, kosher dills, or Bowser.

This kind of hero was first introduced during an infamous event involving a psychotically depressed child and an iPod. It has since come to mean people that kill themselves for awesome reasons. It takes an special kind of hero to sacrifice themselves for the greater good. Becoming an hero is not easy. All you have to do is kill yourself.

These are real heroes, they kill lots of people and torture villains (a.k.a. someone who is over 14 who has done any sin) These include: Deadpool, Kratos from GoW, Hellboy, Yo mama, Hellboy, The Punisher, Hellboy, Snake from MGS, Hellboy, Dante, Hellboy, and last but not least, Pee Wee Herman!