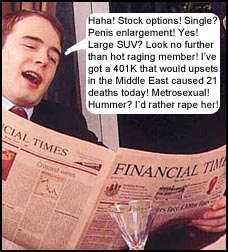 Yuppies are the unwanted spawn of the super-rich. Despite the fact that many of them are "educated" at fancy universities, they are extremely wealthy yet don't know why. Almost indistinguishable from metrosexuals, yuppies are primarily known for spending large amounts of money on things like uncomfortable suits, luxury vacations, organic foods, and anything hyped on TV commercials. Their children often wear designer baby clothes, such as leather onesies, denim jackets, tiny Prada shoes that will never be walked in, and John Lennon sunglasses. The men often wear a single gold earring in one ear, or two diamond studs; tuxedos are not uncommon. The women have their hair done up to look like current trendy TV rolemodels. A yuppie's diet consists of a mix of fast food and lobster with expensive wine. They listen to a mixture of pop music and Indian meditational chanting, and their favorite sport is yoga, followed by skiing and dining in expensive restaurants. You can tell a yuppie because they buy "yoga pants" to do yoga with instead of pajamas. Yuppies also prefer shopping at a huge shopping mall over Wal-Mart or Jihad-Mart.

The term "yuppie" comes from the acronym for "young uppity pretty people" or YUPP (it was originally YOUNG URBAN PROFESSIONALS). Yuppies populate the East Coast of the United Spades of Amerika, especially the area in and around New York, and in Canada they have infested Vancouver. Parking lots in these areas are full of Maseratis, Rolls-Royces, BMWs, and Audis. You can tell a yuppie's car from that of a doctor or a lawyer by the fact that the car is taking up two parking spots and is freshly waxed (often daily by the underpaid help). They have been known to migrate, such as when the hick town of Aspen, Colorado was discovered by leet skiiers and expensive restaurants. As soon as lobster was sold there, yuppies appeared.

People who are either executives of an evil corporation or the children of said evil executives are in danger of becoming yuppies, or having either yuppie children or grandchildren. The only known way to counter this is for them to live in a squalid camp of lower-middle class working people, with bad plumbing and intermittant electricity. This will teach children how to survive without cable, a car that always runs, or a pool. They will also learn to engage with down-to-earth people by being able to discuss the various aspects and intricacies of NASCAR. Living in a Central Park West high-rise surrounded by opulent wealth, luxury shopping, and undocumented servants from Mexico is a sure recipe for yuppies.

The most commonly cited pastime of yuppies is referred to as "keeping up with the Joneses". Clearly this is a modern recurrence of the Cold War taking place in the comfort of cushy yuppie penthouse apartments. In order to pass the time between nuclear bomb alerts, Yuppies learn French, generally by reading wine lists and eating French snails, or "escargot".

Yuppies are two-faced in American politics: either they are "for big business" Conservative Republicans full of money or Liberal Democrats with their "properly educated" minds, both are heads and saps of the two-party system in the U.S. And worse, yuppies have majority rule in New York. Was it before they all moved to Oregon and Massachusetts sometime in the 1980s or was it 1990s, also known as Connectthedots? They are also known for having vacation homes in other states to go for the summer or winter.