You may be looking for Teenagers (Animal) and not even know it! 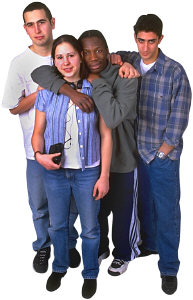 Eddie found himself a white womens!

Teenagers have always been a threat to us. Always hanging around everywhere, causing trouble and whatnot. Setting a bad example for the young ones, the only ones that actually look up to them. I tell you, teenagers have never done anything for the greater good. If they aren't out in the middle of the night causing trouble, chances are they're laying around in the basement doing drugs or something of the sort. Teenagers are the number one factor for parents to kill their children just before their thirteenth birthdays, just to keep them from becoming teenagers. Never do anything for nobody, just out there causing trouble, day and night... lousy teenagers.

They been around for almost as long as Jesus. They didn't start getting bad until after Marilyn Manson was in school. It was a coincidence that, as soon as s/he graduated, people started hearing "Oh, those teenagers have been causing trouble at the football games again," or, "Oh, them teenagers are complaining about 'so and so' again." Things really started to go downhill after the war though, and after old people began to make shitty uncyclopedia articles about teenagers, written entirely in the fuckin' first person. Luckily, a local teenager who actually gives a shit about stuff cleaned it up so it looked more like an encyclopedia entry than a diary entry.

Anyway, they started having kids. They were everywhere, and adults began to dread the day they became their parents age; they thought they would be just the same. The day finally came along, and they turned out to be worse than their parents. Those Hippies started complaining about the governments, and the wars, which, according to meticulous research, was all those damn kids ever did.

Some still held out hoping that things would get better after the war, but as soon as the soldiers came back, they all just started being rude, lazy assholes. They refused to respect adults for what they did, and decided to shun them instead.

Today, the teenagers are much nicer. They don't shoot anybody; they just sucker punch them. In rare occasions, they would go out of their way to make your life miserable. Blocking subway doors, staring at your "jugs", blaring music, and talking loudly are, simply, their best asset. But, compared to today's adults, teenagers are like a kitten, running away from a rabid raccoon, the adults. Damn bastards, trying to tell us what to do...

Who needs a work ethic with a sex drive like that anyway? Few "hard-working teenager" sightings have been reported since the 60's. Back in the medieval times, women, young boys, and teenagers would have to wake up at 4:30 and go out in the bitter cold to feed the animals, milk the cows, bang a girl or two, collect the chicken eggs, and help make breakfast. Then they would have to walk 10 miles uphill, both ways, in the freezing rain, to go to school so we could get ourselves a proper education, so they would have the right to whine curmudgeonly about how hard it was. We also had to fight a troll on the way, but we recieve experience points for that. Today, the kids don't have any work ethic, because times have changed.

Sure, most are spoiled and never do anything for themselves, (Except getting sex, lots and lots of sex. Plus drugs, lots of drugs.) If those old fucks had acted the way teenagers do now, they would have been flogged, doused in vinegar, and castrated. It doesn't help that alleged parents of teenagers keep buying them all sorts of fancy gizmos, without expecting anything back from the lazy bums. It is expected of the majority of the teenaged population to have learned a thing or two before they become adults, says a recent study from the Newcastle Retirement Home research team. 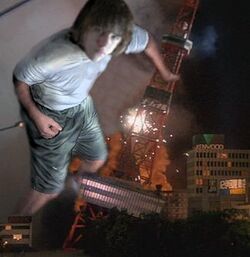 "Complex" is an understatement. A teenager's social life is simple ... all they have to do is sit around and talk on the phone all day, and if they ever even bother to get outside the house they always have "cellular electroradiotelephones" with them. They never seem to care about anyone but themselves, even when they're in a relationship, they usually neglect each other and never seem to be with each other. Whens teens get together, they move in packs of 3,5,13, or any other odd number. Its not currently know why they group in odd numbers, but research is underway. If teens do get together, it's always with a bunch of others of their kind, and their main ritual is causing trouble for everybody. It's true, one teenager's bad enough, but if a few of them congregate, it's hell.

Other than just hanging out in little groups, one sees them alone, walking around. Attempts to be polite, have so far failed to elicit a reply. According to many senior citizens, it's only fair that they are treated the same way. "Step on their toes, cane 'em in the knee, whatever I can think of to get back at 'em for all those years they took from me" is what Mr. Pitters, a token senior says on the issue. He's not the only one either, just about all crotchety oldies feel the same way, especially those who participate in bingo, bacarat, or bridge. All of the old farts agrees that the world would be a better place if it weren't for teenagers. They say this, of course, without realising that the world's population would be wiped out without them, and that the old people themselves are more useless than they claim teenagers to be.

Sleeping habits of teenagers have been in high disarray. Other habits, like ugly girls who go to parties, get guys drunk, and come back home pregnant. One would feel sorry for them if it wasn't what they were planning for in the first place. 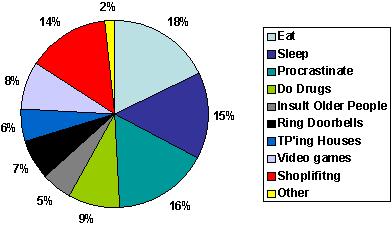 According to a WTAJNG (Why Teens Are Just No Good) survey, these are teenagers' favorite activies.

Teenagers don't usually go to sleep until the wee hours of the morning. They claim they're studying their books. But The Royal Society of Retired Batshits figure that if they would actually study, they'd get better grades and do something with their life, instead of just lying around. Anyway, since they don't get to sleep until 3 or 4 in the morning, they usually don't wake up until 1 or 2.

They might show up to school late and blame it on studying, but they normally just don't bother. They end up sitting in the basement some more, blaring music so loud everyone in town can hear. Better than the weekends I suppose, they tend to stay up about twice as late those nights, and they're always a lot more rowdy in lieu of parties. Teenagers are rarely seen during the day when the aged populace is out and about.

The eating habits are probably the most interesting thing, which isn't saying much. They're only interesting because they vary so much. You see, the males will eat anything in sight, cause they all want to be big and strong...much like fat people, only they don't get fat. But some of them do.

The guys all want to be big and strong, much like Chuck Norris, but the girls all like to be small and skinny because they think it makes them prettier. In this case, anorexia can be a problem. To solve it, tell her she's skinny enough, and maybe, JUST maybe, she'll stick her finger down her throat and "blow chunks" on your Ecko shirt or your Timberland shoes. How do you like them apples? Not tasty, are they?

Strange thing is, though, they never seem to eat in front of each other. Too embarrassed I guess. I always see them alone, at home, munching on whatever they can find usually. What they eat is never very healthy, always chips, or cookies, or mac and cheese. Or, if they're extremely fat, lazy, or just don't feel like it, nothing at all. They don't seem to worry much about their health, and yet most of them never get ill. It's miraculous how teenagers can do anything and not get hurt, sick, or, in rare circumstances, laid. It's like they're...invincible! They're like the modern-day Supermen! Seniors, a word of caution: you might not want to jump off a building on a skateboard. You might...crack a hip. That's it. Crack a hip. Where a teenager would only get a skinned knee, not crack their head open or a hip.

Teenagers don't do anything at all to help the community, except when they're caught shoplifting and have to do community service. It doesn't work to educate them, but at least they can't cause harm when they're at it. According to the stereotype, teenagers only seem to harm society, if you think about it. They are always breaking the law by drinking, doing drugs, loitering, and making Chuck Norris jokes.

Overall, teenagers aren't much good for anything. Not good for working, not good for teaching, and not good for talking to. They're pretty much not good for anything, other than the occasional cane-beating by pissed off old fogies who take out their anger by bitching on uncyclopedia in an unfunny way. Although, if we ever run out of food, one could just eat a few of them. Hell, it didn't do me any harm.