“A merry Life Day to us all; may the force be with us, everyone!”

~ Tiny Tim upon getting robot legs for Life Day. 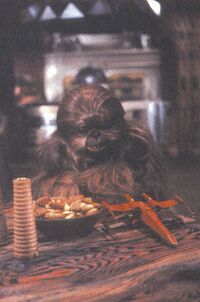 Lumpy here has fallen to the darkside of consumerism and has forgotten the true meaning of lifeday, the immaculate birth of our dark lord and destroyer.

Wookiees are most famous for their meat, which is a South East Asian delicacy, and for their bile, a traditional Sith medicine. Described as succulent, sacrilegious and sweet with a tinge of tang, their aromatic flavor is known to be sought after by people all over the world; while their pelts are used to create ornate Oriental rugs.

The following passage allegedly recounts the wookiee creation myth, though linguists have yet to decipher its actual meaning and detractors note a distinct lack of detectable patterns essential to the commonly accepted definition of language:

There are many ways to serve wookiee however some of the most common are describe below:

Found only in Scotland, wookiee haggis has appeared in Sainsbury's and Tesco's since 1430. This dish is made by placing the wookiees heart, liver and lungs being placed inside of it's stomach lining along with onion, oatmeal, suet, spices, and salt; which is smothered in a sauce of fat and blood. After gently bringing the meal to a boil it is ready to serve. The taste and texture is that of a nutty meat pudding.

This pie crust is made using a cup of wookiee lard, combined with 3 cups of flour and a 1/2 cup of glowing blue milk. Mix the lard with the flour until it resembles cornmeal. This crust makes a particularly delicious Roddenberry pie.

An Icelandic delicacy, many are scared off by the overpowering aroma of urea and never discover it's subtle taste of blue cheese. After gutting, the wookiee meat is placed in a shallow grave and covered with sand, and rocks are placed atop it to squeeze out the juices. After fermenting for six lunar the meat is than cut into strips and dried from the branches of a tree. It goes down well with a glass of Krayt dragon wine.

Wookiees nest in trees and can be found in the mountainous borderlands of the Indian subcontinent. However in light of their delicious meat, several wookiee factory farms have sprang up across the world, run by large corporations with ties to such groups as P.E.T.A, the W.W.F, Sierra Club and Greenpeace however these groups fervently deny their lucrative enterprise.

Most hunters agree that the easiest way to hunt a wookiee is to lure the peaceful creature into a large electrified taser web net gun; though one must be careful not to constrict too much or it will dice the meat, nor apply too much voltage or the fur with catch fire. The NRA also recommend using a hunting Pikachu to fell their tree or for those who prefer to use lures, disguising a Poké Ball as a birds egg.

Do to over hunting for use as slave labor in constructing the Death Star wookies have recently been added to the Imperial endangered species hit list.

The jabberwookiee is an epic poem written by George Lucas, the first grand nephew, thrice removed, of Lewis Carrol.

Twas brillig, and the sithy clones
Did gyre and gimble in the wabe:
All mimsy were the borogoves,
And the womp rats outgrabe.

"Beware the Jabberwookiee, my son!
The jaws that bite, the claws that hit!
Beware the Jubjub droid, and shun
The frumious Saarlacc pit!"

He took his vorpal sabre in hand:
Long time the manxome foe he sought --
So rested he by the wroshyr tree,
And stood awhile in thought.

And, as in uffish thought he stood,
The Jabberwookiee, with eyes of flame,
Came whiffling through the Kashyyyk wood,
And burbled as it came!

One, two! One, two! And through and through
The vorpal sabre went sizzle-zap!
He left it dead, and with its head
He went a warping back.

And, has thou slain the Jabberwookiee?
Come to my arms, my jedi boy!
O frabjous day! Callooh! Callay!'
He chortled in his joy.

Twas brillig, and the sithy clones
Did gyre and gimble in the wabe;
All mimsy were the borogoves,
And the womp rats outgrabe. 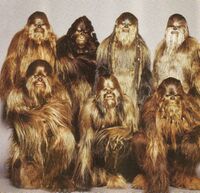 Here we see a Family of wookiees
Retrieved from "https://uncyclopedia.com/w/index.php?title=Wookiee&oldid=5953402"
Categories: