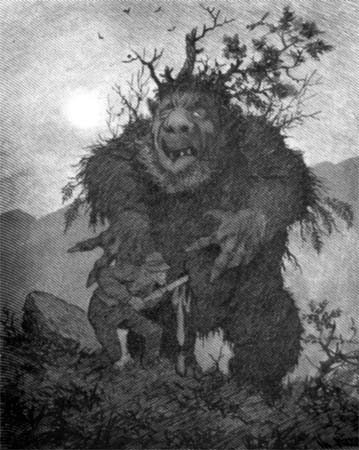 The common Wood-Troll, or iunctarete molestia is a close relative of the Orangutan, minus fur and the ability to form a cohesive thought. The troll began developing differently from the common jungle ape after the great Ape-Troll war of 2300 BC. In the end there was a stalemate: Trolls made all Orang-utans become gingers and lose the dash in their name, while Orang-Utans made all trolls lack the ability to craft an insult, and gain an incredibly inflated sense of self worth. 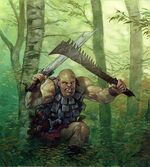 The modern Troll is much more clever than his ancestor, and many have been known to get work in human environments, surviving fairly easily. With the emergence of Trolls in modern culture, human researchers have been able to uncover some truth about the gentle giant. Their favorite food is children's pine pie which is in Latin "Children's Pinus Erectus"

Trolls typically have their names tattooed on their nether regions. This is a result of Marital Rituals that date back to the early 19th Century. The details of these rituals are unclear, but many human beings do not wish to know the details, thus resulting in cases of Indifference and Disgust.

An molecule of Trollium, the basic substance that all trolls are made of. The two outer atoms are its two vicious horns and in the middle is its hideous face which is characteristic of all trolls.

Trolls are hard workers, but are only known to work for Dark Lords, or "People Who Have Bigger Clubs." Many humans have asked Trolls of a certain favor or another. These humans are usually regarded as a tasty snack for the common Troll, and are eaten on the spot.

The flag to which trolls are supposed to swear their allegiance to...unless they don't want to in which case no one will care.

One notable gang of trolls, the Finnish band Finntroll, are noted for their blood lust, jungle music, and hatred of all Christians, Vegetables, and Bright Lights. The Troll-organized band made it to #2 on the underground music charts for their song "Rock and Roll and Stab," defeated only by Magus' single, "That Magik Feeling." Modern Trollish Music (M.T.M.) involves many heavy beats, and Trollish Wailing, either done by a soprano Troll, or a Banshee for hire. Trollish Dancing is also very common, sometimes required. 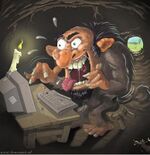 An instance of Trolling

The Modern Troll feels a need to become Organized. This means joining a club whose leader is a) the smarter one or b) "The one with the bigger stick." These organizations (or "Happy Clubs" in Trollspeak) are mostly devoted to creating Mischief. The most grandiose of these Happy Clubs is "We Make Bad," a web-based club which uses the internet to make the usual Trollish brand of chaos. Many other happy clubs have followed the example of We Make Bad, resulting in lots of useless junk the internet doesn't need. This phenomenon has become known to humans as "Trolling," or "Pissing people off on the forum." The Trolls call it "Stinkywrite," in tribute to their use of annoyance used to take over entire websites.

Internet Trolls were labeled as abominations to society & are now outlawed in thirty countries including the United States and Canada where trolls are becoming piss ants when they can't be conTROLLed.

Examples of Kinds of Trolling 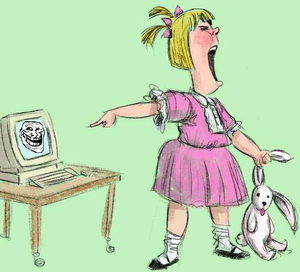 Some argue that one of the most successful trolls of all time, was that of which played on Oprah.

A troll posted a statement on Oprah’s online message board with the use of the over 9000 meme, the statement was as follows:

“We do not forgive, we do not forget, we have OVER 9000 penises and they’re all raping children”

Showing the typical sign of a middle aged person, on having no idea on how the internet works Oprah took this statement very seriously. Turning an Obvious troll into a successful troll. The aftermath produced massive lulz and several posters and videos. Thus obvious troll is obvious

The Troll National Anthem is sacred to all trolls everywhere and they are encouraged to spam the lyrics on every forum, message board, chatroom, walls of government buildings, school chalkboards, and anywhere else where it might offend or piss someone off. 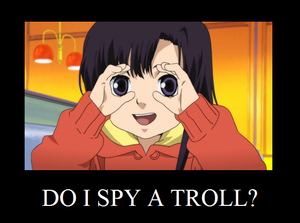 Trolls today live wherever they can. Most occupy the sewers of big cities, where they can easily access internet from ground lines. Trolls are responsible for more power outages than they given credit for. This makes them very angry, as "Electric Smell" is their favorite underground game to play. (The details of this game are still unknown to us) Many Trolls still live in the forest, but they are seen as outdated by the city brand of Trolls. Trolls are like animals, you should never feed them at any given time. There are a number of individuals who make a hobby out of spotting trolls in their native habitats, most often the wastelands of YouTube comments.