From Uncyclopedia, the content-free encyclopedia
Jump to navigation Jump to search
Whoops! Maybe you were looking for Fecesbook, or UnScripts:The Socialer Network? How about Twit book, or Defacebook? Possibly even Twitter?

“"FaceBook? Can all be traced back to one man - Mark Zuckerberg! Keep it quiet! ”

Facebook is one of the Internet's largest personal information repositories, launched in February 2004 and operated by Facebook, Inc. As of 2017, Facebook claims to have way more than 1 billion unique personal information entries. The site has literally taken over the world, with almost about 1/4 of the worlds population captured and recorded. It makes these entries available to its clients on a regular basis, which include advertisers, data miners, authoritarian governments and, on occasion, private individuals. Some people believe it is a start of a New World Order or something like that. The personal data is organized into individual entries called "profiles," each of which typically includes a name, photos, phone numbers, email addresses, marital status, and miscellaneous unique information. Profiles are further organized into groups, and linked by friends lists. Now we know who doesn't have a life. Minecraft is better.

For those without comedic tastes, the so-called experts at Wikipedia have an article very remotely related to Facebook. 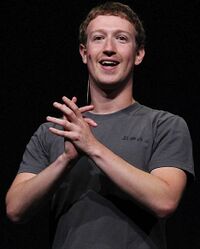 "It was all my idea!

For some leading up to 2004, Myspace was the dominant personal information database on the Internet. Most people over the age of 30 or so did not go on the site since they thought that site was weird and rather communicate with people the "old fashioned way" - maybe by writing letters and actually using a phone to TALK into. Most of the people on MySpace had some sort of bad hair dye job and an obsession with Hello Kitty. It hosted nearly twenty million individual profiles of personal information, the highest number of profiles ever seen at the time. However, its customers often complained that the flashy, poorly coded eye-rape that it called "profile designs" made it difficult to harvest the data contained on the profiles. Many of Myspace's profiles were decorated with hundreds of animated .gif files, brightly colored backgrounds, and blinking text. These and other elements caused headaches and eye strain among advertisers, who flooded Myspace's customer service department with complaints.

In February of 2004, a young entrepreneur and Harvard student named Mark Zuckerberg posted his beta version of a site called Facemash wherein users could rate the hotness levels of others' pictures. After attracting over twenty thousand views within four hours, Zuckerberg realized the untapped potential of the Internet's users, and quickly redesigned Facemash to expand its range of collectible information from simply photos to most of the categories that are available today, including names and phone numbers. He also renamed the site from Facemash to "Thefacebook", which was later shortened to Facebook. Taking note of the chief complaint about competitor Myspace, Zuckerberg designed Facebook to have a clean, easily readable interface that could not be clogged up with embedded YouTube gangster rap videos and pictures of glittering cats. 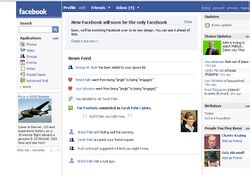 An example of a typical Facebook profile, that of John McCain. 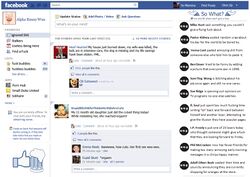 An example of a typical Facebook profile, that of normal people.

Facebook's source of income is selling access to its collections of personal information. It serves a variety of interests, the majority of which are advertising companies who use the data acquired from Facebook to push targeted ads across the Internet, including on Facebook itself. It also does business with data mining companies that seek to assemble their own personal profiles on people for their own reasons, as well as spammers that harvest e-mail addresses. Eventually, Facebook became large enough that national governments began to take notice, realizing that Facebook's treasure trove of personal information could represent a significant advancement towards their long-term goals of totalitarianism and despotism. Soon, Facebook began offering its services to authoritarian governments, such as those of China, Russia, and the United States of America.

While Facebook generally reserves its services for governments and the corporate elite, it has been known to occasionally do business with individuals. A well-publicized 2008 incident revealed Facebook's dealings with a British man who purchased access to his ex-girlfriend's personal information and used it to stalk her. Similarly, in 2010, three students at a New York high school pooled their college funds and bought the information of one of their classmates, which they used to blackmail him. Major news outlets have published news stories about employers who fire their employees because they said something on Facebook that the employer disagrees with. And while rumors have circulated about politicians using information obtained from Facebook to embarrass or discredit their rivals, no proof of such an incident has ever surfaced, although Facebook has not denied that they would be open to negotiating such a deal.

In order to entice potential clients, Facebook offers some of its personal information for free, making it easily viewable by anyone. Many profiles are publicly available, offering information such as names, locations, and photos. Other information, such as private conversations and phone numbers, as well as information stored on profiles that are not publicly viewable, can be accessed by clients that have a contract with Facebook.

Facebook collects its personal information from the unwashed masses. In exchange for token services offered by the company, users voluntarily provide their data to Facebook, who retains it indefinitely. As compensation for their personal information, Facebook offers its users such amenities as FarmVille, Mafia Wars, and monitored communication with other users. The deal has proven to be exceptionally beneficial for Facebook, which receives significant value in exchange for the mediocre services it provides.

A small selection of application examples from a user's notification center.

Facebook offers a number of features to its clients:

Facebook has become wildly popular, having overtaken Myspace in April 2008, and has received worldwide acclaim in the media. It has been praised for its exceptional customer service, its ease of use, and its complete lack of discrimination with regards to its business partners. It is ranked by Alexa as the second most popular website in the United States, behind competitor Google. In 2007, PC Magazine ranked Facebook among its top 100 data-mining websites. As of 2010, Facebook had won Crunchie's "Best Overall Startup or Product" award for three years in a row.

The unwashed masses, from which Facebook harvests its personal information, have had mixed reactions to the site. Some regard Facebook as the pinnacle of human evolution, and in February of 2011, an Egyptian couple named their daughter after the site. In May of the same year, an Israeli couple named their daughter after Facebook's "like" feature. On the opposite end of the spectrum, a number of critics have denounced Facebook as a tool of the New Corporate One World Order, and warned that its continued popularity will contribute to the downfall of civilization as we know it.

In 2008, the Collins English Dictionary officially declared "facebooking" to be a word, which means "selling your soul for bread and circuses."